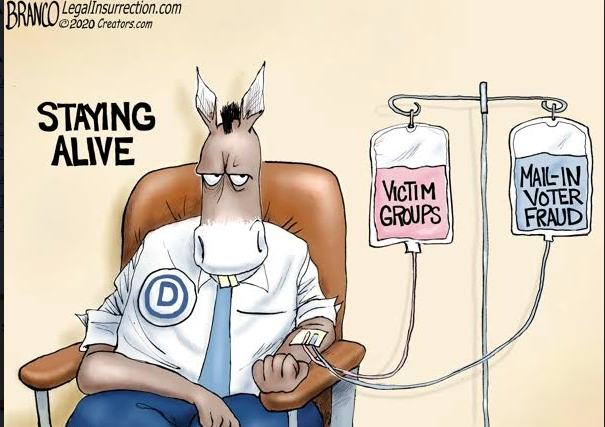 I remember in 1965 watching police attack blacks who were attempting to demonstrate for the right to vote. It was awful. No one who watched could have been anything other than appalled.

We’ve come a long way since then. Or have we?

Why aren’t people appalled today when they see blacks beating whites in the streets of America’s cities?

We are seeing racism rear its ugly head in America again.

The organization Black Lives Matter is the most visible example. But it’s just the ugly tip of the iceberg. Underneath is 60 years of progressive policies that have sought to appease blacks and make them dependent on government … keep them locked in underperforming schools … limit their job opportunities and ability to start small businesses … put their young men in prison for minor violations … and keep their young women single and bearing children without fathers.

There is racism all right. But it’s not the racism BLM’s Marxist leaders complain about. It’s the racism of low expectations in the words of Condoleezza Rice. It’s the racism of Democrats who don’t believe blacks can escape poverty, given a fair chance, freedom, and decent schools, without the help of elitist white saviors.

There is no question that 99.9% of Americans of all colors and races are appalled by the behavior of the four cops in Minneapolis who murdered George Floyd.

But this stopped being about George Floyd a long time ago. And it’s not about any other injustice done by police against unarmed blacks. Of 45 million or so black Americans, only 15 unarmed blacks were killed by police last year. Some were killed by black police officers. Most were violently resisting arrest.

It’s not about race. For the Marxist leaders of BLM it’s about remaking society. They believe the entire house is rotten and needs to be torn down and re-built from the ground up. They even want to destroy what’s good because it just hides what they consider unsalvageable.

To them, we miss the point if we defend Washington, Lincoln, Grant, Frederick Douglas, or even Martin Luther King. To argue that great Americans have worked, bled, and died to bring America closer to the ideal of equality and justice is to reveal our own racism and insensitivity to the foundational flaws that are endemic to America.

Democrat leaders are aware of this. Some share the sentiments. Others think they can use these radical ideas to gain political power. In either event, they are on board with the destruction.

Don’t believe me? When did Pelosi or Schumer last condemn the rioting? Joe may get a pass because he’s probably unaware it’s even happening. He knows only what others tell him.

Democrats in Congress don’t have that excuse. In fact, they aggressively moved to block a law enforcement reform bill because it was authored by Republicans. The bill would have provided national guidelines for proper police behavior, improved police training, and increased accountability by police departments. But Democrats realized passing it might deprive them of an argument against Trump so they chose to put politics above principle.

Progressive Democrat Mayors, Council-members, and Governors are on board as well. They’re cutting police budgets, restricting actions by police to defend themselves, and offering millions for discredited programs like midnight basketball.

BLM’s Marxists are an intricate part of the Democrat Party. They’ve made it clear their top political priority is replacing Trump with a Democrat president.

Democrats go along despite the damage it does to America or race relations because getting rid of Trump is their only concern.

Thirst for power has replaced concern for character and corrupted the Democrat Party beyond any previous party in our country’s history. The idea they’d ally with the Marxist leadership of BLM to gain power is proof enough of that corruption. But there’s plenty more evidence that could be submitted.

When it comes to the issue of race we have, indeed, come a long way since 1965. But recent events make that progress seem suddenly tenuous, like the hard won progress could be more easily erased than would have been thought possible just a few months ago.

We’re moving in a very different direction though on the goal of achieving our founders’ aspiration of freedom for all. On that score, we seem to be going in a very dangerous direction indeed.