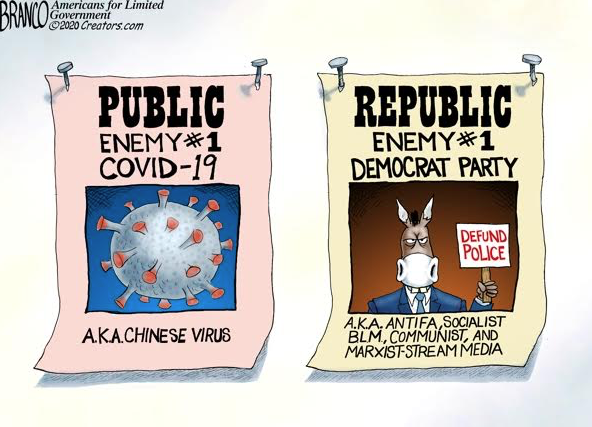 Democrats seem to think the best way to win the 2020 Presidential election is to make us more fearful, and our lives far more dangerous. They want to keep you indoors for fear the Chinese virus will snatch you away.  Meanwhile, they allow violent hordes of  ANTIFA and BLM rioters to roam freely.

The media are constantly telling us the protesters are peaceful, hiding the worst of the violence. They’re don’t want to cause a backlash against the liberals in DC or our state capitals and city halls who condone and encourage the violence.

A 26-year old mother of a 3-year old was gunned down because she told a group of “peaceful” demonstrators she believed all lives mattered. Imagine, a statement a year ago that would have been as innocuous as “good morning,” today gets you the death penalty.

That mom is only one of hundreds of examples of people literally or figuratively “cancelled” these days for being on the wrong side of the left’s favored narrative.

There there is the Chinese Virus. Politics make it hard to know what is what. The far left governor of California just shut down his state … again. No restaurants, no gyms, no theaters, no gathering inside, no making money, no haircuts etc.

But does anyone believe what the government says about anything? On a deaths per hundred thousand population basis, some of the states that shut down the most are the worst off. Those that are taking sensible precautions, but not shattering the economy in the process, are faring better. So far anyway. We don’t fully know enough to know what will happen and all the best ways to deal with it.

That’s one of the problems with the far left – maybe with us all – we don’t know what we don’t know. But the left is happy to force others to go along with what we think we know even if it’s not true.

Recently, a Japanese scientist said he’s found proof the virus is man-made and not natural. He contends that if it were natural it would have especially thrived in those placed with a similar climate to China. That’s not what’s happening. It spreads in ice cold weather and in hot and humid countries. He’s done extensive research on the virus. I don’t know if he’s right. We’ll see.

But we know this: The Communist Chinese government has used the global pandemic to consolidate its control domestically, as well as, extend its economic and military reach in unprecedented and dangerous ways. Good night Hong Kong. Indonesia and others in or near the South China Sea may be next.

Here’s another thing we know: The pandemic has given Biden’s team the perfect excuse to run the entire campaign from his basement. The media are happy to make excuses why Biden can’t come out and answer questions.

So long as Biden stays holed up and only takes the softball questions from friendly media, he’ll continue to do well in the polls.

Don’t be surprised when the Trump-Biden debates hit the rocks. Wherever they’re scheduled to take place, you can place a Vegas-sized bet there will be a sudden outbreak of the virus. The debates will be cancelled, Biden will complain like a little baby, but secretly he and his team will be thrilled.

If the Democrats can keep things stirred up enough while Trump sits in the Oval Office, if they can stoke the virus scare and keep the street mob howling, burning, and destroying: then the big issue this November will be safety. The candidate who promises he can restore order, and keep people safe from the virus, and safe from the mob will win.

In other words, the candidate who isn’t currently the president.

The problem, of course, is two-fold.  First, it won’t work; a mob of Marxists will always demand more. They want control, not concession.

Second, by the time Biden figures out he can’t give away enough to quell the violence, we will have lost our birth-right, Biden will have given up too much.

A Democrat presidency, whether it’s Biden’s or the presidency of whoever takes over when he is declared mentally incompetent, will leave a legacy of radicalism from which we may never recover. Law enforcement will have been negotiated away. Capitalism will have been transformed into a kind of fascism that leaves us all poorer and less free. The influx of illegal immigrants will overwhelm our cities, and our elections, as Democrats rush to give them the vote. China, Russia, and Iran will have displaced U.S. influence in International affairs. Our military will be gutted. The U.N. will gain greater control over our domestic affairs. And the curriculum in our schools will be radicalized.

Or there’s another option. Donald Trump in the oval office, and more Republicans in Congress, will stop all those things from happening.

Donald Trump won’t concede ground to those who do not want a civil society, who vandalize and destroy. Donald Trump will not allow foreign powers to militarily or financially invade our country.

Most important, a big enough win by conservatives will send a powerful message to Democrats: “clean your house of the radicals who have over-run and occupied it, or be prepared to lose till you do.”

A message that clearly says the defund, disarm, and demoralize strategy Democrats are pinning their hopes on won’t work is badly needed right now, and reason enough to reject Joe Biden in November.

Greenfield: Democrats Destroyed New York Once. They're Doing It Again.