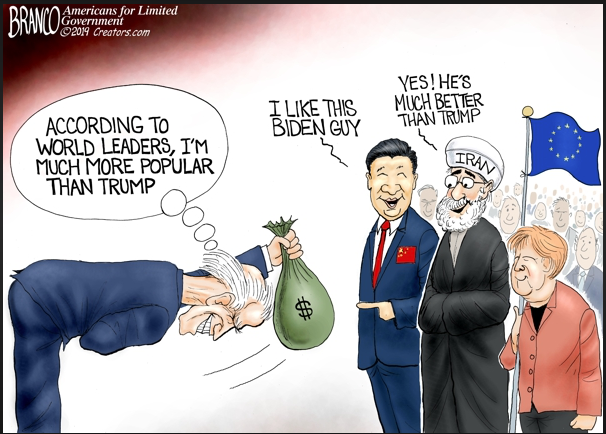 We can put a rover on Mars, a man on the Moon, and send a team to the deepest depths of the oceans; but we can’t stop a bunch of punks from burning down cities, attacking cops, and assaulting store owners. We can’t stop them from injuring over 1200 police, scrawling racist graffiti on streets and monuments, or murdering hundreds of Americans – including babies.

City after city has fallen to these thugs. Helped by far left Democrat leaders who have released convicts, suspended bail requirements, and complain that federal law enforcement are protecting federal property and American lives from the rioters. Progressive Democrats are also slashing police budgets, allowing cops to be overwhelmed, and letting rioters target the homes and families of police. Democrats are doing it all mostly because they hate Trump and think pandemonium and chaos are certain to undermine his leadership.

The Chinese were smart. They apparently knew their virus would so damage our economy it would seriously hurt Trump’s chances for re-election. It would keep Americans living in fear, lock them out of their routines, destroy their jobs, ruin their leisure activities, wreck their families, and isolate them from friends.

Only the very strong can cope with this pandemic for more than six months, before they blame the Commander in Chief. But, rest assured, whoever wins in November, the impact of the coronavirus will dissipate after the election. That’s because the Democrats – and the Chinese – don’t need the fall-out to last any longer.

In the meantime, basement-Biden keeps lying to the American people about all he’ll accomplish in his first days as President, despite his 50 years in high public office, achieving almost nothing.

It’s relatively easy to see the battle playing out on the Chinese front. Their U.S. allies are a bit harder to spot. They include leftist Democrats in Congress and state capitols, Hollywood, big business, and most of the news media. The Democrats and China share a common goal, make sure Donald Trump does not win in November.

Maybe we’ll see one day why Democrats are so willing to sacrifice the safety and prosperity of Americans in order to beat Trump. But for now, we have to hope Americans wake up and join together as citizens with shared values and ideals once again united under one flag, and one National Anthem, as the United States of America and not as the People’s Republic of America with a socialist economy, authoritarian government, and thorough contempt for freedom.

I understand China’s motives. Trump has repeatedly called them out for their unfair trade practices, currency manipulations, and baldly illegal attempts to expand their territorial control over the last 3 years. He’s negotiated new trade deals that have forced them to give up billions in income.

Without Trump in the White House, China is free once again to walk all over the United States, as they did when Biden was Vice-President. They’d love nothing more than to turn the United States into a new Hong Kong where freedom is a dirty word and speech is controlled.

America is under attack — by Marxists in China and by Marxists in the U.S. Their tactics are malignant, divisive, and violent. Fear is their strategy. That fear grows deeper with each passing day.

Americans are afraid to walk outside, afraid to meet strangers, afraid of being stuck in traffic, afraid to say what we think or believe. Jessica Whitaker, a 24 year old mom from Indianapolis, was enjoying a night out with neighbors when she said, “all lives matter.” Shortly after, a BLM thug who disagreed pulled a gun and shot her to death in front of her fiance.

Jessica is not the only victim of BLM, ANTIFA, and the other leftist radicals. Hundreds of American men, women, and children have been beaten up, stomped on, kicked, stripped naked, and left on the streets to bleed out while ghoulish bullies pick their pockets and laugh. Most of the victims have been white so you don’t read much about them. They don’t fit the leftist media narrative.

3 years ago, Democrat liberals raved about outside interference in our elections. Now they’re perfectly happy to allow a Chinese Virus, Chinese communists, and domestic Marxists, to disrupt this election. ANTIFA and BLM are both funded in part by George Soros. He is one of the biggest dark money sources for progressives and Democrats in this country and around the world. His goal, and the goal of those he supports, is to remove all Republicans from American public office, first among them Trump.

They also want to eliminate the police, take guns from all Americans not part of their own group, make all jobs union jobs, control all schools, and limit all speech. That’s how they’ll exert power – with weapons only they own, jobs they control, schools that indoctrinate, and speech that never disagrees.

If the Chinese Communist Party, ANTIFA, BLM, and progressive Democrats get their way, our country as we have always known it is gone. Government will control everything, and the radicals will control government. Everyone else will be at their mercy.

Every election is important, but with ANTIFA and BLM gaining strength among young people; Biden adopting most of Bernie Sanders’ and AOC’s far left platform, and China knocking at our door; no past election has been as important as this election.

One thing’s certain. the Chinese Communist Party and leftist Democrats have much to gain by beating Trump. But if that happens, the rest of us Americans will suffer.

Greenfield: Minneapolis Residents Agreed Not to Call the Cops, Then the Rapes Began

Greenfield: Foreign Companies are Interfering in the 2020 Presidential Election