Miscalculations in this regard will indeed end up doing more harm than good– to term affirmative action as progressive and well-intended is a grave mistake, for millions of deserving candidates may be put to an 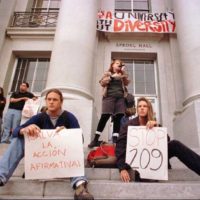 unnecessary test that builds up like gangrene in a system of inefficiency, a thoroughly acknowledged reality of affirmative action that legislators in California have embraced the Assembly Constitutional Amendment 5, proposition 16 (made possible by ACA 5) rips apart the equity-driven approach to admissions and hiring established back in 1996 by Proposition 209. The proposition made it mandatory to recognize students for their intellect and merit rather than base judgments on the color of their skin.

The text of Proposition 209 reads: “The state shall not discriminate against, or grant preferential treatment to, any individual or group on the basis of race, sex, color, ethnicity, or national origin in the operation of public employment, public education, or public contracting”.

If anything, a backward stroll towards Affirmative Action will only strengthen the racism that everybody is toiling hard to remove. By further pointing out differences, drawing lines between students, and discriminating (under the pretext of inclusiveness), legislators are choosing to not stay true to the commitments they made to uplift the community as they entered their office.

While Proposition 209 did not eliminate racism as a whole – this certainly cannot be expected of a singular legal provision alone when that what the cause requires is a popular and collective action on the social side – it did encourage an increase in enrollment and inclusion. Graduation rates have been higher (doubling in UC San Diego, from 26% to 52% in the case of black students); grades have also improved. It isn’t just the data pertaining to African American students that show the pros of Proposition 209 – the overall enrolment of Latino students had increased by more than 9% from 1998. Asian American enrollment rate increased to 41.3% in the same period. But, this improved in the following years over 20% of African American students earning a GPA of 3.5 or more.

Had Proposition 209 been as scandalous as California’s legislators claim it to be, such visible constructive changes would not have materialized.  These figures prove that we do not need affirmative action back in play. To provide actual equitable opportunities for every single student in the country, reservations in any form to Proposition 209 must be kept aside. Proposition 209 was clear with respect to the objective that the proposed amendment laid down: “The state shall not discriminate against, or grant preferential treatment to, any individual or group on the basis of race, sex, color, ethnicity, or national origin in the operation of public employment, public education, or public contracting” It was crystal clear – quotas are not a solution to a problem as deep-rooted as racism.

Michelle Steel chairwoman of the Orange County Board of Supervisors, candidate for congress in CA48:

What we cannot and should not do, in our ultimate quest for equality, is to reinstate racial discrimination. Particularly when we’ve seen that a policy of non-discrimination is actually lifting up Black, Hispanic and Asian Americans. Eliminating Prop. 209 will divide us further along racial lines. It will reverse decades of merit-based advancement for all and promote unequal treatment based on race in California. This division is exactly what we seek to eliminate in the United States.

The Civil Rights Movement, spearheaded by Martin Luther King Jr., strived for equal treatment and opportunities for all – in straying away from this core idea today, the promoters of ACA5 have proved themselves to be an embodiment of irony. They call for inclusion yet uphold their reservations on discrimination. Most importantly, their persistent attack against the proposition 209 is unfounded – Gail Heriot, a professor of law at the University of San Diego points out that before the 1996 amendment, only one black student had a GPA of over 3.5 in the freshman year.

Judging a monumental decision by relying on one’s vested interests, the University of California Board of Regents unanimously endorsed Assembly Constitutional Amendment 5 (ACA 5) as well as the repeal of Proposition 209, which banned the consideration of race and gender in admissions decisions a quarter-century ago. The votes from the governing board of the world’s preeminent public research university underscore the proactive need to help address systemic and perpetual inequalities in public education, these Reagents – politicians are carving a deep abyss for the younger generation. There remains no doubt – ACA-5 was ill-thought-out and it needs to be questioned.