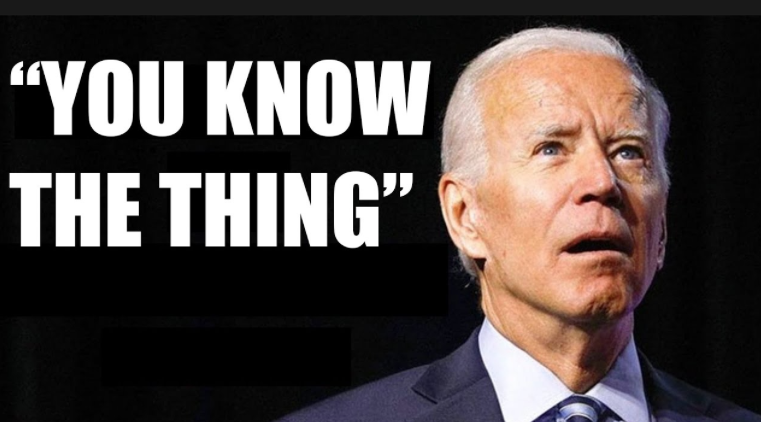 Back when Joe was still campaigning for the Democrat nomination, he tried to recite the Declaration of Independence at a rally just ahead of Super Tuesday. After 8 words he stumbled badly, couldn’t remember what he was saying, and resorted to, “you know, the thing.”

Biden won that primary, but not because of cogent arguments or sound reasoning.  And while we may know “the thing,” it seems increasingly clear Joe Biden does not.

The paragraph from the Declaration Biden couldn’t remember concludes, “that all men are created equal, that they are endowed by their Creator with certain unalienable Rights, that among these are Life, Liberty and the pursuit of Happiness.”

If Biden understood these words, he’d know that his increasing slide to the far left goes exactly contrary to “the thing.”

Instead, Biden has empowered radicals and socialists to carry his banner as he carries theirs.

In fact, Biden is now promoting leftist policies he would have thought inexcusably radical just a few years ago. It’s clear Biden will far exceed the economy-destroying, culture-ruining, country-devastating policies of Obama-Biden.

Here’s some questions all Americans should be asking Joe Biden.

First, Joe, do you really believe more money going to a bigger government will create more and better paying jobs in the private sector? Will you even protect the private sector from the socialists in your own party who want to destroy it? Or will you roll over for the far left on economic issues as you have on the issues of climate change, government health care, and taxpayer funding of abortion? (To name just three.) What did you mean recently when you said you didn’t just want to change America, but “transform” it? That’s exactly the same talking point Bernie Sanders, Ilhan Omar, and Alexandria Ocasio-Cortez use when they talk about replacing free markets with government control.

Second, Chicago has some of the toughest gun laws in the country but still the highest rate of shootings and gun violence. Do you really believe taking guns from law abiding citizens as you have suggested, and your anti-gun czar, Beto O’Rourke, has demanded, will lead to less crime against the innocent? Do you honestly believe cutting police budgets will make people safer in high-crime neighborhoods? Why don’t you repudiate those in your party who demand we completely dismantle law enforcement in this country?

Last, does it bother you at all that the exclamation we all agree with, black lives matter, has been co-opted by a group of Marxists who run the organization Black Lives Matter? Are you at all concerned that communist radicals like BLM and ANTIFA have huge new influence in your party? Or that their stated and public goal is to tear down all the institutions in America and rebuild them in the image of a failed Marxist philosophy? Can you name one Marxist or socialist country in the history of the world that has succeeded? Just one?

Joe, you’ve stated you’ll solve the problem of race in America in your first few weeks. You’ve promised to end poverty. You’ve even said that as president, you’ll cure cancer. But if you have the answers, why didn’t you provide them during your 40 years in high government office?

Joe Biden won’t answer these questions. He can’t, and not just because of declining mental acuity. Truthful answers would not produce votes for him. And it’s increasingly clear that’s all he cares about.

Biden, and his allies – Obama, BLM, the media, ANTIFA, and Democrats in Congress – have literally dogged President Trump since the day he was elected. In attempts to remove Trump from office, cover their own corrupt actions, and stop as many of his policy initiatives as possible; they’ve investigated, harassed, bullied, impeached, and lied.

Everything they’ve tried so far has failed. Their charges have been proved false.

Given 4 more years, America could expect the brightest future we have ever known despite the Marxists and socialists who are fighting him at every step.

Biden’s handlers know if America figures that out, Biden will lose. That’s why they keep him locked down in his basement, and why they are working very hard to avoid debates. Imagine Biden, in his degenerative mental state, debating Trump for 3 hours.

Twenty years ago Biden would not have tolerated the nonsense espoused by the communists who run Black Lives Matter. He wouldn’t have gone along with silly notions like defunding the police, putting government in control of health care, forcing insurance companies to provide contraceptives to nuns, tearing down monuments of George Washington and Abraham Lincoln, cutting off black access to charter schools, banning energy independence, or destroying millions of jobs for America’s poor and middle class by supporting a Green New Deal that replaces freedom with socialism.

I’d like to believe that if Joe had seen the economic growth 20 years ago we’ve enjoyed under Donald Trump, he would have signed on to make it even better.

Why the change? Why is he siding with, empowering, and agreeing with the most radical in his party – communists and socialists like Bernie, AOC, BLM, and the Squad?

Is it because Biden thinks he can use them to get votes? If so, he’s not just suffering from confusion and severe mental decline. He’s blind to the fact that liberals have been trying that for decades and are only now realizing that the radicals they thought they were using were actually using them.

The far left has taken control of the Democrat Party. And if Biden is elected President, he won’t be able to stop them from destroying our country. If he even cares to try.

The Russian Roulette of the Cancel Culture

The 1619 Project Part 4: President Lincoln and the Civil War