A few weeks ago, the Muslim Congresswoman from Minnesota called for police departments to be defunded. Now, she’s saying that’s not enough.

Ilhan Omar was born in Mogadishu, Somalia, a particular hell-scape even for that part of the world. Her family fled from Somalia, and she spent four years growing up in a refugee camp on the Somali border. The United States agreed to provide asylum to Omar’s family when she was 13.

Since then, she’s led a charmed life. Omar attended grammar and high school at U.S. taxpayer expense, graduated from North Dakota State University, and attended the University of Minnesota. Now Omar is a Member of the United States Congress.

Omar has much to be thankful for. Instead, she wants to tear down the country that welcomed she and her family, and, in the process, deny to others the same opportunities she’s enjoyed.

Omar makes no bones about it. She’s a socialist and wants the government to take charge of our economy despite the fact it has produced more wealth for more people over a longer period than any other economy in the history of the world.

Omar also wants to eliminate immigration controls so millions more Muslims come from countries like the one she’s from – where the government controls the economy and has made life a living misery for their people.

Bill Clinton brought tens of thousands of Muslims to the United States including Omar and her family. Obama brought 40,000 more. If Biden wins in November, Omar and the other leftist Democrats in Congress will insist on a new flood of Muslim immigrants.

Omar became a U.S. citizen at 20. There’s no record anyone ever asked her what she believed about America, whether she understood economics, or agreed with the Declaration of Independence, or the Constitution.

Omar ran for Congress from a section of Minnesota known as “Little Somalia,” called that because of the number of Somali refugees who live there. Sadly, for the American people she’ll likely be reelected by her fellow refugees. 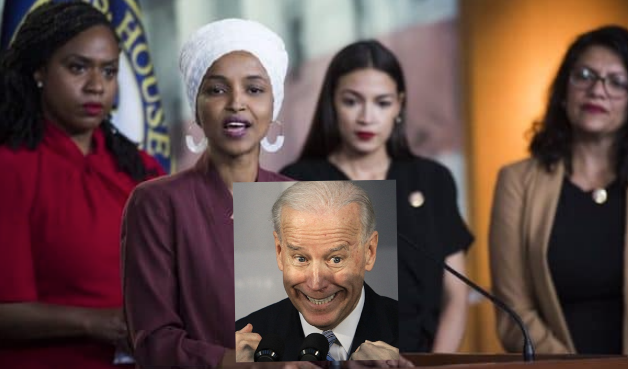 Even more sadly, she’s not alone. Her fellow “squad” members, Rashida Talib and Ayanna Presley, have introduced federal legislation to defund police departments and pay reparations to any black person hurt by a police officer – whatever the circumstances. It’s called the Breather Act.

Imagine those we elect defunding police. Talib said of the bill that we can begin to envision law enforcement that enhances public safety.

How does that kind of thinking make sense as we’ve watched crime skyrocket in the last few weeks?

In New York, the homicide rate is up 23% over 2019. In Chicago, America’s murder capitol, homicides jumped 39% during the last week of June and first week of July. Crime and murder in Los Angeles have increased by double digits.

Why the spike in violence? Look no further than absurd laws by progressive politicians. Thanks to De Blasio’s no-bail program, New York has released thousands of criminals with no bail required including a man who attacked 3 police officers. Not surprisingly; murder, assault, rape, and robbery are all reaching levels not seen in NYC, and in other cities across America, in more than a quarter century. It’s not hard to figure out. Fewer police means more crime!

The forth member of the SQUAD, Alexandria Ocasio-Cortez, popularly known as AOC, supports progressive policies such as single-payer Medicare for All, tuition-free public college and trade school, a federal job guarantee, the cancellation of all $1.6 trillion of outstanding student debt guaranteed family leave, abolishing U.S. Immigration and Customs Enforcement, open borders, ending all privatization of prisonsand closing many others, enacting gun-control policies, and energy policy relying on 100% renewables.

The cost for all of this is somewhere between 10-15 TRILLION dollars.

Joe Biden has made AOC a senior advisor to his campaign. He recently released a 2 trillion dollar Green New Deal proposal co-written by AOC which includes a massive expansion of government control.

Biden has already made clear, AOC will play a key role in his administration.

It’s not a stretch to call AOC, her friends in the squad, and those in Congress who agree with them, the soldiers hidden inside the Trojan horse of anti-Americanism. There is no part of our economy, our culture, our education system, or our government they don’t want to burn to the ground.

Despite the success they’ve personally experienced, they detest America and our way of life. They give ingrates a bad name. Which begs the question, what the hell are they doing in Congress collecting $175,000 per year while hating the hand that feeds them?

We have to send a message to the entire Democrat Party. We have to defeat Joe Biden and every other Democrat on the ballot – especially the so-called moderates.

If Biden wins and more Democrats are elected to Congress, the left will be emboldened. And history shows us that even the Democrats who don’t agree with them will appease them with concessions galore.

If Biden and the Democrats win in November, it will only be a matter of time before Ilhan Omar and her friends make America look more like the hell hole she came from than the nation that provided her so much success.

Bevelyn Beatty: Why I Painted Over the BLM Mural in NYC

Greenfield: Democrats Destroyed New York Once. They're Doing It Again.