This year, we celebrated the 244th Independence Day of the United States of America. The Declaration of 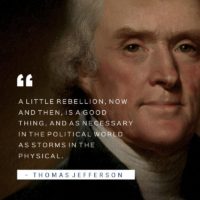 Independence was adopted on July 4, 1776; Thomas Jefferson was a Founding Father of the United States who wrote the Declaration of Independence.  Jefferson drafted one of the most beautiful and powerful testaments to liberty and equality in world history, in Jefferson’s original draft, its immortal words remain essentially his own: “We hold these truths to be self-evident, that all men are created equal, that they are endowed by their Creator with certain unalienable Rights; that among these are Life, Liberty, and the pursuit of Happiness.”

The nation must remember, in unison, the service of the millions who’ve laid down their lives in sacrifice to stay true to the ideals of liberty laid down in the Declaration of Independence, the ultimate symbol of American civil liberty. Prejudices must be shattered and so should the reservations that keep one from doing what they ought to do. These men and women who’ve lost their lives; these people who’ve carried memories of war into the doors of their houses today; these families who mourn the deaths of their children, spouses, parents – they need to be handed the honor that we often promise, but always fail to deliver.

In November of 1919 President Woodrow Wilson commemorated Armistice Day now acknowledged as National Veterans Day, “To us in America, the reflections of this day will be filled with solemn pride in the heroism of those who died in the country’s service and with gratitude for the victory, both because of the thing from which it has freed us and because of the opportunity it has given America to show her sympathy with peace and justice in the councils of the nations…”

Recently speaking on another commemorative veteran Memorial Day California Governor Newsom said that an opportunity for Americans to “take time to reflect and remember those that sacrificed their lives for the cause we hold dear, and that’s our freedom”. To this, he added – “And it is appropriate, despite this pandemic and all the strife, the challenges, all the consternation that it brings, that we take this time together with our family and our loved ones to reflect and to remember.” Indeed, it’s an opportunity to reflect on the efforts that have been implemented to ensure that the Veterans, many of whom reside and consider the state of California their home.

Now Newsom has suggested the funds that were allocated to Cal Vet ($24 billion) set aside for a Veterans cemetery in my hometown may be in trouble. The pandemic could be used as an excuse to jeopardize the funds for our military memorial and cemetery. A private partnership between a developer “FivePoint” and local government has announced today they are pulling funding for the cemetery and have refused requests to appear and explain why.

In 2018, the city of Irvine, California was to receive its first Veterans Memorial Park and Cemetery at the “out of commission “El Toro Marine Base (ARDA site). Had the memorial and cemetery issue not become a stalemate that had been banked on heavily by reservations held by private players the city Mayor Shea and the developer FivePoint this project would have been completed years ago?

Over twenty odd years, the debate over where to institute this symbol of tribute had been progressing with no action ensuing. This year, things were looking good for our veterans, residents, and with the City Council on a vote finally 4 to 1, the self-appointed Mayor Shea the only dissenting vote. With a vote to adopt the terms laid down in the Veterans Cemetery initiative as presented by the petitioners – there seemed to be hope and trust that the project would actually take off, after the perpetual period of status quo at the “ARDA” site.

But once again the Mayor has come under scrutiny; speculations suggest that her nod in assent was to fill her war chest from the developer instead of establishing the Memorial Park and Cemetery on that sacred ground by diverting attention and stopping the project from materializing. The Mayor’s plan was to hand the veteran’s cemetery and memorial site – 125 acres to the long-time developer on a “99-year lease” to encourage commercial development. The developer has already constructed residential buildings along the periphery of the hangar site.

The revered base in Irvine has long served as a site for the burgeoning of a symbiotic relationship between the politicians and developers. For the former, pocketing beefy amounts is the attractive prospect while for the latter; it is the chance to build multi-million-dollar residential complexes on lands that have been subject to many disputes over years of politicizing and lobbying. The camaraderie that political forces share with commercial big-weights is no new tiding. However, when an unnecessary status quo slowly settles in and concretizes in a region that could’ve been turned into a memorial for veterans, it becomes vital to question the morale pursued by such public-private partnerships that get installed.  It may also play at every chance it has to profiteer and ultimately, the commoners are being forced to bear witness to this unruly political game. The El Toro Marine Corps Air Station is yet again turning into the stalemate that it was before. Orange County California has 137,000 veterans with no place to call home.

We have more than twenty million veterans in the United States; these are the people who gave up parts or the whole of their own lives to protect our country. There were no second thoughts when they decided to do this – it was selflessness that drove them to place their people before themselves; the country before themselves. The American legacy is, indeed, founded on these altruistic feats achieved by men and women who marched ahead to secure our freedom through all seasons and turbulences. What better way to honor and celebrate these heroes on the Fourth of July – no independence ever sustained unless liberty is secured; until we’re free; until our minds are free of concerns? And this freedom of our nation is shaped progressively by the contributions of our veterans – be it the revolutionaries who drove colonial clasps out of our land or the military personnel who continue to uphold American sovereignty today, they deserve every bit of our respect and gratitude.

But, how long is it going to take until we can, with absolute certainty claim that we’ve honored our veterans in a manner that they truly deserve? When can we say that we’ve been able to secure their memories and remember with grace? The initiative unfolded by governments has been plagued with fissures and dents here and there; benefits haven’t been transferred to the hands of the worth up to and including for the establishment of a veterans memorial and cemetery.

The former El Toro Marine base is intrinsically linked to the veterans of Southern California. By creating a veteran’s cemetery on its grounds would allow veterans to have their final resting place on the very ground where many of them worked tirelessly to serve our country. Remember merely waving flags on a specified day and speaking words of gratitude only to later retreat to the comforts of one’s leisure, is not going to help secure good standards of living or sacrificing one’s life – the ordinary people who went on to do the extraordinary in war and defense. It is in these moments that one thinks, in disgust, of the political impasse that gets dragged into matters of welfare and betterment.

To The Heroic Dead, By Anonymous

While the graves with flowers we strew,

As a tribute to the service,

Given to the land by you.

You who noble lives did give,

That our flag and country’s honor,

Guarded by the spirits bright,

Our old flag waves proud as ever,

Flag of liberty and right.

Green thy graves shall ever be,

You shall ne’er forgotten be.

Now that Independence Day is over, may the meaning behind it allow us to ruminate on what can be done for our selfless heroes. It’s time to go beyond words.

Some Possible Character-Building Benefits of "National Service" for All