America’s founding and Declaration of Independence from our British overlords was one of those lynchpin moments that come around every so often in history. To that time, the British Crown was the great high empire that was controlling most of the world. Their naval prowess and control of trade was second to none but, that did not stop the American Colonies from breaking away from the British Crown and declaring themselves a free people and nation. From that spark, came a waterfall of writings and events that have shaped world history even to today.

When I think of the men of that time who declared independence on behalf of the colonies, I am overwhelmed with a sense of awe. These men, particularly Jefferson who wrote,

We hold these truths to be self-evident, that all men are created equal, that they are endowed by their Creator with certain unalienable rights, that among these are life, liberty and the pursuit of happiness. That to secure these rights, governments are instituted among men, deriving their just powers from the consent of the governed.

Laid the foundation for the movement toward freedom and independence not only for nation-state but for the individual. Jefferson’s draft of the Declaration of Independence went as far as to speak of the evil of slavery as follows,

he [the King] has waged cruel war against human nature itself, violating it’s most sacred rights of life and liberty in the persons of a distant people who never offended him, captivating and carrying them into slavery in another hemispere, or to incure miserable death in their transportation hither.

It is quite clear that from the beginning of this nation, patriots like Jefferson were against the practice of slavery and as such, wanted to establish a nation that would once and for all transform the historical practice and abolish it’s existence. Jefferson and Washington are held up by this nation as pillars of good. While they were in fact slaveholders, they did what they could within their historical setting to be able to eradicate the practice out of existence. Jefferson was a brilliant man who knew that without a strong declaration of the colonies to the Crown, one that was agreed upon and that unified the colonies, no “America” would emerge from the ensuing war. 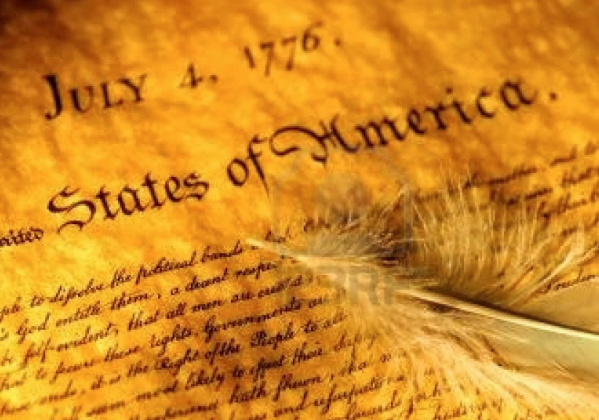 Too many colonists had a vested interest in the slave trade and were not willing to give up the practice immediately. Too many of the Southern colonies in particular were unable to part with the practice even though they knew deep down in their heart that it was wrong. What to do? How does one declare that “all men are created equal” and at the same time hold men as slaves? While reconciling these two questions in a modern context is impossible, Jefferson, a man way ahead of his time knew that the fight would be better fought once the country came out from under British Rule than force the issue upon declaring independence.

As we all know, it took a little under 100 years for the practice to be eradicated and abolished in the United States. Many people will point out that it took the Civil War for the practice to be eradicated but, one would argue that the practice was already dying a slow and steady death by the first expansionary mission of the United States as evidenced by the Northwest Ordinance of 1787. This Charter document approved by the Congress of the United States (Under the Articles of Confederation) specifically stated that slavery was not to be allowed in the newly settled territory. The evidence is quite clear that while slavery was certainly a horrendous practice, the men of this nation, from its inception, had the desire to continually work towards abolition and eradication of the practice.

Think about it, if the founding of this nation were as evil as many of the marauding mob of “intellectuals” pillaging us claim of an America that is a racist, hate-filled nation, were correct, would it not make sense that the practice would have been completely endorsed upon expansion not forbidden? If this country had a desire to enslave a race of people into perpetuity, would it not seek its expansion as far and wide as possible? I think we all know the answer. Yes, the Civil War fully eradicated slaver but, from the inception of our nation the practice was dying an inevitable and desired death.

This 4thof July, I am grateful for my country. I am reflecting on a nation founded by imperfect men who sought equality of opportunity for all. This Independence Day I am meditating on our responsibility as heirs to what the Founders gave us, a roadmap to a more perfect union of states and people that would always strive for more and to be ever improving the lot of every single American.

Why We Celebrate Independence Day