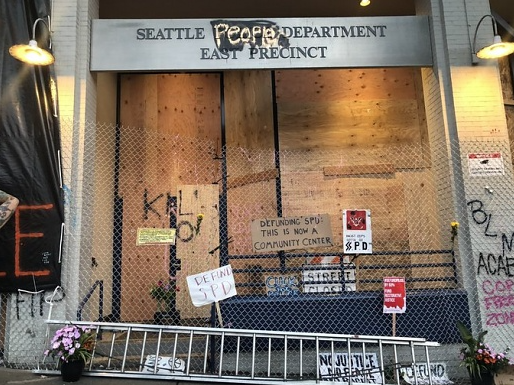 Over the course of the last approximate ten days or so, the world has been eager to watch the entrance of a new nation-state on the scene. This newly formed nation within the borders of the great American city of Seattle, known affectionately to its citizens as “CHAZ” (Capital Hill Autonomous Zone), has officially seceded from our Union of States and has claimed it’s independence. No vote on the secession was had, no proclamation from the Seattle Mayor, Washington State Governor or The President of the United States could be found to back this newly created denizen of Antifa but, it seems to be accepted by those of the co-opted area so ladies and gentlemen, we have a new nation to welcome onto the world scene.

We in the United States should welcome this opportunity to watch a newly formed nation crop up in our midst. This is an important event in history that can be highly informative as these children playing fort, I mean these new citizens decide what should be vital at the start of a new nation. While many would think of food supply, water supply, and sanitation as quite possibly the most important and basic needs of a newly establish utopia, the citizens of Antifastan went in a completely different and revealing direction, they went for borders. It was curious to see these burgeoning statesmen and women decide to erect the structures they were so vehemently against for so long while citizens of the United States.

For many decades, and most recently during the Trump 2016 Campaign and Administration that followed the President’s election victory, we were told by the left’s most vocal and ardent supporters that walls, specifically border walls, do not work. Those in support of a strong and secure border were called racists, bigots, not empathetic and compassionless. How could we who believe that borders are of the utmost importance to a sovereign nation, erect a large wall to our Southern Border with Mexico to keep out the hordes of immigrants who were crossing into this country illegally? How is it possible that we can be such knuckle dragging savages with no heart for the plight of those less well off? It was never about security we were told; it was always about “living up to the ideals of America.” 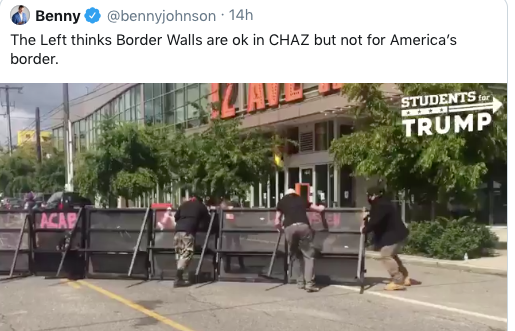 Introduce our newest member of the world community, Antifastan. Upon establishing this new nation, many of the organized mob decided that they would need lines of demarcation that would establish borders with their great enemy, the United States of America and her unwelcome citizens. With great haste, the citizens of Antifastan took sections of fencing, barricades and cars and positioned them to act as “border walls” with the US. If that wasn’t ironic enough, after walling off their newly created country, they decided to create multiple layers of border security through, you guessed it, checkpoints. These checkpoints are guarded by armed members of the Antifastan security force who are armed most often with everyone’s favorite weapon of choice, the AR-15. If you do not answer the questions of the armed security force at the Antifastan checkpoints around their border walls, your “visa” is immediately revoked and you are “deported” from their midst as an unwanted entity.

In review, a newly formed country filled with radical left wing militants and communists decided that their first move in statehood would be to secure its borders with multiple layers of demarcation or, border walls and, decided to protect said borders beyond just a mere wall with armed security at various checkpoints. When a person does not meet their liking, the security force will deny their entry visa and will send said unwanted back to the United States.

While the irony of this should escape no one, we can see that when reality sets upon people, they tend to default to systems that, while they were quite critical of them as citizens of the USA, are embraced in order to protect their new nation. These pioneers of nationhood have come to the reality that in order to properly establish and maintain a nation, you need borders that are walled off, protected by armed security, and vet all entrants to preserve your nations way of life. I recognize that liberals of all shades will not be able to understand the absolute perfect irony of how this has unfolded. It should be instructional to liberals and the left that even the most radical elements on the left realize that with nationhood and sovereignty comes the requirement for strongly enforced borders.

What is good for the new nation of Antifastan should certainly be good for America as well. Build that wall, Mr. President. Build it high and build it beautifully to protect the greatest country in the world, The United States of America.