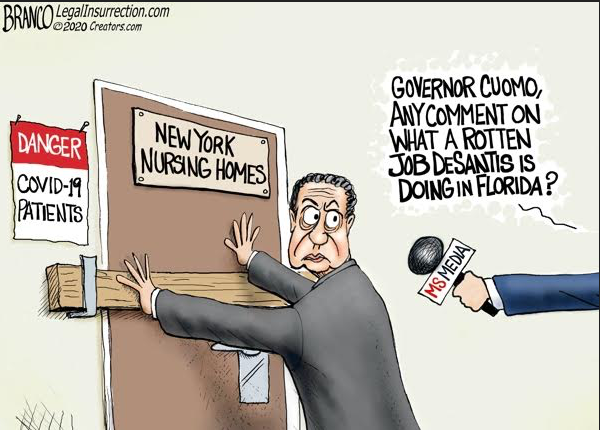 Remember the Wizard of Oz?  During his reign the wizard was also known as, “Oz, the Great and Terrible.” In the books, the wizard turns out to be a con-man from Omaha who manages to convince the people of Oz that only he can ease their fears and address their problems.

Sounds a lot like many of our politicians these days, doesn’t it? Especially progressives who believe everyone must follow their petty dictates to the letter or face the music.

Phil Murphy, the governor of New Jersey, banned meetings of recovering alcoholics, but demanded liquor stores stay open. This is the guy who turned New Jersey into a sanctuary state, costing taxpayers millions in additional services for illegal immigrants and protecting those who commit even violent crimes from federal immigration authorities.

The Governor of Michigan, widely considered a possible running mate for Joe Biden, not only decided which stores would remain open but what they could sell. She forced Home Depot to block off the sections that sold paint, grass seed, and American flags. She also mandated that a married couple may not ride in the same car. The rules, however, were more flexible as they applied to her family. After telling Michiganders they couldn’t drive to popular shore-side destinations to go boating, her husband called the marina where he keeps the family boat and tried to convince them to drop his boat in the water ahead of those who were already in line. He and his governor-wife live 200 miles away.

A slew of governors have banned religious services. Apparently they’re threatened by the idea we may pray to a higher power than them. As of this writing, no church for you if you live in Michigan, Pennsylvania, Illinois, Virginia, New Jersey, Oregon, Washington, California or New York. Some are now backing off thanks to pressure by the DOJ.

Over a typical weekend in Chicago, 25 people or more will be gunned down. Nearly half will die. But the Mayor of Chicago has ordered that police make sure churches are closed and church goers are arrested rather than focus on the real crime happening all around her.

The Mayor of New York says police will jump in the ocean and arrest those caught swimming. And if it happens too often, he’ll put a fence around the beach.

It would all be so humorous were it not so sad.

We haven’t allowed our freedom to be so trampled since the days of the British occupation more than 200 years ago.

Examples go on and on of the great and terrible power of Governors, Mayors, County Executives, and even unelected bureaucrats who detail what we can and cannot do.

In truth we were warned. Under the Obama Administration, the operative rule was, “never let a good crisis go to waste.” It’s a notion leftist authorities at the local level have adopted. They’re using the very painful Chinese Virus to shred our Constitution and remake our government. It’s government of the government for the government and by the government.

It’s not just their draconian lockdowns either.

U.S. Senator Kamala Harris, another possible Biden VP choice, has introduced a bill that makes it a hate crime if you call the current contagion either the Chinese Virus or the  Wuhan Virus. Never mind that’s what they are.

First, it was the Chinese Communist government that lied about the virus in the first place, then let it spread around the world without telling anyone. 100’s of thousands are dead and whole economies are in trouble because of the great and terrible Chinese government. Calling them con-men would be kind. They’re thugs.

Second, it’s not racist to say so. The fact is the Chinese people are as much victims of the communist thugs who run China as the rest of us. If anything, now is the moment to admit the truth, call the Communists what they are, and come to the aid of the people of Hong Kong and Taiwan whose independence and freedom are being threatened by China’s communist government.

The problem is that progressives like Kamala Harris identify more with the people running the government in China than they do with the people being oppressed there or here. They’re more comfortable in the role of oppressors.

And talk about the great and terrible Oz, Joe Biden is right there with them. Since this pandemic started, he’s pretty much sat in his basement issuing one condemnation after another about Donald Trump’s handling of the virus. Given this is Joe’s 4th run for president, it’s more likely he’s doing this out of ego and entitlement than a deep desire to help his fellow man.

Years from now people will still be looking back at how this short and terrible period of time changed our country and the world.  Lots of books will be written. Some scholarly, some fiction. Many will be portrayed as the former, but will be mostly the latter.

Whatever they write, I hope it ends with the curtain being pulled back to reveal the truth about those who are using this crisis to remake America. They’re not great at all.  But what they’re trying to do is truly terrible.

Imago Dei: We Are All Created in His Image

An Unjustified Path of Violence