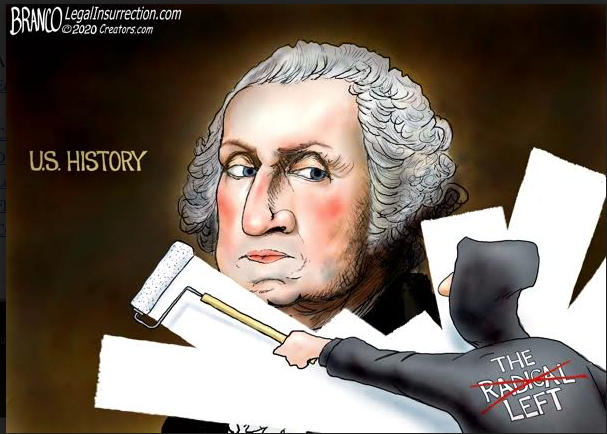 It has now become quite clear that the left-wing radicals in this country have decided to decimate everything and anything that has ties to the country’s greatness. On June 19, 2020, Mayor Bill DeBlasio, after declaring Juneteenth a city holiday, announced that he is forming a commission to give New Yorkers a platform on Race. The newly formed blue ribbon committee, ironically named “The Racial Justice and Reconciliation Committee,” will include hizzoner the Mayor and his wife, Charlene McKray. Outside of the fact that these two are completely inept and reprehensible, overlooking the fact that the Mayors wife cannot account for $850 million of NYC taxpayer money she was responsible for overseeing, we cannot in any way accept that these two Communists are remotely interested in preserving American History in any way, shape or form.

The Mayor has stated that the purpose of this commission is to seek “truth and reconciliation”, but whose truth? The problem with this is that any commission whose purpose is to seek truth is going to have to have members with a diversity of opinions and facts to lead to contextualized history and truth. Having a commission that includes to far-left Communists on it should lead to an interesting review of American history. The gaslighting that we are experiencing now from the left, the “accept it or you’re a racist” radicalized demeanor, is only the beginning. First we can anticipate a completely new history being told from the perspective of two America hating individuals in the name of “Racial Justice” and then the next step, “Reconciliation.”

Here is where things get very scary for someone with a discerning mind. The idea of reconciliation assumes that there are “sins” to be atoned for and reconcile against. While no doubt, slavery was unjust and certainly caused great suffering for people who experienced slavery, 360,222 Americans, a vast majority of whom were white and fought for the North, died to end slavery during the Civil War. Under a Judeo-Christian view of the reconciliation process, spilled blood was generally required. One can and should look to the sacrifice of 360,222 Americans as the spilled blood required to “atone for the sin of slavery” but this is consistently overlooked by those who seek reconciliation.

The problem with continuing to run with the narrative that this “original sin” of the country requires reconciliation is that no one has defined what the procedure is to atone. If the spilled blood of Union soldiers wasn’t enough, or even the combined spilled blood of all Americans during the Civil War, a whopping 618,222 Americans, what will be?

This is where you get the blank stares and the overwhelming amount of open-ended assertions around “healing.” I would love to live in an America where we are held accountable for the things we actual do and where we are judged by the content of our character. Part of living in that America is finding a way to move beyond the past injustices faced by many and toward a nation where we do in fact forgive. America 2020 did not cause for America in 1776 but, America 1776, did cause for America 2020. This is a fact that the statue toppling mobs seem to miss. While slavery surely was not a just practice, its abolition was due to the Founding Principles of this nation. America 1776 is in whole, not in part, responsible for all the freedoms we all have today and that fact, cannot be ignored.

If that question cannot be answered in detail, no commission, committee, or other left-wing invention is going to be able to get finality. That question must be answered specifically, in detail, not filled with platitudes but real solutions that the marchers want to see accomplished. To tear down statues, revise history, and erase the pathway that has led us to today is quite wrong and accomplishes nothing. All it shows is a left-wing penchant for destruction. The logical end to this was already seen during the high-times of the Communist Revolution. The purge of history and the past did not stop with statues, it stopped in prisons and graves of people who disagreed.

While one is not suggesting that those screaming about the past wrongs of racial injustice are calling for that end, without the willingness to forgive America 2020 for America past, we are just spinning the never-ending wheel of “race” as an issue.  Let’s start thinking about the solutions that the protestors want to see, the concrete action items they want as “atonement” or else, they are just using

“The Racial Justice and Reconciliation Committee’s” as a way to “fundamentally transform America” into something it is not. I can assure you this much, the American people will not accept a Communist takeover of the nation couched in race. This is where we need to push back. You want a conversation on race in America, fine but, do not for one second think that We The People are going to allow a Communist Coup occur through the Trojan Horse of racism. The statues must stand and history must be a tool for learning, not something to be earased.