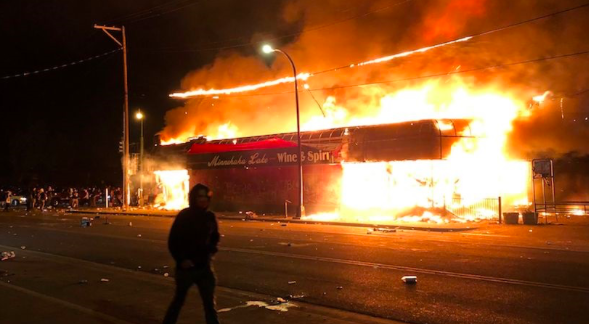 We all have a responsibility to speak out against injustice. We all have the responsibility to petition our government when we are wronged. Protests are certainly part of the fabric of this country’s history, to deny as much would be foolish. From the Civil Rights Era marches, sit-ins and boycotts, to the Suffragettes Marching for their right to vote, people have achieved great feats in the name of justice through protest.

What we have seen as a reaction to the death of George Floyd at the knee of Derek Chauvin may have started as a peaceful movement and has now quickly turned into complete and utter chaos. Injustices committed in the name of Injustice certainly achieves nothing for the cause of Justice and will never redeem those who are directly impacted by the rioting, looting, burning of their businesses. These people who had nothing whatsoever to do with George Floyd’s death, while not dying themselves, have seen their life’s work taken away from them in the name of Justice. Where is the Justice in that?

Throughout our Country’s history, one can observe a rich tradition of petitioning the government to cure injustices. Those that have had the most impact were those that were able to change hearts and minds all over through peaceful displays of resistance to the injustice they are seeking to eradicate. The Civil Rights Act was not a response to rioting, looting and massive damage being wrought but, as a reaction to a man who stood on his principles, rooted in the Word of God, who said, enough. While MLK’s words have recently been twisted to suggest rioting is okay, one would have to stretch that suggestion quite thin for it to even come remotely close to possible. King used non-violent means such as marches, boycotts, and profoundly deep speeches meant to shake people’s foundational beliefs and have them transform their beliefs without one ounce of violence and yes, he held onto his Bible through it all.

We as a nation have unified around the fact that George Floyd’s death was not justified. We as a nation see that injustice and want justice served. Our legal system has not only taken custody of the perpetrator and charged him with Murder, the other officers who were a part of this interaction have been fired with charges likely to come shortly. In our country, justice is handed out through our legal system through deliberative and specific action that leads to being able to establish the charge, beyond a reasonable doubt, which happens to take some time. While emotions are high and anger charged to the brink, it is easy to be upset at the process taking course but, the alternative, “mob justice,” flies in the face on what justice is truly about. Equal justice under the law requires that every suspect, no matter how obviously guilty, be treated the same under the law.

Peacefully protest the officers actions. Peacefully protest the injustice wrought by their direct action or inaction. Having peaceful and just protests devolve into cataclysmic damage to a city because of perceived inaction amongst other reasons, that is wrong. When violence is brought into a protest, that protest has now turned into a riot. Police have the responsibility to protect and serve their community, especially where the community is at risk for mass destruction and citizens for bodily harm. Simply allowing cities to be destroyed is the easy decision where politicians are more concerned about their police departments doing their job rather than hurting the sensibilities of an incoherent mob of violent thugs. Mayors of the great cities of America should be ashamed of their performance thus far. Quenching riots and preserving law and order is what these politicians swore to do. To date, they have shown they are abject failures.

We as a country have a decision to make. Will we decide to allow a raucous crowd of rioting domestic terrorists rule the streets at night, or will we decide to restore law and order? Will we as a people tolerate mass injustices being wrought throughout our cities or will we call our leaders to task regarding their lack of response and ineptitude? Freedom, liberty, and opportunity are only had in a society where the rule of law is respected, and everyone is treated equally thereunder.

Peaceful protest, of any kind, should be lauded as the example even where there is disagreement with the core of the protest itself. We have seen many instances of peaceful protest recently related to George Floyd’s death and we should encourage those protestors to continue to fight for what they believe. However, we must also take a firm stand against violence being poured out on our great American cities in the name of injustice. All citizens, including the politicians we elect, should be uniting around the call for an end to violence by these ruthless raging rioters. No politician should allow their cities to be burned to the ground and stores of innocent people be looted in the name of any alleged grievance.

In the end allowing injustice to flout around and dance in the streets of your city and making believe it is anything but injustice shows ineptitude, lack of leadership and finally a lack of capacity to keep your promise to the citizens you swore to protect. One hopes that the Mayors of our great cities will finally decide to end this violence because too many more people lives, and property are at risk of destruction. We will see which Mayors, Governors, etc. decided that law and order is what serves justice not wild mobs who seek to destroy. Life is about growth and creation not destruction and despair. We all need to call for an end to this ongoing violence, by the means required, to ensure that we all receive equal justice under the law.

Greenfield: How to Make Your Own Race Riot