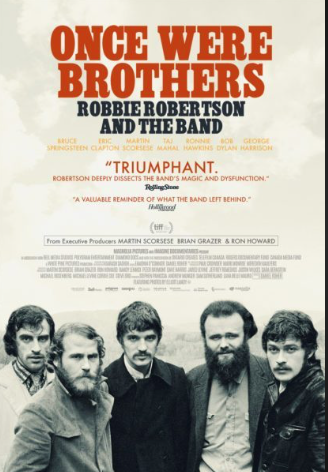 The film “Once Were Brothers: Robbie Robertson and The Band,” is loosely based on Robbie Robertson’s intriguing 2016 memoir, Testimony.  There is a second volume of this memoir in the works by Robertson.

This is not a documentary on The Band in the traditional condensed, Rock doc sense.  It is deeper, more inspiring and far more human than that. This film serves to remind us that The Band was composed of five very talented individuals and not just Robbie Robertson.  In the telling of his personal story, Robbie effectively pays tribute to his band mates.

For the uninitiated, The Band was composed of four Canadians,Robbie Robertson, Richard Manuel, Rick Danko and Garth Hudson, and one American, Levon Helm.  The rose to International prominence with the release of the 1968 seminal album, “Music From Big Pink.” They followed this work with their classic sophomore release, titled simply, The Band.  In 1968, they had already been playing bars, honky-tonks and joints for 8 years. In their time with as Bob Dylan’s backing band, they played in theaters and auditoriums.They were five very seasoned professionals who played many different instruments between them.

From 1970 through 1976, they released five more albums. The first two albums were  great influences on American/World music and created the genre that we know today as Americana. On Thanksgiving Day, 1976, after considering the continuing dangers of the road, The Band gave their final concert with the aforementioned lineup. The last concert was titled, “The Last Waltz,” featuring such friends and influences such as Muddy Waters, Van Morrison, Eric Clapton, Bob Dylan, Dr John, Ronnie Hawkins, Joni Mitchell, among others. Their farewell concert was filmed by filmmaker, Martin Scorsese. This film was also titled “The Last Waltz,” and was released in 1978, with an accompanying soundtrack. Their final album under the original lineup was titled, “Islands,” which was released in 1977. The Band reunited in 1983, without Robertson, and continued to release albums and give great performances until 1998.

To say The Band changed the face of music would be an understatement. They directly influenced contemporaries such as Eric Clapton, The Beatles, The Rolling Stones and other musicians. Their approach was antithetical to the excess of most of the Rock and Roll in 1960’s and 1970’s. They embraced an approach that emphasized ensemble musicianship as opposed to lengthy guitar solos or extreme stage theatrics.

Once Were Brothers tells the story of Robbie Robertson. From his being raised in the Cabbage Town section of Toronto Canada to his early childhood musical influences. Those first influences came from his Mother Dolly’s relatives on the Six Nation Indian Reserve. A bit of background: Robertson was born on July 5, 1943 to Rosemarie Dolly Chrysler,  a Cayuga and Mohawk woman and a professional Gambler named Alexander David Klegerman.  Klegerman was of Jewish descent and was killed in a hit and run accident when Robbie was an infant. Dolly eventually married Jim Robertson. He worked with Dolly in a jewelry plating factory in Toronto.

Once Were Brothers helps us to understand that Robbie Robertson was a child impacted by the great  explosion of the first wave of Rock and Roll. Robbie was influenced by his cousins and older relatives on the Six Nations Reserve to play guitar. Rock and Roll and the influence of Post War II Blues gave Robbie something to play, something to aspire to.

The film further details Robertson’s quitting high school to join up with American Rockabilly legend Ronnie Hawkins as one of his Hawks. Robbie was schooled by Hawkins drummer Levon Helm in both musical and street moves. They were like brothers. Hawkins had made a home for himself in Canada and found the hours to be better than in America. They lived on the road between the two countries, but spent more and more time in Canada as time went on. As the southern contingent quit and went home, the ranks of the Hawks were replaced by fellow Canadians Danko, Manuel and Hudson, creating the foundation of what became The Band.

Early in the film you are gripped by the story of Robertson and his and Helm’s desire to be the best band around. The Hawks quit Hawkins and played Rock and Roll and the Blues under a rarity of monikers.  Their reputation as a great band reached the ears of Bob Dylan. Once Were Brothers also detailed the struggles they faced backing Bob Dylan.  Especially in consideration to Dylan’s audience and their adverse reaction to Dylan’s creation of a visionary form of Rock and Roll. Dylan and the Hawks were booed for their efforts.  This was because of Dylan’s early Folk fans and their narrow perceptions regarding the use of “electric” instruments.  All the while making a good living at it, getting booed, worldwide.

The film further details Levon Helm’s leaving The Band after their first concert tour with Dylan.  He did not like the boos.  When Dylan had his motorcycle accident in 1966, the members of the Hawks joined him in Woodstock, New York. There they rented a modest house, nicknamed Big Pink, in Saugerties, New York and worked with Dylan on what became  known as the Basement Tapes. They also reunited with Helm and started working with him on the music that lead to a contract with Capitol records and the Big Pink album.

The Band did not act like the standard, first flush of success Rock and Rollers. These were mature men that had played all over America and Canada before their mid twenties.

The film features interviews with music luminaries such as Eric Clapton and Bruce Springsteen.  They and others help to articulate what was special about The Band.  The Band was a truly a sum of it’s parts. They had in their musical arsenal three distinct singers in the voices of Rick Danko, Levon Helm and the great Richard Manuel.

Any of those  three voices could have been the basis of a powerful band on their own.

Organist/multi-instrumentalist Garth Hudson was crucial in the musical landscape that was The Band.

Robbie Robertson’s song lyrics were like landscapes of America.  Richard Manuel also wrote a few classic songs such as “In a Station.” As a fan, Richard was my favorite voice in the group.

However, in the interview segments of this film, the real star of the film is Robbie Robertson’s ex-wife, Dominique Robertson.  She is an eloquent voice for this film.  The Band started their careers as a group that seemed to avoid the trappings of Rock and Roll and tried to remain anonymous.  That didn’t happen.  Fame came and Danko, Helm and Manuel all developed problems with drugs and alcohol. Dominique, now an Addiction Recovery Specialist, has a special insight into her friendships with the three singers of The Band.  They were not musical figures, they were friends.  Ms. Robertson is the heart center of this film.

In closing, this film is Robbie Robertson’s love song to The Band.  He articulates, in a mature manner, what drove the group to success and what drove them apart.

I feel that Robertson is, at turns, honest, proud and, at times, haunted by The Band’s legacy in this film.  He is especially honest about his later relationship with Levon Helm that was fairly acrimonious on Levon’s part due to disputes over song credits.

Once Were Brothers, was made by Canadian filmmaker, Daniel Roher.  Roher is a documentary filmmaker who has been making films, at times independently, since 2011.  I feel that Roher is one of the best documentary filmmakers working today.  His use of still photographs and archival footage in this film is stunning.  As a lifetime Band fan, who thought he had seen every photograph, much of the photos and film footage I had not seen before.  Completed in 2019, this is one of the most human and loving music documentaries that I have ever seen.  The three main Executive producers are Brian Glazer, Ron Howard and Martin Scorsese.  But this film has many astute hands attached to it. It is distributed through Magnolia Films and is available through all commercial retailers.

Only two minor criticisms, there are no extras in this DVD. No booklet, no extra features on the DVD itself.  Perhaps that will be addressed in a deluxe or revised version in the future? Robertson, Danko, Helm and Manuel are addressed with an appropriate amount of detail in the film. Garth Hudson, who unlike Danko, Helm and Manuel is still alive, is given short shrift in the context of the film. Again, maybe that will addressed in the future. Two crucial critical points in the context of a stunning documentary.

Whether you are a lifetime Band fan or are new to their music, this film belongs in your collection.

Barry Shaw: Muslims Can Pray in Jerusalem. They Only Have to Come in Peace