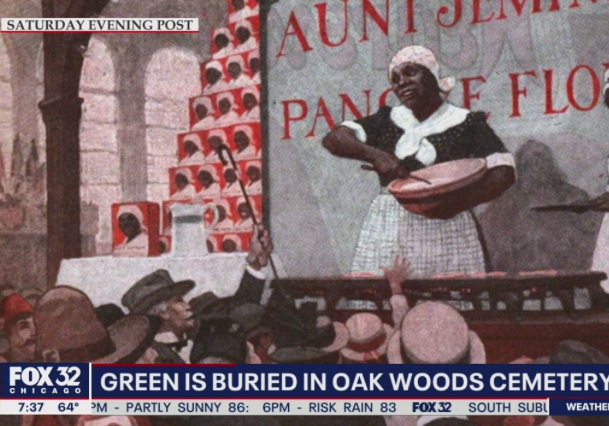 We could all learn a lot from a woman of humility, grace, and good will.

Nancy Green is a well known American even though she died nearly 100 years ago and isn’t know by that name.

The world knew her as “Aunt Jemima.” Nancy Green was born a slave in 1834 in Montgomery County, KY who became a superstar in the advertising world, as its first living trademark.

Green was 59 years old when she was hired as the spokesperson for a new ready-mixed, self-rising pancake flour. Three years later, Green was introduced as Aunt Jemima at the Chicago World’s Fair.

She was a great storyteller, her personality was warm and appealing, and her showmanship was exceptional. She was also a great cook and served pancakes to so many people at Aunt Jemima’s world’s fair booth that special security personnel were assigned to keep the crowds in order.

Nancy Green was signed to a lifetime contract, traveled on promotional tours, and was well paid. She was extremely popular wherever she appeared. Her financial freedom and stature as a national spokesperson enabled her to become a leading advocate against poverty and a champion for equal rights.

She was also one of the founders of the Olivet Baptist Church in Chicago, and one of the first black missionaries.

Nancy Green was a remarkable woman. Could she have found reason to take offense? Who couldn’t? Especially a black woman at the turn of the 20th century. But she knew well that anger wasn’t productive. Her kindness, warm personality, and humility made her popular everywhere she went, with people of every color.  But it was her enduring faith, sense of personal responsibility, and dedication to hard work that made her an effective activist for equal rights and anti-poverty programs.

Sadly, leftwing activists who don’t know their history, claim her image on syrup and pancake mix is racist.

Worse, the leadership of Quaker Oats and its parent company, PepsiCo, have decided to bend the knee and signal their “wokeness” by eliminating Nancy Green’s image from their products, and trash the name all together.

An associate professor of African American literature at Cornell University, said on the Today show this week, “It’s an image that hearkens back to the antebellum plantation. … Aunt Jemima is that kind of stereotype that is premised on this idea of black inferiority and otherness.”

But for those who know Nancy Green’s story, the reality is exactly the reverse. Nancy Green was a wonderful example for all Americans, no matter their color. She’s also an example of how to be a force for good by putting aside the grievance and offense to which we are all vulnerable.

Those are lessons a whole lot of white kids, black kids, and brown kids could benefit from. Look at all the good this woman born in slavery achieved. “If she can do it, so can you.”

But the truth is progressives don’t want blacks to believe they can rise out of poverty by hard work and personal responsibility. In fact, they count on African Americans staying in their place — inner city ghettos with lousy schools, little opportunity, and too few jobs.

Ironically, the corporate executives that progressives claim are society’s greatest villains, have signed on as accomplices in holding blacks down. In signaling their virtue by bowing to political correctness, they miss a valuable opportunity to give a generation of black youth hope with a lesson about the greatness of historical figures like Nancy Green.

It’s a new kind of stupidity. It’s why blacks continue to suffer at the hands of progressives more interested in getting their votes than moving them from poverty to prosperity. It’s the kind of division and hate that would repel Nancy Green.

Anni Cyrus: The Riots in the Context of My Own Enslavement

Long Overdue: We Absolutely Should Make Juneteenth a National Holiday