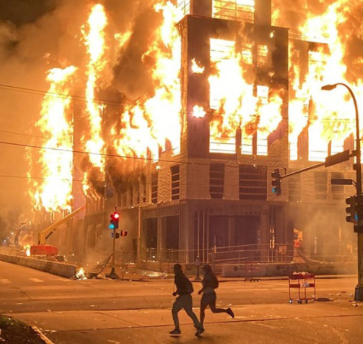 If you’re one of the seemingly few people left who depend on things making some level of sense from one day to the next, this is NOT going to comfort you.  But if you are part of the leftist, progressive, ANTIFA, police-hating, Trump-hating, BLM leadership; then this will make all the sense in the world.

In several states, mostly on the coasts, if you get arrested for just about anything short of murder, you’ll go to jail, be processed, then let go.  In many cases, they do little more than take your name, grab a photo, smear your finger prints, solicit a promise you’ll show up in court, and then send you on your way.

If, while you’re out, you’re arrested for another crime, you’ll go through the same process. Apparently, this rinse and repeat cycle can happen a nearly infinite number of time.

In New York City, a particularly well known felon had been arrested 5 times for robbing banks only to be released 5 times, each time adding to his bank repertoire.

Even in states with slightly greater concern for separating the violent from the law abiding, you had a good chance of getting out of jail free thanks to the Chinese Virus. The concern criminals might be attacked by the virus is apparently greater than that citizens are nearly certain to be attacked by recent convicts.

Don’t try to reason it out.  Fair warning, though, it gets worse.

Following the last 10 to 14 days of rioting – as we witnessed looting, firebombed police cars, police headquarters being over-run, people throwing bricks at the heads of cops, retired cops being murdered, on-the-job cops being gunned down and run over, businesses being destroyed, ATM machines being hauled off, and cities burning – we’re now told by politicians and activists that all police are bad and all the rioters are simply expressing their justifiable anger.

It’s certainly true the killing of George Floyd was DISGUSTING, IRRESPONSIBLE, AND SHAMEFUL. We really don’t know yet whether race was a factor or not. If it was, then it’s worse. But whether the cops involved were racists or just bad, the one who murdered Floyd and the three others who didn’t stop him are all charged with murder.

Despite the fact the system is working; the offending officers are on their way to trial, and if convicted by juries will go to prison; Black Lives Matter and their ilk are still in the streets chanting, “WHAT DO WE WANT? DEAD COPS. WHEN DO WE WANT IT?  NOW.”

It’s a little frightening that demands for the immediate delivery of bodies in blue aren’t being thoroughly rejected by politicians, journalists, religious leaders, and all the other higher ups who typically serve as guides and guards of society’s norms.

Instead, excuses are being made. Justifications are being offered. And some really insane policy proposals are being given more than lip service.

And by insane, we’re talking the stuff that should absolutely keep you up at night wondering just how long we have left before the entire country comes to an end.

Foremost among the insane ideas being taken seriously is the elimination of police. It’s not just the usual suspects of the loony far-left like Maxine Waters, AOC, and Ilhan Omar either. Mayors like Eric Garcetti of Los Angeles, Bill de Blasio of New York, and almost the entire City Council of Minneapolis are climbing on board.

The alternative to police? Some say social workers are better suited. Others advocate for “safety management personnel – whatever that is. Still others have stepped forward and offered to replace the police – Black Lives Matter has suggested they’re the perfect substitute.

You might as well appoint the Crips and the Bloods to protect and serve. Un-trained, Un-vetted, and Un-disciplined. Most certainly Un-concerned with your constitutional rights. Even the suggestion that BLM, or social workers, or “safety management personnel” can replace properly-equipped police well trained in self defense, individual rights, and criminal law is madness beyond comprehension.

Any chance we have to remain a free society absolutely requires the ordered and consistent enforcement of rules we all agree to. Foremost among those is the idea that the same rules that apply to us regular folks, also apply to those who lead us, and to those who enforce the rules. When that idea is challenged, then yes, we get bad cops who do terrible things.  But we also get burning cities, looted establishments, and mob violence. It happened because politicians  didn’t adequately invest in police training. And when the bill finally came due, they told police to stand down, keep arrests to a minimum, and don’t interfere with rioters and looters.

The results were tragic. Dead cops. Murdered and beaten shop owners. Razed neighborhoods. And $10’s of billions in lost and destroyed property.

Still, leftist politicians are deferring to ever more insane demands by a radicalized rabble.

Ironically, it’s the only thing in all this craziness that makes any sense. Progressives have been in charge of most of our major cities for more than 4 decades. Their leftist policies and corrupt self-dealing have killed job creation, limited opportunity, devastated schools, destroyed family creation, and abandoned three generations of young people to permanent despair and poverty.

The progressives have turned our cities into living hells. They have much to answer for. Bending the knee to the thugs they created is only the beginning.

Brandon Straka: Should Whites Kneel Down and Beg Black People for Forgiveness?

Kneeling to Black Lives Matter Instead of God