It all began August 26, 2016 when former 49ers quarterback, Colin Kaepernick, decided to sit on the bench while the national anthem rang through the stadium. Kaepernick decided that he was going to sit during the anthem as a form of protest to bring attention to police brutality, particularly against people of color. Initially, the gesture went by somewhat under the radar but eventually, it caused a leaguewide controversy ending in the owners banning kneeling during the anthem and Kaepernick no longer being in the employ of any National Football League team.

Until recently, kneeling had been once again restored to its rightful place in human history, a sign of reverence or submission, most often seen when people are in prayer, submitting to their God. 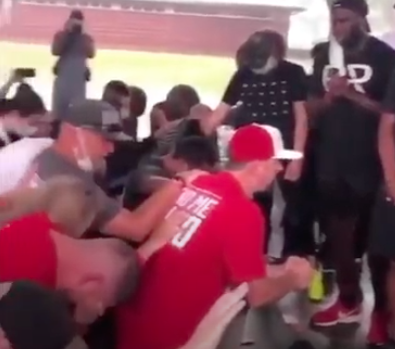 In the wake of the death of George Floyd, where Minneapolis Police Department Officer, Derek Chauvin, knelt on Mr. Floyd’s neck for well over 8 minutes, we have seen a resurgence in kneeling. Droves of people have been spotted kneeling to Black Lives Matters Protestors around the United States. These “kneelers” have claimed that they are kneeling in solidarity and respect for people of color who are being brutalized by the police. Furthermore, some of these “kneelers” go so far as to kneel before people of color as a way of atoning for the “past sins of the United States.”

While no one can deny in any way that slavery as an institution was tragic and no one in their right mind can defend the practice in good conscious, one must ask, am I guilty of this “sin” based on my skin color? And, if I am guilty of this “sin” because I am white, am I supposed to now genuflect to the people who are many generations removed from this “sin?”

First and foremost, lets again repeat, because it is worthwhile to be clear, slavery was not right, not fair, and not just. In no way shape or form should one human ever own another human. The thought of slavery is antithetical to everything we as a nation were founded upon by way of our principles even though, the practice wasn’t fully eradicated until the Civil War. In no way do I accept the arguments that slavery and the generations that followed did not adversely effect people of color in this community. Especially after recent conversations with a newfound “friend,” I think it is important that we clearly denounce the practice and the reverberations through the generations. I also think that in 2020, even where people still harbor prejudice against people of color, or vice versa where people of color have prejudice against whites, we as individuals have a responsibility to make it better.

What do I mean by make it better? First, we as individuals, white, brown, black or any other color need to accept where we are in life. This might mean saying, “okay, I am poor, and I may never be a multimillionaire, but I have a responsibility to make the absolute best of my current lot in life so that my family can have a chance to move up in the hierarchy of society.” I’m not claiming its that easy. I’m not claiming that it will not be an uphill battle. I am however claiming that accepting where you are and making an attempt to change it is the first step.

Second, we as a society have to lend a hand to people who are not like us, black or white, and be the person that can change their life. If someone comes to you to make a connection, make it. If someone asks you to be there mentor, accept. Even better, go volunteer with underprivileged youth who you might help shape into the next great American.

Third, we need to improve people’s lot through education, namely vouchers and charter schools expansion throughout the country, expand and incentivize urban opportunity zones, and finally, continue to reform our criminal justice system that has taken far too many people off the path of upward mobility and has doomed them to a life of misery.

This is where we start and excel. Narrowly focused, narrowly tailored programs and incentives to revitalize both broken communities as well as those who reside in them today. Give them hope not despair, give them a chance at a future. One may be asking, “what about the kneeling?” Im glad you asked.

The kneeling is out of the question for me. I kneel only for my Lord and Savior Jesus Christ. I worship and commune with him in prayer on my knees and as such, he is the only being that deserves the honor of my knees bending in reverence to him. No man should be forced to “bend the knee” in 2020. We are far too evolved as a people to go back to that practice. Bending the knee should be meant for times where you voluntarily surrender yourself to your God, or a time like a proposal to your future spouse. Kneeling to another man in atonement for sins you have not committed is a sorry and shameful display. Worse is it, that people have used this practice as a way to force people into submission and make they themselves feel powerful. This newfound “wokeness” causing the kneeling to others will not be met very well outside of the lines of the protests, that is my estimation. Again, as for me and my house, we will serve the Lord and only kneel for him.

In sum, this country remains the greatest country in the world. Anyone who says otherwise, has a right to their opinion but, I would challenge them to identify a country who has helped more people to achieve prosperity, freed more people from despair, and ultimately always tries to right itself when it gets off course.

The American experiment is surely not perfect, to say otherwise would be a lie. Those however, who seek to destroy the country based on “all the bad” in our past versus focusing on ways to make it better for all going forward have certainly missed the mark. I implore all of us as Americans, to recognize our fellow citizens humanity, black, white, brown or other color, love them with all of your heart as Jesus commanded, and work together for a more perfect America, not pointing fingers at each other but, pointing fingers forward.