Where will the basement brats, reborn as left-wing Antifa thugs, strike next?

The answer is simple: in a neighborhood near you.

A Twitter account spoofing Antifa called on the goons to leave downtown Chicago just days after the disturbances began and spread out into the predominantly white suburbs, or “the white hoods,” as the tweet called them.

Just hours later, the goons arrived with their brickbats and jackboots in Latino neighborhoods previously immune from the riots, and in nearby white suburbs.

In tony Santa Monica, California, looters assauled a woman in broad daylight. A man jumped out of his truck with a hockey stick to defend her, and promptly was mobbed and beaten himself.

And Monday, the mob returned to Lafayette Square in Washington, DC, and attempted to tear down the statue of Andrew Jackson, the racist father of today’s race-baiting Democrat Party. 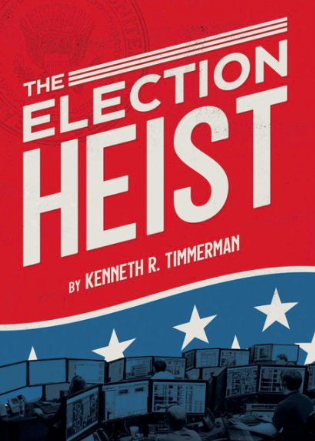 When I see videos like these, for me it’s very familiar – because I wrote these scenes in my new book, The Election Heist, which I sent to my publisher last November.

I’m not claiming to be a prophet, but I do believe that fiction precedes reality. By that, I mean that by using our imagination, we can apply patterns of observed behavior to future situations.

Let me give you a specific example.

On the night of June 5, a Minneapolis pawn shop owner shot and killed a “suspected looter.” Police later took the pawn shop owner into custody and booked him on murder charges.

A similar scene takes place in The Election Heist, which as I say was turned into my publisher last November. In my book, protestors have camped out in front of the State board of elections in Tallahassee since the November 3 election, which remains undecided.

At night, the Antifa thugs all looked alike. They were dressed in jeans and black hoodies and black bandannas covering their faces and had inked out any bright spots on their running shoes. They emerged out of the darkness of the giant live oak trees in knots of four or five, suddenly charging in total silence until they found their target. They first hit the broad bay windows of the Florida Chamber of Commerce, shattering them with baseball bats, then went next door and attacked the Florida Health Care Association. Another band emerged from the darkness of Kleman Plaza and swung their bats at the front window of Andrews restaurant, then ran across South Adams street and smashed shop fronts. They had reached the brick and glass-fronted FEA building when the owner of the Andrews caught up with them.

“Stop where you are or I’ll shoot,” he shouted at them.

He was half in a crouch, legs spread wide, two hands gripping the 9mm Beretta in front of him. The last of the four kids turned to face him, gave him the finger, and started to whirl around to run away with the others when he fired and the kid went down.

Andrew Santiago, the restaurant owner, flicked on the safety and stuffed the handgun in his belt. Then he pulled out his cell phone and dialed 911 to report the incident.

The next morning, Santiago was all over the local news. Some were calling him a hero for standing his ground against the Antifa thugs; others called him a cold-blooded murderer and demanded his arrest.

Florida has stand-your-ground laws that reassert the constitutional rights of citizens to self-defense, but many other states do not. As we have been witnessing in cities across the country where police and civilian leaders have abandoned territory to “peaceful protestors,” without law and order, society quickly collapses.

Antifa and like-minded groups are not just capitalizing on this collapse: they are actively promoting it. President Trump’s announcement that his administration would be designating Antifa as a domestic terrorist organization under US Code Title 18, Section 2331, has had the immediate effect of unleashing the full force of the Justice Department and the 56 regional Joint Terrorism Task Forces against the organization.

That is a lot of investigative and prosecutorial muscle.

But to be truly effective, the feds need to go after the money, go after the donors who are providing these anarchist groups with resources to tear apart our society.

As recent undercover videos by James O’Keefe and Project Veritas have shown, Americans could be in for some surprises when they learn that powerful people of great wealth may be among them.

Kenneth R. Timmerman is The New York Times best-selling author of “Deception: The Making of the YouTube Video Hillary and Obama Blamed for Benghazi” and other books on Middle East politics. He was nominated for the Nobel Peace prize for his work on Iran in 2006. His latest book, The Election Heist, is a political thriller, forthcoming from PostHill Press.