In the wake of George Floyd’s death, on May 25th in Minneapolis, there have been various proposals to defund the police departments in some of the more liberal bastions of America. The first one that comes to mind is in the City of Minneapolis itself. Minneapolis is being promoted as a “proving ground” for this exercise in applied lunacy. Part of the push in Minneapolis comes from their Congressional Representative, Ilhan Omar.

Considering the efforts by some of our more systemically liberal districts to defund our police, I propose a better solution; we should consider defunding Congress, both Houses. To be fair, in defense of America’s Police Force, I would conservatively say that 90% of our Police Men and Women are decent people doing an infinitely difficult job and doing it well. 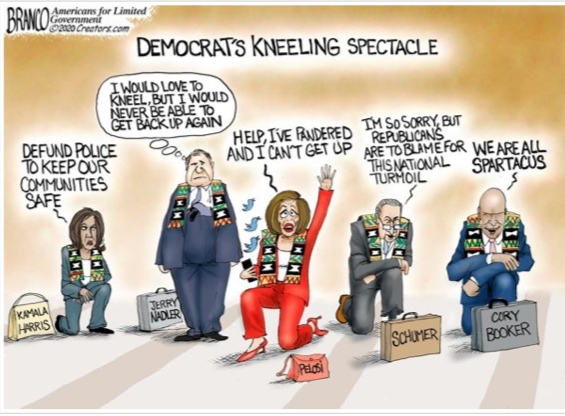 I further the argument that 90% of the members of Congress are NOT doing their job. Most members of Congress make no substantive contribution to either their individual districts or to the American people at large. The waste, avarice and greed of Congress ignores the greater needs of America and all of its people.

Congress is no longer a reasoned body of individuals representing their Districts and the greater good of America. They are like a stricken beast. Far too stupid to consider their own demise. They embrace controversy and avoid any real content at all turns. Their current behavior makes them unqualified to receive a salary. They should be defunded.

Concerning our current national dialogue, here is a consideration: When Black Americans are consistently killed by gun violence, such as in the cities of Chicago and Baltimore, where are the Black Lives Matter, also known as BLM, protests?  Ironically, in recent history, Baltimore is one of the cities that is seeking to defund the police. They attempt to defund what they need the most. The leaders in these referenced cities are illusionists in search of a vision.

The Left in America seem to have a problem focusing on more than one subject at a time. They are riding this present flame of anarchy until everything else burns around them. Considering Antifa and BLM, their point of view is the only reality in their limited perception.

I have to ask, what is Antifa, BLM, or any of us for that matter, doing to make our neighborhoods safer and better? What are we doing now that will be inspirational to future generations?

Additionally, are the Police responsible for Black on Black violence? We have to consider individual responsibility as part of this discussion. Drugs, gangs, fatherless families and a victim mentality seem to play a large part in our current acts of violence. Our divisions were readily apparent before George Floyd’s death. Now those divisions are the evening news.

Of course, it will be thrown at me that I am operating from a status of “White Privilege.” What a truly offensive term. Like the archaic, ante-bellum term that I never use, the “privilege” moniker rankles me equally.

The recent protests in  America have come to pass like a selfish wave of entitlement that rears it’s shouting, unattractive head. A head that shouts without any common sense attached to it.

As far as white privilege is concerned, I paid the dues for any accomplishment that I have realized or any material item that I own. Considering everything in history, liberal white America suffers more from white guilt than privilege.

America, like it or not folks, was founded on a rule of law. If we defund the Police, who keeps the rule of law? Do anarchists create security teams to patrol and possibly terrorize our neighborhoods?

On a related matter, let us go back and consider again our current Congressional Clown World. In deference, to the Black Lives Matter movement, Speaker Pelosi and other members of Congress put on poorly understood African tribal clothing. On June 8th, these costumed leaders took a knee in solidarity with the BLM movement. They kneeled for exactly eight minutes and 46 seconds to equal the amount of time Officer Chauvin took a knee to George Floyd’s neck. This is a tissue-thin image and a pandering attempt at solidarity.

Historically speaking, the clothing worn by the Democrats on June 8th has a tradition and meaning that was obviously lost or unknown to them. Specifically, Pelosi and Schumer and their group of “socially conscious” Democrats were wearing colorful scarves of Kente cloth. These scarves originally were worn by the Ashanti tribe. The Ashanti were an African tribe of slave owners and slave traders.  No excuse for this active delusion by these Democrat “leaders.” Yet, it does speak to the plantation paternalism of Democrat Party in their relationship with Black America.

Considering the perpetuation of past Jim Crow standards, by the Democrat Party, no wonder they are kneeling and are supporting the destruction of America’s previous history. I wrote about this extensively in the July 2019 PolitiChicks article, “The Politics of Race in America.”

Antifa, Black Lives Matter, and their related offshoots, are attempting to change history by destroying history.  Destroying a statue or removing a flag merely disguises history; It does not change it. As I write this, Seattle, Washington is in flames and Confederate statues have been beheaded and destroyed in Portsmouth, Virginia. How does this honor the memory of George Floyd?

The riots and the destruction or vandalism of historic statues and symbols are a misguided attempt to rewrite history. Historical negationism, also called denialism, is a distortion of our shared historical record.

Riots destroy property, ruin and diminish lives and are anarchy in action. Riots rarely, if ever, move the conversation forward. Consider what positive changes occurred in the wake of the previous Watts, Detroit, MLK or Rodney King Riots? None, we received destruction, death, advanced hatred and a victim mentality that merely panders to the problem. These are the same destructive points that occur with the current George Floyd riots America is facing.

We need an honest and frank conversation about race in America that should include citizens and police. What we don’t need are uninformed and ignorantly violent organizations, like Antifa and BLM, who perpetuate hate and anarchy. In addition, America does not need any citizen or politician that supports or funds such activities.

The chilling premise is that the Democrat Party wants to win in 2020, no matter what.  Even if that win means the burning of America. No matter the chants, signs or slogans, there is no order in disorder.

As a Christian in America, I feel that we are witnessing the advent of the new Pharisees. My fellow writer at PolitiChicks , Dr Fredric Eichelman, wrote the following:

Today our society is being faced with a new brand of Pharisee, people supposedly leaders in government and the media, society in general including education institutions and sadly even some churches.  Woe betide any one who is critical of violent protest, rioters, the BLM, Islam or who supports Christian values based upon the Bible.  We are expected to sit by as there are calls to defund the police and the demands that we follow the political correctness of the day.  We are to watch dumbly as in 1984 style history is being rewritten.

The Saints in Heaven are surely asking “Oh Lord how long will this continue?”  We should fear not as these are all signs of the end times. While it is true worst things may be ahead, our greatest weapon is prayer.  Our Lord Jesus Christ will only allow this from our Pharisees today so long. We as Christians are being tested and we can be sure, the end times are near. We should never doubt that God is with us and loves us.   We also need to keep this in mind as elections are set nationally for this year and for our state next year.

I agree with Dr. Eichelman. I also propose that when times are at their most dangerous, God Almighty is at his closest point to our shared humanity. But I close with words that John Lennon sang in the context of the song, Revolution:

But if you want money for people with minds that hate
All I can tell is brother, you have to wait.

In the midst of hate, I aspire towards love.

Why Do Democrats Hate America?