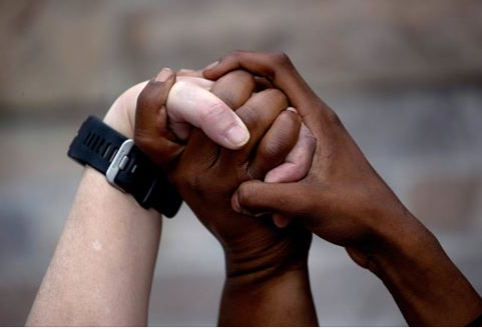 It has been my contention for quite some time that our society has left God and have embraced moral decay. It is evident in everyday life where we see the naked depravity paraded on the news and the cable networks as something that should be held up as honorable or admirable. Our society subjects our children to things on TV and culturally that are unacceptable. The things our culture in America seems to hold up as good and just would have made your grandparents blush. People believe that somehow by turning from God our society is far better but, as we have seen over the last century, the further away we have walked from God, the greater the distance we are from a morally just society.

While we can all agree that aspiring to a perfect realization of the core of Imago Dei is difficult in a fallen world, where practiced, Love and Respect abound. One wonders however that if God is no longer part of the conversation and we are no longer respecting one another rooted in Imago Dei, where does justice, honor and love come from? Short Answer – it does not exist. The issue with many people who do not have God at the center of their existence is, they cannot connect their existence with that of their fellow man. Respect and justice come from a deep faith in God which generates a deep love of our fellow man. Godly people do not foment hate and violence toward one another. Typically, Godly people seek to make each other better and build each other up, as we have seen recently in these riots however, there as been nothing but destruction, devastation and violence.

The death of George Floyd was nothing short of a disaster. No one with any Godly sensibilities would argue otherwise. Watching the video of the Officer, who will not be named here because his depravity speaks for him now, with his knee on George Floyds neck made me physically ill. There is no excuse for that type of policing in any of our cities in America. I join everyone in condemning police officers who use their badge as a shield for depraved actions. George Floyd should not have died with the knee of a police officer on his neck. The officer will be brought to justice for his crime against his fellow man, no doubt.

Protests coming as an outgrowth of this horrendous crime are to be expected, are warranted, and deserve the space to voice their disgust. When we see people turn from protesting to outright violence, looting, arson, and physical force against others, we must begin to call it out and demand it end. No one who is peacefully protesting the unjust end of another man’s life should be prevented from utilizing their God-given, Constitutionally protected right to speak out against injustice. When violence replaces peace, law and order must be instituted and as such, the backlash against these rioting youth will be swift and painful. I pray they come to their senses and embrace non-violence.

This evil culture that seeks to remove God from the center of life has come to the fore and unfortunately, a generation of young Americans have fallen prey to that culture. Modern American culture has sold us jealousy, envy, greed, and lust as the ideal. We are now seeing the result of Hollywood, Left-Wing governance, and Progressive ideology that has for so long been in charge of the dialogue. Their desire for a radical reformation of this nation was always going to pan out in violence and destruction, George Floyd’s death was just the tragedy they needed to unleash their hate.

George Floyd’s death should never have been usurped for the purpose of violence, rioting, and looting. George Floyd’s death was an opportunity for all Americans to unite and come together peacefully to say, “No more.” No one who looks upon that video of George Floyds death comes away from it saying anything other than, “this is a tragedy and cannot be allowed anymore.” #JusticeForGeorge could have sparked the changes that all Americans long for, a post-racial society. Instead, we have evil Godless people destroying great cities in America and bootstrapping issues completely irrelevant to the issue at core which was justice for a man slain by a police officer who used excessive and unnecessary force.

I pray that the violence in our great American cities ends. I pray that our nation returns to the core of faith in our Creator who endowed us with certain inalienable rights such as life, liberty  and the pursuit of happiness. I pray that we are able to recognize our common humanity and are able to come together strongly as a nation. I pray that we embrace Imago Dei.

Louis Adimando is a Husband, Father, and Lawyer. His passion for politics started early in life when he assisted his father passing out campaign literature as a child during the '92 election. While libertarian leaning by nature, all he's asks for is that people engage in civil discourse about the topic at large, not attack people who disagree. His motto can be summed up as, "Hate no one, engage with everyone." Email: [email protected]om

Greenfield: Another Night in Lootopia

The Great And Terrible Wizards of Lockdown