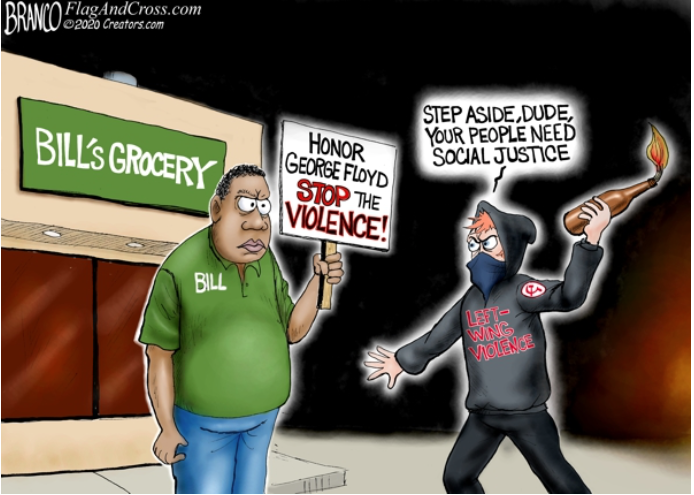 Black Lives Matter is the flavor du jour among journalists and Hollywood celebrities recently. It’s not hard to understand. As various elites work to signal their virtuousness, BLM provides ample opportunity by demanding others bend the knee to them.

BLM has also taken the lead in a variety of demonstrations — both peaceful and not. They’re central to the 6 block takeover of downtown Seattle.

It was BLM leaders who popularized the ideas — and the chants — associated with defunding the police.

In the immortal words of Deep Throat (a la the Nixon era), “let’s follow the money”. If you click on the donate button at the BLM web site, you end up donating through a portal called “ActBlue.” ActBlue was founded by leftist activists who wanted to help Democrats raise money. Since their founding in 2004, they’ve raised approximately $1.6 billion for Democratic candidates.  Bernie Sanders used them. So does Joe Biden.

ActBlue raised over $19 million on a single day immediately following the killing of George Floyd.  They broke that record on June 1st by raising $20 million. In the last month, they’ve raised more than $1.5 million from 20,000 donors for their “charity” to bail out rioters and vandals.

As mentioned in an earlier blog. Black Lives Matter seems to believe the black lives that really matter are only those taken by police.

They’ve never made a peep about the 300,000 plus black babies killed by abortion each year. They’ve posted nary a picket outside any Planned Parenthood abortion clinic. To BLM, the lives of black babies clearly don’t matter.

Then there’s the fact that more than 7,000 African Americans were killed last year in homicides. Since the great majority of those homicides were committed by other blacks, though, we hear nothing from BLM. Apparently those 7,000 plus black lives don’t matter either.

It’s not uncommon to get word from Chicago that another 50 young black men were shot over the weekend in that city alone, with 20 dying as a result. Why aren’t the leaders of BLM descending on Chicago to demand something be done, and hold the local politicians – all Democrats – accountable? Or is that just another group of black lives that don’t matter to BLM?

As part of their Defund the Police initiative, BLM is demanding that a large share of law enforcement’s funding be given instead to organizations that serve black communities. OK. Every person with a brain wants better schools for blacks – except that is teacher’s unions, and, their progressive Democrat boot lickers. Teacher’s unions gave millions to Democrat candidates in 2018. They’re doubling down this year. The Democrat Party is a near wholly owned subsidiary of unions – especially public employee and teacher unions.

You used to find Democrats who supported charter schools and voucher programs. Even Barack Obama once claimed to do so. Not so much anymore. Unions won’t allow it. As a result, students trapped in failing inner city school districts are left behind. Democrats won’t help. They can’t.

BLM, and the mostly white progressives who support them, are largely the product of decades of public school indoctrination controlled and directed by teacher’s unions – the National Education Association and the American Federation of Teachers. They’ve rewritten American history to teach our nation was founded on and is unalterably tainted by slavery and racism. They’ve demanded less math, less English, very little civics, and the abolition of economics. Instead that want more sex education and Mexican history.

Blacks who attend charter schools by contrast, are far more likely to graduate, more likely to go to college, and more likely to succeed in life. The same for those fortunate enough to attend parochial and private schools. Democrats say it has less to do with the schools themselves and more to do with parental involvement. Well yea, that’s one reason when a few seats open at a charter school, hundreds of families show up to claim them.

Public schools, meanwhile, have failed entire generations of poor inner city students. And we can’t do anything about it. Unions won’t allow bad teachers to be fired, and Democrat politicians who control most of the cities in America won’t stand up to the unions.

All that money spent on lousy schools could be used to give families more education choices and finally break the grip of poverty on the next generation. Where’s BLM? They’re burning down police headquarters because police are very often society’s first line of defense against adults who were trapped as students in failed schools. Does that make sense?

Black Lives Matter has a real problem. If they want to help black kids, break the cycle of poverty, and reduce the need for police; they can’t be a lackey organization for Democrats.

Democrat politicians are happy to throw tax dollars around so long as those dollars don’t gore any sacred ox, like unions. Police are a different matter.  They tend not to support Democrats so Democrats have nothing to lose if they’re defunded.

It took Donald Trump to do all those things. The Covid has set back most of those gains, but it hasn’t erased them. If Donald Trump is given a fair chance, those gains and more will return.

We can only hope Trump will work as hard to establish more charter schools and voucher programs as he did to begin closing the economic gap. But that will take standing up to teacher’s unions. BLM knows Democrats won’t do it. They’d be a lot further ahead helping Donald Trump who will.

Greenfield: The Jonestowning of America

Here Are the Heroes Whose Statues Black Lives Matters Has Attacked