The statue of Raoul Wallenberg, the Swedish diplomat who saved thousands of Jews during the Holocaust, stands at the corner of Fairfax and Beverly in Los Angeles. When the racist mobs swept through the area, looting Jewish stores and defacing synagogues with “BLM” and “Free Palestine” graffiti, the statue of a man who risked his life to resist fascism and bigotry was one of their targets.

The racists and leftists vandalizing statues across the world claim that they’re fighting hate, but their targets have often been the men and women who courageously stood up to racism and hatred.

When the statue of Churchill was vandalized in London, the thugs who did it went after the one man who had done the most to wake up the world to the threat of fascism. In Philadelphia, the thugs scrawled “murderer” and “colonizer” on a statue of Philadelphia abolitionist Matthias Baldwin and in Boston, they vandalized the ‘Glory’ monument of the African-American 54th Regiment.

In Washington D.C., the Lincoln Memorial and the National WW2 Memorial were both defaced. 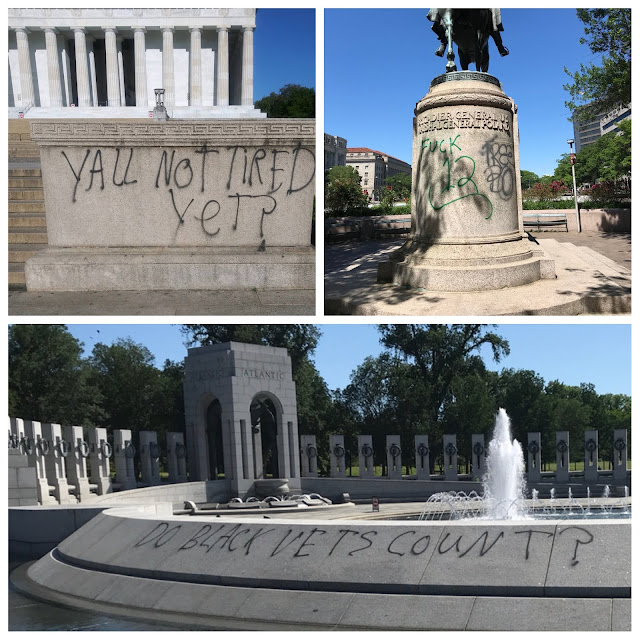 While the media has upheld the racist narrative justifying the Taliban campaign against America by focusing on confederate memorials, the vandalism has been extensive, targeting both sides in the Civil War, and spilling over to vandalize statues that have absolutely no relevance to contemporary politics.

In Louisville, the statue of Louis XVI lost a hand and then was graffitied. Despite the French monarch having absolutely nothing to do with Floyd’s death, the statue was spray painted with “BLM”, “We Will Win”, and “George Floyde”. If the ghost of the executed king had been hanging around Louisville, he would have been outraged and confused at being blamed for a dead man in Minneapolis.

But nobody ever accused Black Lives Matter of knowing any history beyond the 1619 Project.

In Scotland, a statue of Robert the Bruce was vandalized with the epithets “Racist King”, “BLM”, and “Robert was a racist bring down the statue”. Robert lived in the 13th century. He no doubt was very racist toward the Saxons, but It is unlikely that he had ever met a black person in Medieval Scotland.

Even more randomly, the ‘Waiting’ Statue in Harrisburg of a man reading a newspaper while waiting for a bus was covered in the red paint that the racist and leftist mobs have been using on statues. Apart from being a depiction of a fictional white man, it’s not at all clear what the statue did to deserve that.

Much like Nile Kinnick, the 1939 Heisman Trophy winner, who died in WW2, but was still vandalized.

Even minority statues didn’t get a pass.

A memorial to three lynched black men was defaced in Duluth, Minnesota, to the outrage of the NAACP.

Statues of Gandhi were vandalized in New York City, Washington D.C., and London, in Bristol, England, a statue of a Jamaican playwright was covered in bleach, and in El Paso, Texas, a statue of Don Juan de Onate, a Spanish conquistador, was defaced with the message, “Your god is not my god.”

The El Paso vandalism was one of a number of defacements that appeared to be motivated by religious bigotry which led to the targeting of primarily Catholic churches and Orthodox Jewish synagogues.

That included at least one statue.

In Wasco, California, St. John the Evangelist church, a mostly Latino congregation, announced on Facebook that, “Sadly somebody destroyed the statue of Sacred Heart last night.”

The statue had been beheaded and had its arms chopped off.

The BLM attacks on the statues were not about fighting hate, but spreading it, defacing and defiling the values and memories that people hold dear in order to force them to kneel to its racial supremacism.

In Birmingham, Alabama, the racist thugs didn’t just go after confederate memorials, but the WW1 Doughboy memorial to the Birmingham boys who had gone off to fight in the fields of France and never returned which had been dedicated by the city’s Greek-American community. Another statue commemorating the American soldiers who had fought in the Spanish-American War was also defaced.

A statue honoring Thomas Jefferson was set on fire as the radical mob hooted and held up smartphones, but while a flame burned at the base, the great man appeared to be untouched.

In Missoula, Montana, a statue of a WW1 Doughboy was vandalized. In Pittsburgh, a WW1 memorial was defaced with a hammer and sickle to commemorate the deaths of Communist terrorists. The choice of message strongly suggests that this particular memorial vandalism had been carried out by Antifa.

Griffin’s Veteran Memorial Park monuments in Atlanta were vandalized with “BLM” and “People over Property” slogans, and the Colorado Soldiers Monument was defaced in Denver.

Christopher Columbus, the bold explorer who paved the way for the settlement of the New World, was a particular target with statues of the great man vandalized in cities across the United States.

In Houston, a Columbus statue donated by the Federation of Italian-American Organizations of Greater Houston to commemorate the 500th anniversary of the discovery of America had a hand chopped off, a noose placed around its neck, and the message, “Rip the head from your oppressor” taped to it.

In Miami, statues of Columbus and Ponce De Leon were defaced with “BLM”, “George Floyd” and the hammer and sickle. Columbus statues were beheaded in Boston, spray painted in Pittsburgh, thrown into a lake in Richmond, and torn down in St. Paul. Camden and Wilmington, among other Democrat cities, took down statues of the great explorer on their own. Boston is likely to follow suit.

Wilmington also took down a statue of Caesar Rodney, one of the Founding Fathers and a signer of the Declaration of Independence. A statue of General Philip Schuyler, a member of the Continental Congress, the father-in-law of Alexander Hamilton, was removed by Albany’s Democrat mayor.

The monument to General Kosciuszko, a Polish national hero who had served as a colonel in the Continental Army during the Revolutionary War, was vandalized with BLM graffiti in Washington D.C.

The statue of General Casimir Pulaski, who had fought for American independence, was also defaced.

In Boston, a statue of Abigail Adams, the wife of John Adams, was vandalized. Abigail had been a fervent opponent of slavery.

But it’s not just the American heroes of the past whom the un-American radicals and racists hate.

In Dover, Delaware, a memorial to fallen law enforcement officers was viciously vandalized. The statue of an officer kneeling before the list of the names of the fallen was attacked with an axe, and the state flags flying over their names were soaked in urine.

Memorials to fallen police officers were vandalized in Richmond, Virginia Beach, and Fort Worth.

“F__ the Police” was spray-painted on the California Peace Officers’ Memorial in Sacramento.

A memorial to Officer Robert Kozminski in Grand Rapids, Michigan who was killed while responding to a domestic dispute was defaced with the word, “Pig”. And in Pittsburgh, a police memorial was defiled. The memorial is commemorated with the poem, “He answered the call, of himself he gave all, and a part of America died.”

The soul of a nation lies with its heroes. The radicals and racists tearing down our statues are out to destroy that soul. They want our heroes to be Karl Marx and Angela Davis, they want terrorists, totalitarians and criminals celebrated, and heroes, explorers, founders, officers and soldiers condemned.

They aren’t just coming for the “controversial” statues as the media likes to tell us.

They are coming for all the statues, for our entire history, for every great man and woman who sacrificed, strove, and struggled to move the course of human history forward by even one inch.

They are coming for America. And they intend to destroy it, one statue and one city after another.

When the history of this period is written, we will learn whether we had any heroes in our time.

If You Really Care About Black Lives, Don't Support the Democrat Party

Dr. Fred Eichelman: The Politics of Public Education Over the Decades