The NFL is testing face masks, not for the fans in the stands, but for the players. Is there a face mask in the world that will stop virus particles from being inhaled when the players are inches apart and slamming into each other at high speeds? Probably not. But masks have become a cultural symbol.

That’s why masks are being deployed in environments where they’re ridiculous and useless.

A strip club in Wyoming reopened with mandatory masks. At restaurants in Atlanta, waiters wear face masks. Both are equally silly. Non-medical masks might stop large droplets, but won’t stop small ones. People interacting at close range will be producing small droplets that a cloth mask won’t stop. When everyone is inches away from each other, talking and exchanging money, the masks are just a fetish.

What a mask says is more important than what it does. That’s why it’s the symbol of the rioters who flock in hundreds and thousands, screaming and yelling, while wearing masks to cover their faces. It’s why Governor Whitmer and Governor Murphy violated her own executive orders, marching closely with Black Lives Matter racists while wearing masks to show two types of political virtue. 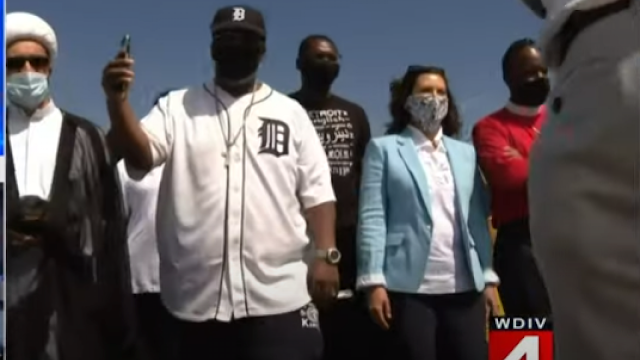 Governor Andrew Cuomo claimed that masks are a symbol of “respect”. He’s partly right. Masks are a symbol, but not of respect. Cuomo, whose policies killed thousands of nursing home residents, understands that better than any of the gullible yuppie emigrants to New York who made him a hero.

Against an intangible virus and the fear it spreads, masks are a protective fetish and a badge of moral superiority. To wear a mask is to say that you are a responsible person who obeys public officials.

The mask is a badge of citizenship in a lockdown society. And is instinctively rejected by opponents of it.

Clothing retailers from the Gap to Nordstrom have jumped on the mask bandwagon. There is already a ‘Mask of the Month’ club that will send you a customized mask and a Baltimore gay leather bar is selling masks with shirtless firemen on them. Major fashion designers offer premium priced masks and Disney, which never misses a licensing opportunity, will sell you Mickey Mouse masks to stave off the virus.

Why is there such a proliferation of individualistic mask designs, many of which are actually less effective than the baseline blue surgical mask? Because the masks are part of the wearer’s identity.

Advertising for these masks doesn’t delve into the medical effectiveness of their construction.

A report from the National Academies of Sciences, Engineering, and Medicine’s Standing Committee on Emerging Infectious Diseases found a “wide variation in filtration efficiency” among different types of fabrics. It also noted that, “a mask made from a four-layer woven handkerchief fabric, of a sort that might be found in many homes, had 0.7% filtration efficiency for 0.3 micron size particles.”

Customized brand masks, like those sold by Disney, are usually polyester and especially bad.

“Don’t use a synthetic or a polyester because they’ve looked at the virus’s ability to survive on surfaces, and spandex is the worst,” Dr. Daniel Griffin, a Columbia U expert on infectious diseases had warned.

The customized mask industry is selling people the illusion of protection while actually endangering them. But the mask isn’t a medical solution. Like many politically correct products, it signals the wearer’s virtue by showing that he or she cares about other people. And is on board with current trends.

“We care a lot about you people cause we’re out to save the world,” Faith No More sang. “It’s a dirty job but someone’s gotta do it.”

Social justice claims to care and to look down at those who don’t. Caring about the coronavirus is only the latest incarnation of caring about acid rain, the whales, poverty, racism, war and all the phobias. Good people care about socially relevant crises and show that they care by wearing something.

These days that’s a mask.

It’s a dirty piece of polyester choked with bacteria, but somebody’s gotta wear it to save the world.

Buying a mask that donates a percentage of sales to a charity, and then wearing this new style in public is the new t-shirt or bumper sticker. It spreads awareness and shames those who are still ‘unaware’.

Wearing a mask was initially discouraged. The public was told that masks were reserved for health care professionals. And then it was not only encouraged, but mandated. Now every urban hipster cheering vicariously for our ‘health care heroes’ can wear a mask and sneer at those who just don’t care.

The only problem is that it’s hard to sneer while wearing a mask. That’s what the customization is for.

Fetish objects of social responsibility cause more problems than the ones they claim to be solving.

Electric cars are worse for the environment than regular cars. Reusable shopping bags spread disease. And it’s not unusual to see mask wearers clustering together outside artisanal coffee shops and hip eateries, chattering in the certainty that the magic of their masked moral superiority will protect them.

Like celebrities announcing that they’re saving the planet by wearing the same tuxedo or dress to the different award shows in the different cities and on the different continents that they jet between, the mask is a meaningless fetish object that provides social approbation for a multitude of riskier behaviors.

Masked NFL players from opposing teams are not going to be protected from spreading the virus to each other by wearing masks under their helmets. Wearing masks doesn’t make a restaurant or strip club safe. But wearing masks while taking everything else off is what passes for progressive virtue.

The point is not to protect anyone, but to care.

Governor Cuomo, who lectures non-mask wearers on respect, cares. Not enough to protect the 5% of New York’s nursing home population who died of the coronavirus when he ordered these facilities to accept coronavirus patients. But he cares enough to constantly talk about how much he cares.

And that, like a stripper in a mask, is what progressive virtue looks like. It’s naked, but covered in a false face. The emperor wears no clothes, except for the façade of caring concealing his true face.

“Virtue has a veil, vice a mask,” Victor Hugo once wrote.

Wearing a mask is about appearing to be a better person without being a better person. That is what the fetishes of social responsibility, whether it’s farm-to-table food or flying on carbon credits, are about.

Social responsibility has always been about putting on masks of political correctness, of environmental concern, or benevolence toward the lower classes that conceal the real face of the leftist. Now the masks have stopped being a metaphor. And the metaphor is something you buy and wear outside.

The masks may be real, but the virtues of social responsibility they represent are just as hollow.

Being a good person is hard work, but anyone can put on a mask.

Katie Hopkins: London's Hypocrisy: Locked Down While Protestors Gather in the Thousands