Like the Maytag repairman, things are so quiet that the FBI doesn’t have much to do these days.

That’s why fifteen FBI Special Agents were urgently dispatched to the Talladega Superspeedway to conduct an investigation of the pull rope in Garage Number 4. 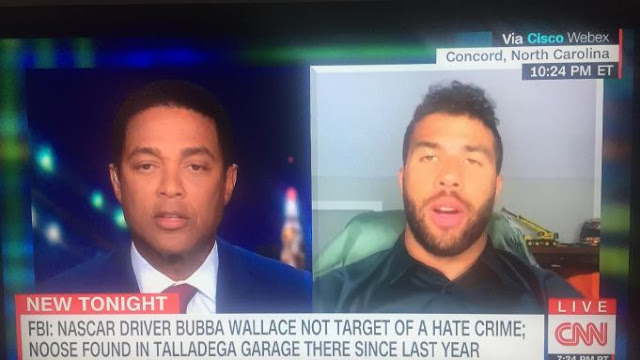 After “a thorough review of the facts and evidence surrounding this event”, the 15 FBI Special Agents determined that the rope was not a noose and had been there since October 2019.

To paraphrase, Churchill, never was so little owed to so many for a reason so stupid it’s beyond belief.

Those 15 Special Agents might have been put to better use investigating the Birmingham riots at the beginning of the month when mobs tore down a statue of Charles Linn, a Finnish immigrant and prominent local businessman, who had also served as a Confederate sea captain, attacked the Confederate Soldiers and Sailors monument in Linn Park, and vandalized the Hugo L. Black United States Courthouse and Robert S. Vance Federal Building. Black, aside from being FDR’s progressive Supreme Court justice, was also a Klansman, but the mobs don’t know any history that isn’t in Howard Zinn.

The mob also smashed windows, set fires, and burned an American flag in one of those usual peaceful protests turned violent that has racked up over $100 million in insurance claims nationwide.

Not to mention hundreds of law enforcement officers wounded in battles with the leftist thugs.

U.S. Attorney Jay E. Town, and FBI Special Agent in Charge Johnnie Sharp, Jr, who were also in charge of the Great Pull Rope Robbery, issued a statement warning, “we have zero tolerance for those who incite, organize, encourage, or engage in civil unrest, violence, and destructive behavior anywhere in the Northern District of Alabama. And make no mistake, we will bring those individuals to justice who do.”

That was on June 1st.

It would be good to know just how many FBI Special Agents have been assigned to that one.

But fake noose is a serious problem that’s popping up around the country.

There was shock and outrage in Oakland, California when five pull ropes were discovered around Lake Merritt. It was especially shocking because black people are the single largest group in Oakland.

The claim originally came from a Twitter account with the hashtags #Noose, #EndRacism, #MyLifeMatters, #BlackLivesMatter, #BLM, and #NoJusticeNoPeace, when it only needed one hashtag.

Local black residents had actually put them up as exercise equipment.

“Out of the dozen and hundreds and thousands of people that walked by, no one has thought that it looked anywhere close to a noose. Folks have used it for exercise. It was really a fun addition to the park that we tried to create,” Victor Sengbe said.

A hate crime investigation was opened anyway and more patrols were dispatched to Lake Merritt to watch out for pull ropes.

“Intentions do not matter. We will not tolerate symbols of hate in our city. The nooses found at Lake Merritt will be investigated as hate crimes,” Mayor Libby Schaaf ranted at a press conference.

“We have to start with the assumption that these are hate crimes,” the white Democrat warned the local black resident. “We cannot take these actions lightly. These symbols are symbols of racial violence, and it is incumbent on all of us to have that sensitivity; to have that knowledge.”

At this rate, Victor may end up being the first black man charged with being a member of the KKK.

Over in New York City, a known hangout of the Klan, in the Bronx borough, which is about a third African-American and half Latino, more nooses were discovered in Van Cortland Park.

“I looked up and saw a noose hanging,” Alexandra Haridopolos squawked. “It felt like it was meant to be seen. The other two were right by a walkway, in very good lighting.”

Haridopolos is, predictably, a blond white woman, who writes up things like, “Using Postcolonial Theory to Create Writing Opportunities in ESL Classrooms” and “Gender F Extravaganza challenges stale gender roles”. But while Haridopolos knows a lot about postcolonial theory, she doesn’t know her nooses.

The NYPD determined that the nooses were actually nylon strings from a pinata. There had recently been a party in the area. And the Bronx is a majority Latino area. But Haridopolos doesn’t buy the NYPD’s explanation, complaining that the police refused to file a complaint about the pinata noose.

“It’s clear what this is,” she fumed. “Someone knew what they were doing.”

Jamaal Bowman, a leftist congressional candidate backed by Rep. Alexandria Ocasio Cortez, appeared at a rally and declared, “We will not be intimidated.”

The rally was organized by Jennifer Scarlott, an elderly white woman who founded Bronx Climate Justice North, which has 98 members, who complained that the NYPD hadn’t properly investigated the pinata.

Local Democrats released a statement declaring that, “the location where the rope was found is a common gathering site for family parties, and we cannot allow it to be taken over by fear and racism.”

Too late for that.

The noose truthers won’t give up until the FBI dispatches 15 Special Agents to track down the little girl that pinata belonged to and makes her confess her privilege while being yelled at by Jennifer Scarlott.

Noose fever continued in New York City’s Harlem where one of the many Klansmen who can be found wearing hoods while striding down nearby Malcolm X Boulevard, apparently ducked into Marcus Garvey Park to plant yet another noose. Marcus Garvey, the original black nationalist, was fond of saying things like, “between the Klu Klux Klan and the NAACP group, give me the Klan” and “hats off to Hitler the German Nazi.” But, even so, the Klan isn’t known to hang out in Marcus Garvey Park.

The panic in Garvey Park was once again sparked by someone on social media who decided a construction rope was really a noose.

Governor Cuomo quickly got on the case, sending the New York State Police to help out.

“I am disgusted by the recent discovery of a noose, the epitome of hatred and an evil icon of our nation’s racist past in Harlem’s Marcus Garvey Park,” Cuomo, whose policies are responsible for the deaths of hundreds of black senior citizens in nursing homes in the state, declared.

The NYPD Hate Crime Task Force “thoroughly” investigated the incident and determined that the rope “was left over from a construction scaffold that was removed in the fall. The rope was used to hoist construction materials.”

And then got back to investigating anti-Asian and anti-Semitic assaults by mostly black suspects.

But the noose truthers weren’t done yet. Like their fellow 9/11 truthers, they began analyzing photos to determine the exact nature of the rope and its topography, while claiming that there was a cover-up.

Fake noose is a nationwide problem.

In San Francisco, a noose found in a park turned out to be a child’s swing. But the noose truthers went on insisting that it must be a noose.

“It seemed intentional,” the crank who started the problem complained.

In Oklahoma City, a swing set that had been set up by a Latino man for his grandson was misidentified as a noose. “That’s for the great grandkid. And whenever he doesn’t use it, I just took the swing set off because the birds sit there and get the swing set dirty. That’s why it’s hanging when the ropes are by there themselves,” he explained.

Practice gear hanging in a New Jersey fire station was misidentified as a noose and havoc ensued.

“I am appalled by the situation, and hopefully this is an isolated incident,” Mayor Bert Steinmann raved. “I don’t know what to say. Words escape me here. It should have never been there in the first place.”

Back in Birmingham, yet more nooses turned up in a city park. And these were actual nooses.

The police investigated and found that they had been hung up for Juneteenth as part of an art project protesting George Floyd’s death.

Finally, the owner of Dave’s Tropical Sno in Pittsburg, Kansas got in trouble because he was selling a watermelon, grape, and cotton candy concoction called Burning Noose.

The black man who came up with the flavor has apologized to the white leftists who were offended.

“I really, truly, want to apologize because I meant no harm and I did not mean for any of this to happen,” Keenan Carter said.

Perhaps Keenan’s apology to white leftists for the historical wrongs done to his people will appease them.

Kenneth R. Timmerman: Antifa – Coming Soon to a Neighborhood Near You