If Minneapolis City Council President Lisa Bender didn’t exist, Portlandia would have had to invent her.

After a degree from UC Berkeley, Bender worked for a New York City bike lobby, then did a stint in San Francisco, before she went back to Minneapolis to work for Minnesota’s DOT on bike lanes while running the Minneapolis Bicycle Coalition whose burning passion was putting bike lanes everywhere.

Militant bike activists are the dumbest and most loathed figures in urban civics. No group of people is as entitled, obnoxious, or clueless as a bunch of white hipsters in lycra shorts out to convince city officials that giving them more bike lanes will end wars, eliminate racism, and save the planet. There was only one possible career pathway for Bender in Minneapolis. Urban planning through politics as a DFLer.

Once in office, Bender began transforming entire streets into bike lanes. The plan was to have 60% of the residents of Minneapolis using bikes, walking, or taking the bus by 2030. Nobody bothered drawing up a budget for how much this plan would cost because that would have just rained on the parade.

Or rather snowed on it because Minneapolis gets an average of 100 days of snow. 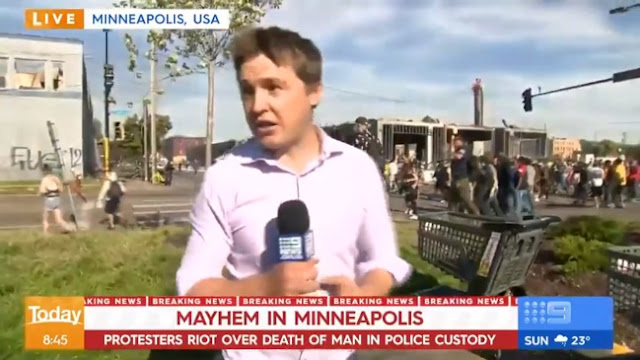 Last year, Minneapolis bike advocates were whining because the police had been ordering them to stay out of the snow. One complained that he was angry that the cops might have terrified “my fellow cyclists and pedestrians who are less privileged than myself… who may have been much more frightened in these sort of interactions than my cismale, white, straight-presenting self.”

The cismale rider was typical of Lisa Bender’s base of upscale hipsters renting condos in the ‘Wedge’.

Meanwhile Lisa Bender was being ticketed for not shoveling snow off her own sidewalk while telling everyone else to do it. In predictable fashion, she blamed the resulting scandal on sexism.

Despite Bender’s ambitions, the bike lanes were largely going unused. And, on top of that, the Minneapolis Bicycle Coalition, which had changed its name to Our Streets, opposed traffic enforcement because it was racist. And how do you keep cars out of bike lanes without traffic regulations?

But Lisa Bender and Mayor Jacob Frey, the student government that have become the laughingstocks of a nation and the death of a city, had a bigger vision for Minneapolis. They wanted it to be more like New York City with high urban density, lots of mixed-used buildings with families living on top of businesses, and people living in small cubes and pods, while biking to their favorite artisanal coffee shops.

Minneapolis still isn’t a college campus, but it has the first student council to run a major city. Besides Bender, there’s Keith Ellison’s son, who describes himself as a “visual artist, storyteller, and political organizer”, Phillipe Cunningham, whose bio is, “progressive, Black, queer & trans”, Lisa Goodman, “activist and dog mom”, and assorted other characters who ought to be debating at the student center.

Instead they’re determining the fate of a city and a country without having a clue about anything.

But it was the voters of Minneapolis who voted for DFL Democrats and let them trash their city because promised them a glorious future of bike lanes, diversity, and saving the planet.

Minneapolis had lots of older homes. Preservationists wanted them kept and remodeled. But the student council government running the city wanted them destroyed and replaced with glass boxes. Since there were still too many homes, Bender championed an end to single-family zoning and got her way. Now there was nothing standing in the way of her vision of turning Minneapolis into a campus.

Frey, Bender, and the rest of the aging college gang, were selling Minneapolis the same bill of goods that Buttigieg had sold South Bend, and that numerous other young and eager student council members had sold other declining cities, that with more bikes, glass boxes, and green energy, they would attract dot coms that would build their own versions of Facebook and Amazon in their cities generating billions.

If Bender was a character out of Portlandia, her enablers had sprung straight from South Park.

Nobody involved in this knew how anything worked. They just knew that they wanted young people with degrees from big bicoastal colleges to move back and turn Minneapolis into the future. Also, they wanted diversity, environmentalism, and lots of biking in a city where it snows 100 days of the year.

While Frey and Bender were trying to turn Minneapolis into a millennial sandbox, there were real problems closer to home. Bender’s own neighborhood, Lowry Hill East or the ‘Wedge’, was a white hipster enclave with rising crime. The regular muggings were perpetrated in the ‘Wedge’ by people from outside the neighborhood. The Lowry Hill East Neighborhood Association (LHENA) had coped with the problem in the past by getting off-duty MPD cops to patrol the neighborhood and fight crime.

This year, there was a spike in robberies. The rise in crime hit the Wedge, which was at the center of Bender’s vision of an influx of hipsters renting condos, while also attracting muggers and thieves. Once the riots began, things only got worse. Local communities turned vigilante and began blocking off streets while volunteers patrolled retail areas to deter looters.

Even before the Minneapolis student council government decided to defund the police, law enforcement had already been replaced, not because of Bender’s legislation, but because the city’s services had broken down, and it was not replaced by something new, but something very old.

In the aftermath, Bender is championing defunding the police. Just like all her other plans, she has no idea how to do it, but it’s a trendy lefty cause and without those, she would be working at Starbucks.

On social media and CNN, Bender has explained that the only way defunding the police will work is if people check their privilege and refuse to call the police when they’re being robbed or mugged. Some of the condo residents biking in the snow might go along with that, but most people aren’t going to do it. If there are no police, they will set up neighborhood watches and eventually those will be armed.

Minneapolis City Council members have claimed that policing is rooted in white supremacy. That’s the kind of dumb thing a freshman student would say in a social justice class. Law enforcement is how local governments provide security in a lawful manner. Remove the law enforcement and you also take away the law and the security. But there are older laws than those of Minneapolis and the United States.

Defund the police and some people will lose their property to looters while others will fight them. When there is no law enforcement, the only law that will matter is the law of force.

Frey, Bender, and their student council politics are ushering in Minneapolis’ Lord of the Flies. But that’s what happens when you put a student government and its campus politics in charge of a major city.

The good news is that Minneapolis is finally becoming more like New York City. And New York City is becoming more like Minneapolis. Civilization is collapsing in both of those cities in the same way. There will be glass box condos, feminist poetry readings in hipster bars, and lots of bike lanes everywhere. And when you need help, you don’t call the police, you call your neighbors or take matters into your own hands. When you defund the police, the people who lose out are the isolated and the weak. And we all lose because when the only law is that of force then civilization gives way to savagery.

Bike lanes are useless when you can’t leave the house and glass boxes are easy to break into.

Lisa Bender and her colleagues, who have more identity politics credentials than competence, promised to transform Minneapolis into a futuristic utopia of glass boxes, mass transit, bike lanes, environmentalism and diversity. Now, Minneapolis doesn’t need those things, if it ever needed them.

All Minneapolis needs is a way to stop people from killing and robbing each other in its streets.

It’s a good thing then that Bender and the rest of the council are defunding the police.

This Just in From #AntifaStan (aka CHAZ): Border Walls Work