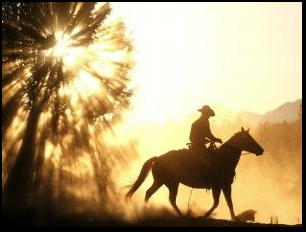 I was just a kid of fifteen when I saw this man come riding into town out of the sunrise. It was on a Sunday morning and he was mounted on a tall write horse that had red eyes like they was on fire. They were not evil eyes but the horse’s eyes seemed to burn with intensity. The man wore a white hat and was dressed in white with a black bandana. Folks here in Pennyworth, Texas wouldn’t think this too unusual as after all this was 2030 and with gas shortages horses were number one again for transportation around here..

The stranger stopped by our local and only church dismounted and I noted that the stranger had strapped at his hips what looked like two colt navy guns, 38 caliber. But bigger than I had ever seen. So was the man who stood well over six feet tall with the broadest shoulders I had ever seen.

The stranger looked at me and I felt a chill as he asked in a low steely voice. “You got a law office here?”

“You kidding mister. There ain’t been no law here in Pennyworth for a while. Unless you count Pastor Tom whose in that church building right now. He is like the mayor as no one wants that job anymore. By the way, who are you?”

The stranger had cool grey eyes that seemed to look through me and he replied “Folks just call me Michael. I assume you were going to church so let me join you as I have something to say.” Actually I was not a church goer then, but I wasn’t about to argue. I was kind of scared.

I went before the stranger called Michael and opened the church doors. Ours was a small church then, could not have been more than twenty members. A hymn had just finished and the congregation turned startled to look at the stranger. Pastor Tom, a tall man himself was behind the pulpit and demanded, “What do you want here sir. Guns are not allowed in here. The rest of the town may be full of gun slingers sleeping off Saturday night, but we do not need your kind here.”

“Ah but you do” the stranger named Michael replied. “You need me because police and sheriffs were done away with. I am here for real justice.”

With that Michael bounded to the front, leaped to the pulpit and turned to the congregation. “Forgive me Pastor Tom. I just need to say a few words.” Then in a distinct ringing voice addressed the room.

“I don’t mean to alarm you, but the time of final rapture, tribulation and judgement is within a few hours. I am here and in countless town and city churches to give warning that you have one last chance for redemption. I appear to you this way as some of you older folks may recall similar figures from your motion picture and television screens. For here and now that is better for your minds to handle than a blazing chariot. Your state of Texas, your nation, your world is about to end. It has been corrupt for too long and I am here appealing to your entertainment educated minds to know this is the final gunfight.”

Pastor Tom was clearly shaken, more than I had ever seen him. “What are you expecting us to do?”

Michael,s voice took a new pitch, I want you to remember that Christians should be taking the lead here and everywhere. Christians need to band together in repentance and prayer and

denounce the injustices and hypocrisies that have so crippled your existence. I want every person in this town to gather on Duke Street for the final showdown. I want you in this church to go out and spread the word and get everyone there. I will be in the center of town, high noon for the final confrontation.

I could tell the authority in Michael’s voice seemed to waken every person and they hurried out to tell friends and neighbors and as well as those not so friendly and neighborly that they had a calling out. I was the last to leave the church building as Michael led me out to his horse. He asked me to hitch the horse on Duke Street and promised to be along shortly.

Noon was soon coming and it was a Texas scorcher. People were grumbling about bring hustled out of their homes and the population gathered in the street. Separate, but near them were a group of un shaven unhappy looking outsiders who were used to coming to town to get drunk and shoot things up. Seeing Pastor Tom one of them, Bad Bart the leader, shouted “Who dare calls us out. Whoever it is is a dead man.” Bart brandished a twelve gauge shotgun and was noted as having more notches than any man in five counties.

Just then Michael stepped to the center of the street. His hands hung loosely by his guns and though he spoke quietly in a low voice everyone could hear him. The group of outsiders pulled their guns and were ready to fire in a second. I felt sorry for Michael who was clearly a lunatic, a dead one.

Then came the fastest movement I or anyone had ever seen. Rather thought we saw as Michael seemed to quickly draw his guns out and there was a flash and in a second Michael remained standing, the guns back in their holsters. Not true of the outsiders as there was a universal gasp when it was realized every pistol, every modern revolver, ever rifle was gone. The outsiders were empty handed and their eyes tear filled from near blindness.

Now Michael spoke in a loud clear voice that I still hear ringing in my ears. “I am just a messager here for the King. I have no power, he has all power. I have been given the voice and the way to make this last appeal. The King is coming and His sheep will be cared for as he loves them and those who deny him will have eternal damnation. You have let yourselves be dominated by control seeking terrorists pretending they can save the world. They are Satan led. Repent now before it is too late.”

Almost by signal Michael’s horse had somehow detached himself from where I tied him and came to his side. With a leap Michael was on the horse and about to ride out of town. However, Pastor Tom stood near and cried “Wait, thank you for coming, but what brought you here to Pennyworth?”

Michael seemed to smile for the first time. “Why you did Pastor Tom. Your prayers and others. Prayer is the most powerful instrument you have. Appealing directly to God.  And where the Boss Man sends me, I go.” With that he was off.

I won’t say to never be seen again. I knew we would see him and right there we all knelt on the street in prayer. Even Bad Bart who was crying like a baby over his many sins in life. We all were. And this is how the West was won again.
Share
Facebook Twitter Pinterest Reddit Share via Email Print

Tyler O'Neil: Making Hate Pay: The Corruption of the SPLC

Why Do Democrats Hate America?