This country has been through a lot in my 70 plus years. But I can’t remember when we’ve ever been through so much in such a short time.

Back in the 60’s we had the Watts Riots, the Kent State Shootings, the assassinations of the Kennedy Brothers and Martin Luther King, and the killing of Mary Jo Kopechne by another Kennedy brother. We had the Cuban Missile Crisis, the Chicago riots, and the Black Panthers. Crooked Richard Nixon resigned in disgrace. The Cold War turned tragic and terrible in Vietnam. It tore the country apart and cost the lives of more than 50,000 young Americans.

In the 80’s and 90’s, the various crises seemed more contained, and further apart. Iranian revolutionaries took more than 50 Americans hostage for 444 days. The Savings and Loan crisis drove a third of America’s lending associations into bankruptcy. The brutal police beating of Rodney King led to more riots. The first Gulf War showed the world the power of American technology in war making. The Hubble telescope, the Space Shuttle, and the advent of the World Wide Web showed the power of American technology in peace making.

And, of course, at the turn of this century, there were a number of terrorist attacks culminating in the attack on the World Trade Center. A host of minor and major wars, battles, and counter-terrorist operations followed. Then there was the world wide economic meltdown of 2008.

But have we ever had so many events, one on top of another, that so adversely impact almost every American at the same time?

The Mueller Investigation, impeachment, a global pandemic, economic catastrophe, nation wide protests, devastating riots, a national assault on police, and a Cold War with China – all in less than 6 months.

In 2016, Hillary was supposed to win. Instead, her arrogance and flaws made her lazy in the campaign’s final weeks. Trump, by contrast worked till the last minute, attending rallies, press conferences, and public appearances. He had the unkind gall to tell Americans the truth. Our politics were broken. Politicians were dividing Americans and driving America to ruin.

He promised to build a border wall, stand up to terrorists, negotiate fairer trade rules, bring manufacturing jobs back, and revitalize our economy. He promised to put America first, end the Obama Iranian deal, revisit NAFTA, require allies to pay a larger share of their own defense, and stop America’s growing dependency on a Chinese communist government bent on world dominance. 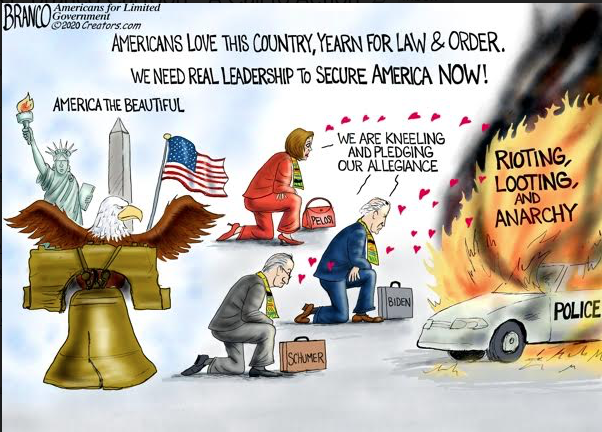 It’s exactly what people wanted, and exactly what America needed. Trump defied the political polls and pundits, and he won.  And then Trump kept his promises; moving our country from corruption to transparency; from abusive trade deals by foreign nations to fairer trade, from excessive regulation and punitive taxes on America’s job creators to common sense, lower taxes, and more freedom.

Even before Trump’s swearing in, the political swamp creatures were conspiring to oust him. Obama had decimated the military that Trump promised to rebuild so a military coup was out.

Instead, they used other tools. The FBI and Intelligence Agencies still under the control of Obama appointees. Political investigations by Congress. False allegations of treason made by politicians, media personalities, and Obama intelligence personnel. Impeachment. Harassment of patriots like General Michael Flynn. Calls for social shaming of Trump staffers and supporters.

Then the Chinese communist government set loose a killer virus, forcing most of the world’s economy into lockdown, and seriously damaging the incredibly successful economy Trump’s policies had built despite every effort by Democrats to undermine his presidency.

Following the worst of the pandemic, just as the economy was starting to open, George Floyd was brutally murdered and justifiable protests and unjustifiable riots, took center stage. Cities burned; cops and civilians targeted; shops, stores, and banks destroyed; monuments torn down, and America plunged again into racial conflict.

Progressive Democrats egged on radical groups like ANTIFA and Black Lives Matter so demands grew ever more outrageous. Now those groups, and those Democrats, want to cut police funding, or dismantle departments all together.

Those same progressive Democrats are also calling for taxpayers to pick up the billions in damages caused by rioters.

The old adage comes to mind, “You broke it, you own it!”

In 200 plus years, this country has been through a lot. But for the last 4 years, Democrat leaders have tested the bounds of decency and law as nothing has ever done before, all in the name of winning political power.

In the past 5 months, they’ve gone even lower. They’ve made America a living hell in an effort to win this election.

I hope Americans are as heart-sick about it as I am. Whether they like Trump or not, I hope they will reject Democrats for the pain and damage they’ve caused their fellow Americans out of pure political cynicism and a thirst for power.

Greenfield: The Jonestowning of America