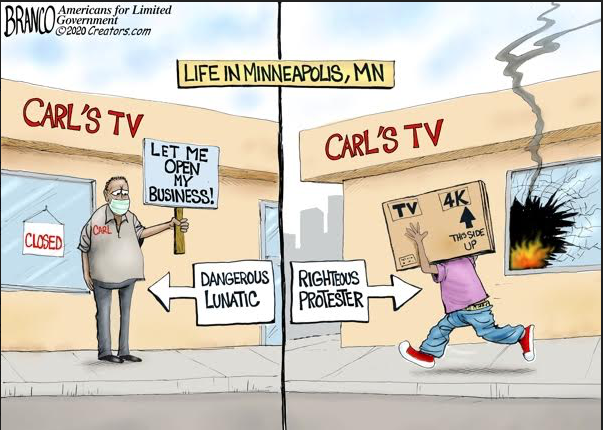 ANTIFA and BLACK LIVES MATTER love this. They’ve transformed what started as an arguably righteous protest over a killing we all agreed was horrible, to acts just as evil as that killing.

They’ve burnt down black-owned businesses, they’ve endangered the lives and livelihoods of those they claim to represent, they’ve attacked police who were as outraged as the rest of us by the killing that started it all.

Protest in America is legal. Very often it’s justified. Destruction is not. Looting is not. And, most certainly, assaulting law enforcement officers is not.

Think about it. We all pretty much agree the 4 cops in Minnesota responsible for George Floyd’s death should be fired. They were. We all agree, they should be investigated, arrested, and prosecuted. That’s happening too. One has been arrested and charged with murder. I expect the others will soon be arrested as well.

So why all the rage? It can’t be because Donald Trump thinks George Floyd’s death was acceptable. He does not, and launched an immediate federal investigation to assure the killers are brought to justice. It can’t be because white people think killing a black man is ok. 99.99% do not. It can’t be because law enforcement thinks it’s ok. The vast majority do not. So why the destruction, looting, assault?

I believe this is no longer a protest. It’s an insurrection. It’s an attempted overthrow of local, state, and federal government. And it’s all being perpetrated by a rather shapeless group of malcontents, anarchists, and communists known as Antifa.

Many on the left disagree. In fact, they point out that Antifa only stands for anti-fascist and so anyone who opposes Antifa is really pro-fascist. That’s pure asininity. Antifa is far more than the left wants us to believe. They are radicals dedicated to the destruction of America.

Donald Trump called them domestic terrorists. The Justice Department so labeled them officially. Antifa is proving daily on the nightly news they deserve the title as they ramp up the rage and lead some in the crowds to commit destruction and violence.

Others are just there to protest. Those people are holding signs that say, “Don’t Kill,” and “Stop The Violence.” Some have taken up arms to protect the stores and restaurants that belong to friends and serve their neighborhoods.  None of them support the horrendous killing of George Floyd, but they know the destruction is counter-productive. They know it hurts the poor most.

None of that matters to those in Antifa and Black Lives Matter. To them, it’s not about George Floyd’s murder at all. It’s about satisfying their own hateful rage. They don’t want a better America, they don’t want any America. They want to burn, destroy, and kill.

And they know where they can best get away with it. In cities and states run by liberals.

Remember Ferguson? They knew then that the city would tell police to stand down, and that it would provide them carte blanche to destroy. And that’s exactly what happened.

During Ferguson, Black Lives Matter coined the chant, “hands up, don’t shoot,” to illustrate a tendency for cops to shoot innocent blacks. It wasn’t true. Even he Obama Justice Department’s investigation found no wrong doing by Ferguson police. No one was indicted. But a city was destroyed and lives were damaged.

Now, liberal mayors and governors across America are allowing the same kind of destruction. And again lives are being damaged.

In Minneapolis, a retiring fireman and his wife were days away from opening a neighborhood sports bar. Rioters torched his building. More, they torched the dreams of a first responder who had worked his entire left protecting and serving others. The fireman was black.

So was his wife who told rioters she and her husband stood with those who protested the murder of George Floyd. And that she and her husband were trying to contribute to a better community. It didn’t matter though because the ring leaders who burned down the business weren’t from Minneapolis. They were bused in from elsewhere to cause as much damage as they could. The exact same carnage is happening all over America.

Back a few years ago when Rudy Giuliani was Mayor of New York City, he took a different approach. When rioters then threatened to run amok, Giuliani went on TV and warned rioters their behavior would not be tolerated, and law breakers would be arrested. He then unleashed the power and strength of the NYPD and arrested hundreds of violent rioters. The riots ended, and the protestors continued to exercise their lawful rights.

Where is law enforcement in the cities now being burned to the ground? Where is the national guard? Why are only a few dozen people being arrested? Every looter, every arsonist, every member of Antifa or leader of BLM should be arrested and jailed.

No American who watched the video of those four police officers killing Floyd George could be anything other than outraged. No one should live in fear of unjust treatment by police. And we should all protest that kind of injustice when we see it.

But how does burning down your neighborhood, or destroying the businesses of your community, or damaging the lives of others serve the cause of justice?

The mayors and governors who don’t have the guts to do the right thing and reign in law breakers, put us all at risk. It’s not the first time. The vast majority of cities where rioters caused chaos this weekend are run by Democrats who also disregarded the law and made residents unsafe by declaring sanctuary status.

But the Antifa people who are using this tragic event as an excuse to burn, rob, and assault should be locked up for a very long time. Now that Trump and the DOJ have categorized them as domestic terrorists, it’s time to arrest and prosecute them, and end the plague of Antifa.

Greenfield: Another Night in Lootopia