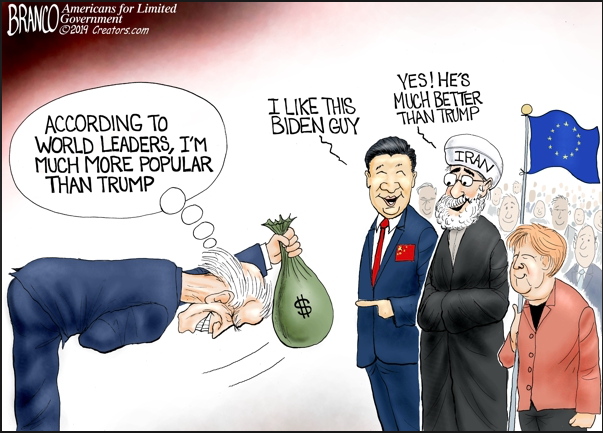 Candidates for president are fond of telling voters what they’ll do on their first day, or first hundred days, or first term in the White House.

His cancer cure seems especially hurtful given the millions of Americans who suffer agonizing pain, anxiety, and desperation. Joe’s cancer pandering is way beyond the veil of decency even for the most cynical politician.

It’s not exactly clear what he means by making America more fair to those who consider themselves LGTBQ. Thanks to Obama-Biden, such folks are already protected by equal rights laws. They can marry. They can mostly use whatever public bathroom or shower room they care to.

It’s also a bit confusing when he says he’ll fix institutional racism. Or even what he means by institutional.

Clearly, there are vestiges of individual racism in America, but institutional racism? He hasn’t offered specific instances of institutional racism, or any ideas to address it. It’s already illegal to fire or not hire based on race. Fair housing assures banks can no longer deny loans based on race. Crimes against minorities often carry special penalties when they’re adjudged hate crimes. Companies and colleges are aggressively seeking to recruit black employees, executives, and students. Likewise, local, state, and federal law enforcement. No American can be denied the right to vote unless they’ve committed a serious crime.

More to the point though, if racism as he suggests is endemic and institutional, and if such problems can be corrected in a month, why didn’t he fix them during his 6 terms in the U.S. Senate or 2 terms as Vice President?

Far more clear in his intent, and the inevitable outcomes, is Joe’s promise to make 11 million illegal immigrants citizens. It should first be mentioned there are probably at least twice that number living in the U.S., but progressives usually understate the actual number for fear people will wake to the potential costs of turning those here illegally into new citizens thereby making them eligible for more taxpayer funded benefits.

It should also be mentioned that the 20 million plus illegal immigrants in this country will likely double once Democrats are able to loosen border rules — another one of Biden’s top priorities.

What’s the benefit to Democrats for making 11 million, or 20 million, or even 40 million illegal immigrants citizens? They’re counting on those newly minted citizens voting for them in every election until Kingdom comes. If they’re right, it means they’ll never have to face another one of those pesky competitive elections against Republicans.

What will it cost America’s taxpayer? Billions and billions of dollars as former Illegal immigrants become eligible for even more welfare, housing subsidies, food stamps, health care, and education.

But that’s not all.  It will also cost millions of jobs, especially entry level jobs that will prevent the next 2 or 3 generations of poor Americans from having any chance to gain the first rung of the economic ladder.

But that’s still not all. Because if we’re facing 20 million or 30 million new illegal immigrants becoming citizens, it means 30 million to 50 million new students entering America’s grammar and high schools.  It also means more students entering colleges.  How will American students fare when their already struggling schools become centers for teaching English as a second language? Especially in inner city schools already on the brink of total failure, students will face insurmountable odds against ever escaping poverty.

But wait there’s more. Because when all those poor teens lose both the chance for a decent education and the opportunity for a job, it’s predictable they’ll take their hopelessness out on everyone else – starting with their own neighbors.

Illegal immigrants in gangs, or those prone to crime, should all hear this as well. Joe has promised there will be no deportations during his first 100 days as president. For those with a burning desire to rape, murder, steal or otherwise commit mayhem, you now have the time-line of when to start.

Joe’s ban on deportations, combined with the threat by other Democrats to defund police, should provide illegal immigrants not only an open window to commit their crimes, but the assurance they’ll never be arrested or convicted of them.

Terrorists in our nation illegally may want to start making their plans as well.

Joe has suggested he’d only expect to serve as president for one term. Strange, given a 40 year career as a professional politician. But then the degree to which his memory and mental acuity are failing make it obvious he’s unlikely even to make it through his first four years.

Another factor might be his inability to find a Democrat willing to serve as his VP for 8 years what with the deceit, incompetency, corruption, and family favors we can expect from a Biden presidency.  But then again, given the Democrats he seems to be considering, it’s unlikely corruption will be a moral stumbling block to their joining a Biden ticket.

From what we’ve seen so far of his campaign, it’s also obvious Biden won’t be “his own man” as president. Obama and Pelosi are the clear shot-callers in Biden’s world. Presumably, his VP will join that rank as well.

Even with all the string-pullers manipulating Biden though, his history of dishonesty, plagiarism, shifting principles, major gaffs, and personal puffery almost assure he’ll say or do things that seriously harm our Republic.

It wouldn’t surprise me if it’s something he does on his first day, first month, or first hundred days. One thing is for sure, given Biden’s loss of mental capacity, and the enthusiastic willingness he’s shown for bending the knee to the far left of his party, we won’t have to wait long.

Gatherings Aren't Safe (Unless They're For a Leftist Cause, of Course...)

The Devil of Our Divisions