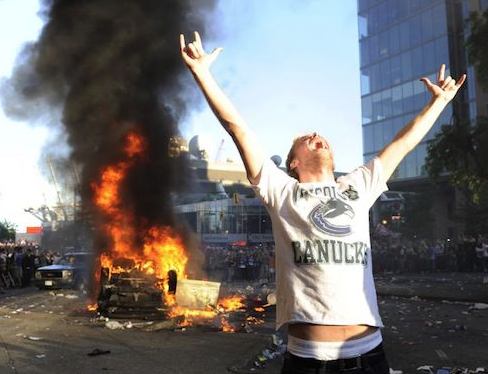 This is just a guess, but it would be surprising if one in a hundred of the ANTIFA or BLM thugs leading the rioting and looting pay income taxes. If they had skin in the game, they might not be so quick to burn things down.

But thanks to tax-the-rich attitudes that have infested our politicians for decades, about 47% of Americans avoid paying any federal or state income taxes at all. That means about half of our population simply lives off what the rest of us are forced to ante up each year.

I’m not saying they don’t pay any tax. There are sales taxes. Gas taxes. Bridge tolls. But those taxes go largely unnoticed. That’s how liberals can pander to the poor on one hand, and tax just about everything they buy on the other. Sales taxes don’t create the same sense of investment income taxes do.

When that sense of disinvestment is combined with the “everyone gets a trophy” entitlement mentality advocated by politicians like Bernie Sanders and Joe Biden, and the deep emotional animosity against Donald Trump promoted by leftwing opinion leaders, you’re pretty much guaranteed a perfect storm. We’re seeing that storm rage on the streets of our cities today.

Of course, it’s more complex than that. Most of the rioters look to be in their teens and 20’s. Some are no doubt older. I’m sure many come from “good” liberal families. Bill DeBlasio’s daughter comes to mind who was arrested for protesting in the middle of a crowd throwing bottles and bricks at police.  DeBlasio said he was proud of his daughter.

But most of the looters and rioters have probably been victims of liberal big-government Democrat policies their entire lives.

They’ve been forced into schools dominated by teacher’s unions that care a lot more about the jobs of their members than students. Ladle on top of that the influence in our education system of 20th century humanist relativism that says there really is no truth, or truth is whatever you believe it to be. Students have never learned real American History, civics, or basic economics. They’ve been told America was founded on racist slavery policies.

They’ve been told their failures are not their’s, but the result of an irreconcilably racist society forever tainted by the poison of slavery. Can anything more corrosive be ingrained in young imaginations than that failure is certain and absolute without recourse or appeal?

Can anything be more anti-American given this country was actually founded on the notion that birth does not dictate destiny, and that every person is equal in dignity and infinite in value.

I’m not saying we’ve always done it perfectly, we haven’t. Slavery was evil and dreadful. Jim Crow twisted our country’s aspirations for equality in abhorrent ways. Despite our failures, though, America is and always has been that shining city on a hill Ronald Reagan talked about. Just ask the people around the world who would give anything to come here.

But most students, certainly not those raging in America’s cities this past week, were ever taught that. And not those progressive celebrities, elites, and academics who tweet relentlessly in support of the destruction. But given the dramatic failures of our education system it’s no surprise we’re producing a generation of ignoramuses with no understanding of what they’re doing or why.

The killing of George Floyd was horrible. The murderers who did it will pay as they should. But George Floyd was just an excuse for the rage and frustration of people who never learned better.

Of course, the leftwing media sympathize. They encouraged the rage when they promoted a false narrative that America is endemically racist. What doesn’t fit the narrative, they discard. What can be made to fit, they sensationalize.

And progressive politicians won’t stop the carnage, they helped the media start it. For decades they’ve turned their cities into engines of despair with few jobs, failed schools, rampant crime, exorbitant costs, and endemic corruption.

Now, the bill for 5 decades of liberal dominance is coming due to the point where local police are overwhelmed and the national guard or military are needed.

Bill DeBlasio says New York City is perfectly under control. The demonstrators are “overwhelmingly” peaceful. The cops can handle the rest. Except the city is in flames, hundreds of stores have been looted, and he’s not letting the cops do their jobs. Instead, the cops are under assault and nearly powerless to fight back.

In one case, a viral video showed a NY policeman pulling a gun on a crowd. DeBlasio went on national television to say the cop should be fired that day. Then the rest of the video came out and showed the cop was defending his supervisor who’d been assaulted from behind by a gang throwing bricks and bottles.

DeBlasio finally called for a curfew. He announced it at 7 pm and said it would go into effect 4 hours later. He gave police 4 hours notice to prepare for something they haven’t done in 2 decades. And who in the world thinks an 11 pm curfew will slow the chaos?

In Illinois, the attorney general wants to sue Trump for threatening to call in the military. But then, more than three dozen people were gunned down in the Chicago area the month before the riots started, so maybe the AG there hasn’t noticed any difference.

We’re lucky we have a president who will do what needs doing to protect the American people even when progressive governors and mayors will not.

Heaven help us all if Joe Biden wins in November. If that happens, we can expect more of the same progressive philosophy of relative pragmatism with it’s big government ethos, entitlement mentality, race-hatred narratives, and failed education theories that have condemned so many of our young people to certain failure and perpetual rage.

The Bibi Trial Begins: A Guide to the Trials of Israel’s Prime Minister