The mob gives each of its members a sense of deindividuation – a sign of strange courage that lets them unleash the beast within. It is this sight that we’re viewing on the streets today – an unhealthy mob that rages through the country, trying to play the cards of being peaceful. George Floyd’s death by the utter brutishness of an officer cannot be justified by any means; so is the case with the violent protests that are spreading through the US. To glorify it and turn a blind eye to the looting and destruction that is taking place alongside the banner-bearing is to be ludicrous in a situation that demands us to think rationally.

Racist thoughts deserve to be eliminated. The anger that people find burning within themselves upon realizing that discrimination still persists is justified. Nobody should meet a fate similar to that of Mr. Floyd. The rage is justified, but we cannot say the same about the riots that have broken out. It almost seems as though many got a reason to simply wreak havoc and rip others of their livelihood.

Romanticizing this destruction throws open a challenge to lives – if meeting violence with violence was the only way out of times like this, then perhaps the Civil Rights Movement wouldn’t have materialized as a monumental 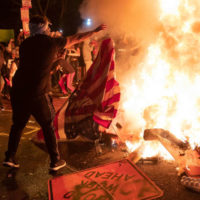 feat in history back in the 1960s. If someone were to express their discontentment for the riots, they’d be accused of being apathetic; of not caring enough about the system of justice; of just being too privileged to realize these complexities in the society. But the very people who hurl these accusations, on reaching the ‘comfort’ of their homes, feel it convenient enough to blanket themselves with the same ideas that they now oppose.

The double standards involved in this petty game does not prove to be worthy of being inducted into the larger political scenario. This cannot be put up with. Mr. Floyd’s girlfriend too couldn’t comprehend the ‘sanity’ of the riots: “I am heartbroken. Waking up this morning to see Minneapolis on fire would be something that would devastate Floyd.”

Following violent protests and riots across the country by groups like #BLACKLIVESMATTER and #ANTIFA a movement that has no central tenet other than preventing fascism in the world. The anarchist, radicals, and extremists terrorizing residents, protests, and rioting… they are the antithesis of the destruction of our society at its core.  After the death of George Floyd, President Donald Trump said on Sunday the U.S. government will designate the anti-fascist group Antifa as a terrorist organization.

If truth be told, it’s really a pity Antifa seems to have so much energy to oppose some thoroughly disgusting but ultimately unrepresentative knuckle-dragging bigoted thugs but has very little meaningful or substantive criticisms other than circumventing a protest and forcing riots. Agitating violence and breaking down small businesses, looting, setting fires everywhere. It is race relations using the same playbook as the race war accelerationists of the 1960s. But it’s coinciding with widespread unemployment, a deep recession, and COVID19 pandemic- or is it something that is so evil. “Introduce a little anarchy upset the established order and everything becomes chaos” Dark Knight, 2008″

We have no leaders–no black leaders, no religious leaders–stepping up calming the masses only the evil leading these children. How to talk to your kids about the protests, police, race relations with our places of worship closed by the same local governments not doing enough to protect our communities as President Trump grasps his Bible in front of St. John’s Church after being set afire.

Burning buildings, overturning cars, or targeting random strangers are not solutions that’ll undo underlying racist sentiments – letting one’s needs be articulated and playing an active role in policymaking will do what these riots cannot, which is bringing about changes that are far from being ephemeral. If anything, these disruptive riots stall reforms. How can one expect families to feel safe in our communities where these mob-movements are growing by the day, endangering lives all along? Violence is violence! At a time when the country is leaving no stone unturned to lift the economy back to its prime, violent protests are only going to leave adverse economic aftermath.

The Great And Terrible Wizards of Lockdown