Have you ever read a story from a purported journalist and said. “This is so surely one sided that it cannot ever be called news, it must be opinion.”? Ever since rejoining the Twitterverse very recently, I have been more and more appalled at what is being flouted as “news” these days.

In light of the current controversy over Twitter “fact-checking” two tweets of The President, I decided to look into the ethical responsibilities of journalists purporting to report the “news.” While this conversation could in fact be riddled with examples of journalists disregarding their ethical obligations, the below discussion should serve to at least exemplify that a lot of what is told to us is in fact opinion wrapped around a “fact” and floated as truth.

My journey into the ethical obligations of journalists landed me on the Society for Professional Journalists webpage where they list their Code of Ethics. This entity that has been around since 1909, has four principles listed in their Code of Ethics, “seek truth and report it,” “minimize harm,” “act independently,” and “be accountable and transparent.” While I would love to take a deep dive into all four of these principles with examples of the violation of each, I will focus on the first principle in light of this “fact-check” debate. Remember, there is a very large difference between a journalist who is meant to report the facts to the audience and a political commentator that will take the news and tell you their interpretation of the facts as reported. 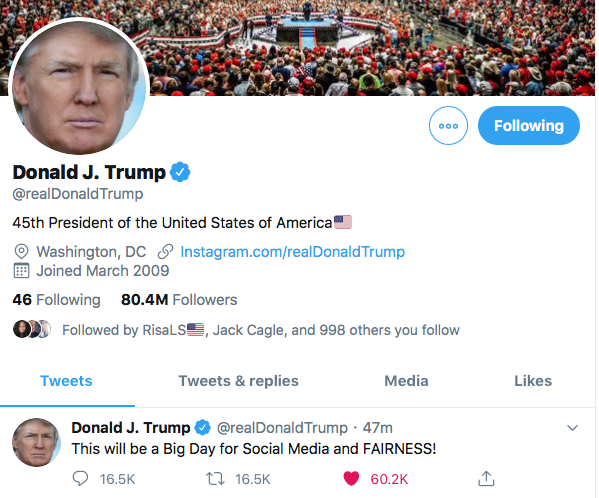 “Seek truth and report it.” This one should be a very straightforward ask of any journalist. Many journalists may even believe that they hold to this tenet strictly claiming, “all we write are the facts” but, facts are objective in nature. Facts are facts no matter if you are on the left or right side of the political scale. So, when addressing a story about Twitter fact-checking two of The President’s tweets, you would expect a journalist to objectively report what the tweet said, what Twitter said, and any important contextual facts on both sides of the debate that may give a reader the opportunity to form an educated opinion.

Instead, you have seen an onslaught of “news” stories from various outlets who are reporting Twitter’s contention that, “fact-checkers say there is no evidence that mail-in ballots are linked to voter fraud,” and “conveniently” leaving out the “fact” that there are over 1200 plus proven cases of voter fraud, linked to both Democrats and Republicans, in a database created by The Heritage Foundation. While some news organizations did say they looked for cases of widespread fraud but found few, others were blatant in not representing that there are in fact documented cases of voter fraud which, after leaving this important contextual fact out, could lead the reader to believe that our election system is as pure as the driven snow.

Before anyone says, “well that group [Heritage] is a conservative organization,” as noted, they have put together an unbiased database of proven cases of voter fraud involving both major political parties so bias cannot be said to exist in this particular collection of data. Information like this would be expected to be included in an objective news piece that was meant to inform and not persuade the reader. It is a journalists’ ethical responsibility to report the facts in an unbiased, objective way, that presents both sides of the debate and contextual information in support of both sides in order to let the reader decide. We cannot say most who call themselves journalists conduct themselves in this manner at all when carrying out their alleged profession.

We are in an era of this country’s history where journalism, true journalism, is required if we are to remain a free and lasting republic. Our history has shown that a free press reporting objective facts is vital to the population. When journalists do their true job, reporting objectively, our country is able to have open debate and free opinions of the citizenry which is very healthy indeed as our voting population is informed by the facts and vote based on their personal view of the facts. Today however, we see commentators putting out their biased opinion and floating those as facts under the name of journalism.

My I hope is that this debate about fact-checking speaks to the hearts of journalists and makes them have a “come to Jesus moment” about their own approach to reporting the news. While I have this hope, I will not hold my breath waiting to see it come to fruition. Journalism seems to be quite dead in America but can be revived if a few brave men and women rise up and begin to report the facts again and allow all of us to freely form our own opinions. I challenge the profession to get back to a place of ethical reporting of the news, one unlike the current unabashed biased commentary we see being waved in our faces as fact. Only time will tell.