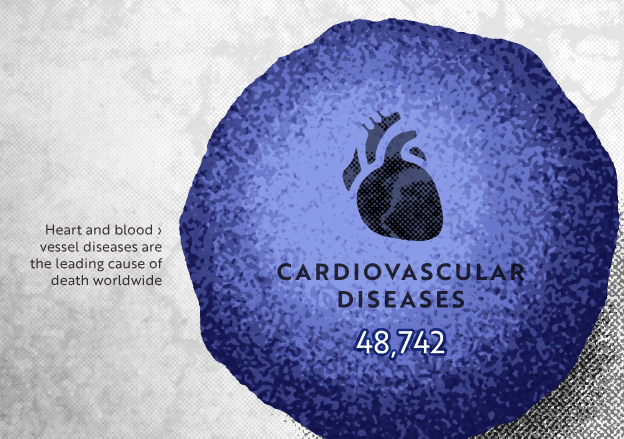 A friend of mine sent me a highly interesting link that paints a remarkably interesting picture of the world of today. The page I landed on (here) was a very simple graphic displaying proportional “spots” on the page showing how many people die from many different causes in the course of a 24 hour day across the globe.

The first and most striking spot was the number representing cancer deaths worldwide – the second greatest cause of death listed at 26,181 per day.  Being a cancer survivor at this point in my life, I guess that one struck home pretty quickly.  There, but for the grace of God, go I – a statistic.  A spot on the page of world history.  But I digress…

The point of the page was to put the current “pandemic” into a sharper perspective. Given the extremes governments throughout the world (with a few notable exceptions) have taken to allegedly reduce the impact of the Covid-19 outbreak, that is a worthy effort. As shown on the page, the average number of daily deaths between December 15, 2019, and May 15, 2020 for Covid-19 was ranked just a tiny bit above the number of suicide deaths on any given day of the week.  It was just a little under the number of daily deaths from HIV/AIDS.  While it might be difficult to identify potential suicide victims before-hand, I don’t recall much of any effort similar to what we have seen with Covid-19 back in the days when HIV/AIDS was at its peak (likely much higher than the average shown on the chart).

So…exactly what is it that has focused such aggressive measures by government to contain the population and play such extreme havoc on the world’s economy under the guise of fighting our current virus problem?  Yes, in case your focus has been domestic lately, the economic downturn has struck other countries of the world that are no better equipped to deal with such a crisis than we are here in the U.S.

While not quite the same in sequence, one might take a look at the stages of grief that most people experience following a loss. There is no doubt of a significant societal loss from both the high number of deaths and the threat imposed by the massive loss of employment and income being experienced in the wake of state-wide shut-downs of businesses that can ill afford the hits.

Denial – Even though some isolated information reached our shores in 2019 pointing toward something bad happening in China, little was done to prepare our population for the potential carnage that followed.

Anger– A natural reaction to the fact that a country on the other side of the world knew about this and colluded (there’s that word again) with the World Health Organization (WHO) took it upon itself to unleash a heretofore unknown killer on the rest of the world for highly suspect motives yet to be pinned down precisely. It is perfectly reasonable for everyone to be highly angered by China having closed off an entire province to prevent its spread within the country, but leave airports open for international fights that spread the virus to many nations of the world in less than a couple weeks.

Bargaining– Playing the odds, so to speak, falls in nearly the same place as bargaining and nobody wanted to consider the odds when they decided to take draconian actions that defy logic.  Previously, we have had significantly similar or worse pandemics sweep across the world and it has always been the habit of governments to warn their populations and recommend protective measures for the most vulnerable segments thereof.  Never has it been government policy anywhere to tell women to avoid pregnancy because of the threat of “neonatal disorders” even though the average daily deaths from this cause is in the vicinity of double the number of daily deaths from Covid-19.

Depression– I’d say that this is about where we are situated these days.  The thoughts of how many are going to continue to put food in their kids’ stomachs, where their next paycheck will come from, etc. are enough to depress anyone with any concern for their families. Unfortunately, the number of suicide deaths very well might rise as a direct result of the trouble with the economy – one that was booming like never before right up to the time Covid-19 entered our vocabulary.

Acceptance– This one is two-sided.  Government has not accepted the reality of the situation in its charging into unknown territory without the benefit of balance and logic.  All that has resulted so far has been easily predictable.  It is also necessary for the public to realize and accept that 1) viruses come and go and given the relatively moderate impact of this one, they are making more out of this than should be made, and 2) The fact that nearly all (in the 95% range) of the deaths attributed to Covid-19 have been among vulnerable populations that already had comorbidities that made them susceptible and easily overcome by the virus.

The facts need to be accepted.  And before anyone jumps down my throat for “trivializing” the loss of a family member, keep in mind that the total number of deaths per day accumulated on the above-referenced chart comes to just under 150,000 deaths per DAY. That means around 54.5 million funerals attended per year globally.  When compared to the 319,031 deaths from Covid-19 (per Johns Hopkins) as of May 19, 2020 (a.m.), one can easily see that this virus represents under 2% of all deaths and needs to be seen as something that needs to be addressed but kept in proper perspective. Never before has society been put in such immense and extreme upheaval over something of this moderate severity. It simply does not make sense…unless there are ulterior agendas at work.  This is what makes all of this so difficult to accept.

I won’t even begin to address the obvious list of motives here, but I believe that those who have the motives know who that are, and I believe if one truly takes a wide-eyed look at the facts and the statistics provided, one will see clearly that the disproportionate response to the virus can only be explained by said ulterior motives.  They will also recognize those people and groups.  In the case of our country, we are guaranteed the freedom to live our lives within the laws established by our representatives. What has happened in the past eight weeks or so has far exceeded the scope of our governments power to restrict those freedoms and hinder our ability to live freely.  This is certainly something that should be addressed in the coming days.  November 3 is fast approaching.  Vote wisely…for freedom.

The Leftist Mentality of Petty Tyrants