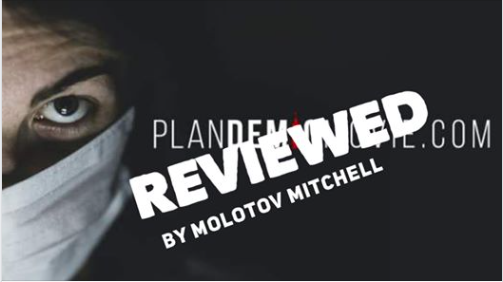 (Editor’s Note: This review was commissioned by We Are Thinking. If you’d like to receive more insightful reviews like this one, consider becoming a patron at www.wearethinking.com)

“Plandemic” has rocked social media more than any other film I’ve seen in the past decade. Serious charges are leveled, alarms are raised, calls for prosecution and that’s just from critics! The film is incendiary and amplified by our growing discontent as We the People waste away under house arrest. And while I’ve wearied of this economic shutdown, I didn’t want to believe everything I saw or heard when I watched this film. I did, however, want to get to the bottom of why it has rattled so many millions of viewers and even caused YouTube to ban the 30 minute film outright. Facebook, on the other hand, has allowed it to spread like a virus (so to speak). So here are my thoughts and findings concerning this strange and important documentary short.

After researching the film’s claims and the aspersions cast against its makers, I see no reason for YouTube to have censored “Plandemic,” and upon inspection, many of Dr. Mikovits’ claims appear to be true. Most notably, her point that tax-funded scientists are allowed to patent and profit from discoveries because of the Bayh-Dole Act was a troubling pill to swallow (so to speak).

Upon reading the Act myself, it seems that Dr. Mikovits left out that while public servants may secure patents, the government reserves the right to seize the patented discovery if it is needed for the good of the public. However, this does not seem to occur very often, so her point is largely true. It appears to be a clear conflict of interest that has probably corrupted the integrity of some public scientific agencies, who could push for certain treatments and responses to pandemics based upon their personal financial interests, which should concern all Americans (especially at this juncture in history).

Dr. Mikovits has been attacked for saying that U.S. government agencies like the CDC are inflating the death toll by financially incentivizing doctors to report all deaths of patients with C-19 as C-19 deaths, even if the cause was something else. I don’t understand how this accusation can even be leveled when Dr. Birx herself has stated that the death count is inflated in that very way. The CDC website reflects the same with separate death tolls for C-19 and C-19, influenza and pneumonia. The former category is nearly five time lower than the latter.

As to the financial incentivizing, I could not corroborate Dr. Mikovits’ claim, but several doctors have attested to this. Critics have also assailed Dr. Mikovits for claiming that she was arrested for no reason and has vocally opposed global mandatory vaccinations. They are correct, at least in part. In her interview, Dr. Mikovits claims to have been jailed without cause, but she was arrested on the charge of theft, stealing scientific research from her lab. She was not found guilty. And she has opposed global mandatory vaccinations, but there are many people who agree with her position for many good reasons. I suppose the charge that she is an “anti-vaxxer” is the most troubling angle but in the film, the director asks her point blank if that’s what she is. She denies it and goes on to say that while she rejects some vaccines, her life is dedicated to helping people by developing good ones.

In closing, I believe that Dr. Mikovits makes many good points in the film, especially how vaccines developed with canines contain numerous coronaviruses, Dr. Fauci’s alleged financial stake in Remdesivir could pose a conflict of interest and how our immune systems are actually being destroyed by the government-mandated quarantines are critical to the current debate on how to move forward. In my opinion, everyone should see “Plandemic” and research the things that stand out to them. Is Dr. Mikovits perfect? Do I agree with everything she claimed? No, but that doesn’t change the many truths this film reveals. And knowing that, I think that those who wish to silence this well-spoken and accomplished scientist should be the ones we scrutinize. Why the hatred? What are they so afraid of? And in some instances, what are they hiding?

Molotov Mitchell is a writer and producer for We Are Thinking, a Q&A site with answers from experts and Mensans.

Corona and the Serpent's Lie to Eve