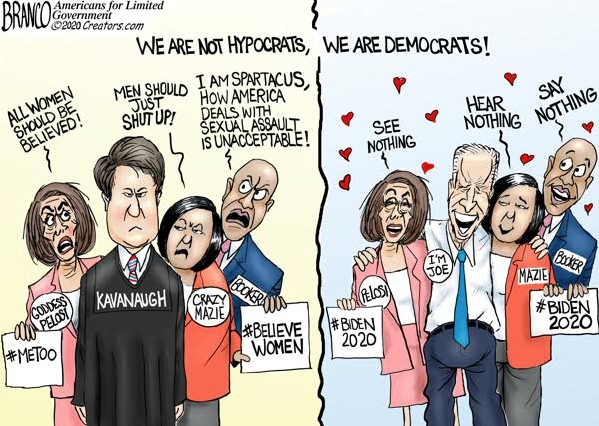 The thing about hypocrisy is that it’s only tolerable for the hypocrite because he doesn’t see it. It should not surprise us then when the hypocrites are quick to accuse their opponents of being two-faced.

Alexandria Ocasio-Cortez thinks we should all pay huge tax increases and wants to give the IRS more power to find, investigate, and prosecute taxpayers who hold out. And yet, AOC has owed $1,877 in corporate taxes to New York for 6 years. Taxpayers send her $175,000 every year so she can pass laws she doesn’t think should apply to her, but she won’t dig up $1,877 to pay her tax bill.

That’s the least of her worries though. Despite all her railing against money in politics, AOC faces multiple civil penalties and even jail time for hiding the fact she controls a political action committee that engaged in massive reporting violations, accepting illegal contributions, and exceeding donation limits.

For all our global proselytizing about “rule-of-law” being an existential necessity for a free society, why do we  tolerate politicians like AOC who believe they’re above the laws they themselves pass? And AOC is hardly the only one.

Illhan Omar of Minnesota married her brother to protect him from deportation. Ironic he’d want to be here since she’s most famous for ranting about America’s many evils. She also spouts hate speech against Jews on a regular basis. So far, she’s received not even a slap on the wrist by her Democrat colleagues.

Dianne Feinstein, the senior US Senator from California, claims she cares about maintaining America’s national security, honoring our military, and preserving world peace. But she wants Americans to give Iran $5 billion to help them deal with the coronavirus, even though Iran is the planet’s number one sponsor of state terror. The Mullahs who run Iran have killed Americans. They’ve killed other Muslims in their own country and around the world. They’ve arrested, tortured, and killed their own people for speaking out against their cruel regime. The idea of giving them billions of dollars is absurd.

Democrats on the Senate Judiciary Committee roasted Brett Kavanaugh because a woman claimed he’d acted improperly toward her when they were in high school. There were no witnesses. No one could even remember her complaining about it at the time. What evidence did exist indicated she may have had strong political motives for making the claim. Yet Democrats said the woman “must be believed, always.”

But when Tara Reade recently accused Joe Biden of sexual assault, Democrats clammed up. Witnesses verify Ms. Reade told them of the assault at the time it happened. A recording has been uncovered of the woman’s mother recounting the story on Larry King Live. None of that matters to Democrats. They now claim a different standard. Joe Biden should be believed, the woman should be shunned. Talk about hypocrisy!

Last week, Democrats claimed it was really the Republicans who stalled Covid-19 relief for America’s workers and business owners when they refused to bow to demands the Democrats made as the price for their support for the legislation. And what were those demands? More money for a long list of leftist government programs that have nothing to do with the coronavirus, including a requirement that states allow everyone to vote by mail.

Will mail-in ballots 7 months from now really protect us from the Wuhan virus? It’s more likely they want loser voting rules so they can tamper more easily with election results. If people don’t have to show up in person or with a valid I.D., then the chances of getting away with fraud go up. Under 18? No problem, use someone else’s mail-in ballot. Want to vote multiple times? Simple, use the mail-in ballots for people who are dead. An illegal immigrant? No worries, there’s lots of deadwood on the voter rolls, vote under one of those names. Using Covid-19 as a way to steal elections is beyond hypocritical, it’s shameful. And, so far, it’s criminal; but with vote-by-mail, good luck trying to prove it or hold anyone accountable.

Talk about using Covid-19 to justify poor intent, how about those Mayors and Governors who are now insisting the federal government should bail them out because of bad economic policies committed over many decades. In Illinois, New York, California, and Connecticut – to name just a few – Democrats cut sweetheart contracts with public employee unions. Cadillac healthcare, generous pensions, long vacations, paid sick leave, and guaranteed employment no matter how lazy or incompetent. But the politicians found it a lot easier to make promises than to pay for them, so a host of states and municipalities now face bankruptcy.

It’s no surprise officials in those places want taxpayers everywhere else to bail them out. But trying to hide their malfeasance in a Covid-19 wrapping is ridiculous and shameful. If Congress goes along, expect more malfeasance and corruption, more threats of bankruptcy, and more bailouts of other jurisdictions. Even localized hypocrisy eventually costs everyone else.

It’s not just hypocritical but frighteningly authoritarian these days when Democrat Mayors and Governors are quick to arrest moms for taking their kids to a park while releasing thousands of hardened criminals from prison. Try explaining how a blanket on the beach is more dangerous than a thief with a gun. Democrats claim such prison releases are necessary to promote health and safety. Then they express shock when crime rates go up, and the prisoners they released last week are re-arrested this week. Their concerns for safety don’t pass the smell test when they put the innocent at greater risk of being robbed, assaulted, raped, or murdered.

The hypocrite can only stand hypocrisy because he denies it. While he may discern it in others, whether it’s there or not, he’ll never admit it in himself or those who share his particular brand of it.

From what I can tell, that’s the central problem with the leadership of the Democrat Party. And, it’s a big part of the reason we need to vote them out of office. They won’t see, can’t listen, and will never understand.