What do you get if you combine the destructive society-destroying policies of Bernie Sanders with the black hole of enthusiasm that is Joe Biden? That’s the new radically insane Democrat nightmare.

Bernie’s policies were terrible, but he had an enthusiastic following. Biden generated all the voter enthusiasm of spoiled tuna, but his selling point was that he wasn’t going to do all the crazy Bernie stuff. Now the Biden campaign is trying to unite the party by adopting some of the Bernie policies so that the Democrats are going to be stuck with all the unelectable socialist ideas and a boring candidate.

The worst of both worlds. 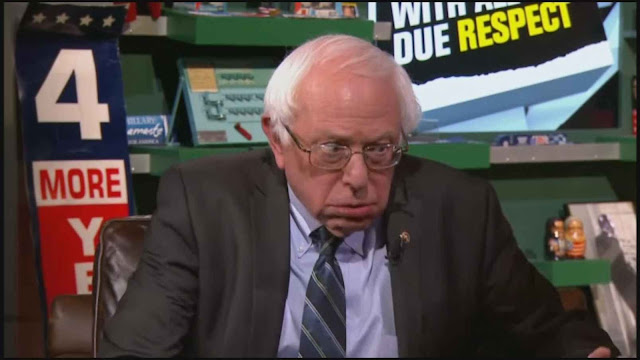 Biden is such a terrible candidate that he vanished from the media landscape until a sexual assault allegation against him went mainstream. And that’s in a media environment where the major news networks were so desperate that they had begun touting George W. Bush as a model of leadership.

When even the most biased media since Pravda can’t even try to make you look good, it’s bad.

Voters like Bernie Sanders until it’s slowly explained to them that he wants to take away their Medicare and let the Boston Bomber vote from prison. And those are just the policy outcomes he’ll admit to. Half a dozen 2020 Democrats threw themselves on the socialist hand grenade and endorsed Biden to stop Bernie. But from the looks of things, they might have just as well let Bernie grab the nomination.

The joint unity task forces of the Biden-Sanders campaign will have Rep. Alexandria Ocasio-Cortez co-chairing the unity climate change task force. That means putting the radical brat whose Green New Deal called for “the phasing out of American air travel” in charge of advising the Biden campaign.

Varshini Prakash, whose Sunrise Movement helped draft the Green New Deal, is also on the task force. The Sunrise Movement’s demand for net zero emissions by 2030 would wipe out most manufacturing and energy production in this country. That means people freezing to death in their own homes.

And then there’s the criminal justice task force.

The Bernie Sanders campaign had foundered when the radical socialist endorsed having the Boston Bomber vote from prison. Bernie’s pick for the criminal justice panel, Chiraag Bains, is an Obama DOJ guy from the Ferguson era, and a Soros Open Society Foundations fellow.

When Buttigieg dismissed Sanders’ call to have the Boston Bomber vote from prison, Chiraag Bains ranted that, “Felony disenfranchisement has its roots in racist attempts to sap black political power.”

Bains has tweeted that he supports, “voting for the incarcerated.”

The Boston Bomber voting just went right back on the table.

If you think that’s as bad as it can get, Bernie’s picks for the economy task force include Stephanie Kelton, a proponent of Modern Monetary Theory.

MMT simply states that the government should just print as much money as it can.

Kelton, the author of The Deficit Myth, says things like, “There’s so much pressure on candidates to pay for everything. I don’t see anyone—I mean, I’ll just be honest, I don’t really see any Presidential candidates putting forward ambitious agendas and saying, ‘We’re not going to try to pay for any of this.’”

In case you doubt that the radical economist really means it, Kelton breezily answers her own questions. “Q: Can we afford a #GreenNewDeal? A: Yes. The federal government can afford to buy whatever is for sale in its own currency.” And, the classic, “Q: Are you saying the government can just “print the money” to pay for new spending? A: Is there any other way?”

How would we pay for it? Just print more money.

Marisa Franco, another Bernie figure on the task force, formerly ran Not1More Deportation, which called for a complete end to deportations, and now wants to abolish ICE.

“We need a goal, and dismantling ICE is a long-term goal that can happen in stages,” she said.

The Biden-Sanders task force may not get Biden to adopt all of Bernie’s most radical policies, but even a compromise with people who want to just print infinite money, let terrorists vote from prison, wipe out manufacturing, provide guaranteed jobs for all, and abolish immigration enforcement would be bad.

A mediocre candidate, Biden needs all the help generating enthusiasm that he can. And the only people generating any enthusiasm among Democrats are the coterie of professional radical leftist activists. The hypocritical fact that Bernie Sanders, who denounces billionaires, yet has brought in radicals backed by Soros, like Bains and Valdes, to create the next just policies of the Democrats, goes unnoticed.

But that’s what it amounts to.

The Democrats claim that they aren’t radical. Yet their unity task force consists of people who literally believe in just printing money, having the federal government employ everyone, and letting serial killers vote. Even Communist dictatorships would question two out of three of these lunatic proposals.

It really says something that the Democrats are going places that even the USSR wouldn’t have gone.

The Democrats have embraced the worst of both worlds, Biden’s charisma and Bernie’s politics, and even in the aftermath of a pandemic, voters will be confronted with a party that wants to take away their health care, make their savings worthless, and make their vote equal to that of a child molester.
And the Democrats may be overestimating how popular any of these terrible ideas will be.

Getting Paid to Borrow? Negative Rates are Negative Indeed