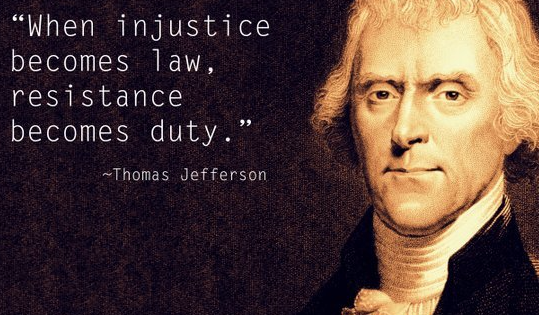 Every day our fellow Americans surprise me by their willingness to submit to the dictates of various levels of state and local governments. By far and away, the lesson of this COVID-19 pandemic has been that when people tell you to listen to experts, you need to question. When Governors of states like New York, California and Michigan get to tell you, “Stay inside or you will be punished,” or, “you are not allowed to enter a store without wearing a mask,” we need to begin to ask, “What country do I live in?”

As Thomas Jefferson so eloquently told us long ago, “If people let the government decide what foods they eat and what medicines they take, their bodies will soon be in as sorry a state as are the souls of those who live under tyranny.”

Now our nation gets to decide. So do we want to establish the right of people to make risk based decisions on their own, or do we want the hand of government to tell us where we can be, with whom, and how close we can stand?

From the beginnings of this outbreak, people were looking to government to “act quickly” and “protect them.” From its foundation, and as codified by the structure of our government in our Constitution, government is not meant to “act quickly.” The Founding Father’s knew that “haste makes waste,” and no truer is that idiom than today where hasty decision making in the name of “saving lives” has led to forty million unemployed, thousands of people under-screened for life-threatening diseases like heart disease and cancer, and incidents of suicide in some counties (up four fold in four weeks in the U.S.).

The devastation wrought on small businesses throughout this nation will be felt for years to come and was caused by a population that was ready to trade in their own freedom to discern their personal risk, for a total lockdown that was supposed to “flatten the curve.” What we now see is questionable success of the lockdowns around the country, measured by lives saved versus lives destroyed–and a plethora of governments grabbing onto power at all costs.

At no time in history have people fought to be enslaved by their government and now should be no different.

Around the world, there are people still under the dictates of tyrants fighting for freedoms that citizens in this country take for granted and have been so willing to hand over in the name of “saving lives.” This pandemic and the response is a warning shot over the bow of liberty that should not be ignored or forgotten by the American populace at large. While some of us might feel that it is the government’s job to “keep us safe,” that is a false choice being presented as a truism. The choice between being protected by “government” or being at risk is a false dichotomy. The real choice is freedom to choose the best course of action for yourself and your family versus being told what to do by the Leviathan (aka “government”).

Government is not all-knowing, nor all-powerful. It is not capable of making subjective risk assessments for each individual in the United States such that we need to put on the shackles they have offered up to us in this lockdown so willingly.

This is a time where Americans everywhere need to begin to challenge narratives, think deeply about what is being ferreted to them as truth, and to take the time to discern for themselves what is best. We have oft heard “freedom is not free.” That statement is one of the truest truism’s ever spoken and repeated. And we are at a historical crossroads in America that is not painted Red or Blue as our politicians would so love for us to believe.

We as a people need to choose to embrace freedom first and push back against draconian shows of force from government wherever they appear. Unmasking tyranny is the responsibility of every American Generation and now, we have the opportunity to tell the political class, “No. You have gone to far, time for us to decide.”

Remember, politicians are just people like you and I. They are imbued with no greater power of discernment and do not have access to special powers that make them better evaluators of risk. Do not give up your freedom to the political class simply because they tell you to. Power corrupts; Absolute Power corrupts absolutely.