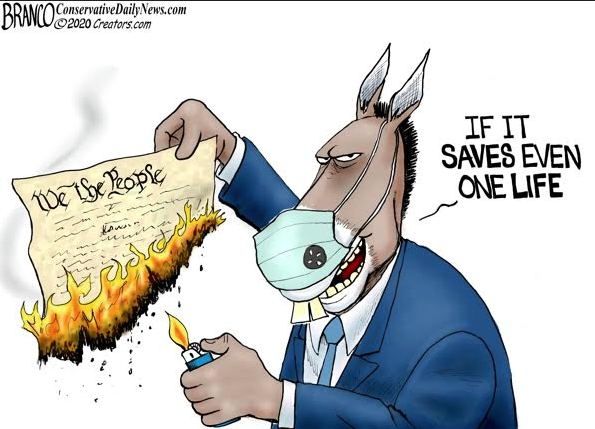 If you’re a home-body, if you don’t care for all those greedy capitalist barbers and landscape workers, and if you think the socialism that failed in the 20th century should be the economic system de choix of the 21st century; then you’re in luck. Nancy Pelosi just released the Democrats’ $3 trillion, phase IV, Covid-relief plan and it’s a true budget-buster.

First, let’s be honest, the $3 trillion doesn’t come from government, it comes from taxpayers; realistically, from future taxpayers who today are our children and grand children.

Second, this biggest-in-human-history spending plan does nothing to open our economy or put people back to work. On the contrary, it rewards people for not going to work, collecting enhanced unemployment benefits, and sitting on the couch eating bon-bons while streaming endless re-runs of “The Punisher.”

And, finally, most of the trillions in this plan go to programs, entitlements, giveaways, and bailouts that have nothing to do with the Chinese Virus. Absolutely nothing!

In fact, one of the plan’s biggest winners are wealthy homeowners who get bigger deductions for their over $1 million mortgage.

At press time, the plan was up to 1800 pages which, by itself, is quite an achievement when you consider the House has been out of session for the better part of 8 weeks, and not one Republican Member of Congress was asked to contribute even a single paragraph to the content. Kind of reminds one of the bad ‘ole days when Obamacare passed without even one Republican vote and Nancy proclaimed, “We have to pass the bill so that you can find out what is in it.” Puh-leeese.

Nearly $1 trillion of the $3 trillion goes to state and local governments with little to NO limitation on how it’s spent. States who have abused their taxpayers and nearly bankrupted their coffers by cutting sweetheart pension deals with public employee unions get more money than those that have hewn to some sense of fiscal integrity.

Likewise, states that have spent billions on providing programs to illegal immigrants qualify for more because those that didn’t aren’t in as dire need.

Need we be reminded, this is our money – or at least our kids’ and grandkids’ money? So what in the hell makes the politicians think it’s ok to spend us and future generations into insolvency?

It’s hilarious at least partly because the real heroes are the ones out there demonstrating against the petty autocrats in city, county, and state governments. They risk arrest or worse as fully armed riot police line the streets trying to intimidate them into submission. Also heroic are the small business owners like the barber in Michigan and the salon owner in Texas who have opened up despite executive dictates. They risk huge fines, jail time, and forced business closures.

Maxine Waters said protesters “should be ashamed of themselves,” for trying to “intimidate our governors to open up everything.”  She also said, “These small businesses that are in direct contact with people … these are people in touch with folks every day, and they’re risking their lives. And we don’t want them opened up.”

Sounds a lot like she’s saying adults shouldn’t be trusted to assess the risks and decide for themselves whether they should enter into private agreements with one another to provide and consume services voluntarily. Sound like America to you? More like the Soviet Union.

Maxine, and all those who agree, are really saying, let’s close the economy till the risk is gone or until we say it’s time to go back to work. That day, of course, will be the day after they win the November election; if they win the election. If not, they’ll argue things should stay closed.

I’ve got news for them. There’s no such thing as a life without risk. Let’s do the best we can. Let’s mitigate the risks and prevent any more deaths as much as we’re able. But let’s be honest. If we don’t open, suicide, spousal abuse, and death by untreated yet preventable illnesses will take more lives than the coronavirus.

But it’s not really about lives, is it?

It’s about politics. Pelosi et al figure if they keep people locked up, living on small handouts from the government, costing livelihoods, and bankrupting small businesses, everyone will eventually blame Trump.

The left says they care about what’s best for you and your family. Really? How is it best for us to be arrested for playing with our kids in a park, cited for surfing off a California beach, harassed by police when our little girl asks a neighbor child to come out and play, jailed for opening our small business so we can feed our families and serve those in our community who want to be served?

Those people are the real heroes in my book. Every one of them exercised their rights safely, responsibly and with the requisite amount of social distancing. Yet, they risk fines, harassment, and even jail time.

I count Elon Musk among those heroes. While almost every other locale where cars are made has opened up, Alameda County’s health officer refused to allow Tesla’s manufacturing plant to open.  10,000 local workers were sidelined. Tesla suffered massive losses while competitors went back to work. The county told him Tesla couldn’t open, but he opened anyway. He personally manned one of the assembly lines. He told the county if they wanted to arrest someone, start with him.  He also threatened to move his plant to Nevada or Texas. Eventually, that message caused the governor to weigh in. Why? Not because any of the politicians involved cared about people, but because they cared about losing the taxes Tesla and all those workers pay.

The Democrats’ $3 trillion pork-barrel cornucopia of bloat they’ve so cynically dubbed the “Heroes” Act is anything but. It’s an insult to real heroes. In fact, it’s insulting to all of us who know how to behave responsibly and safely, but insist on re-gaining the freedom countless Americans have bled and sacrificed to protect.

Are we really going to give that heritage up so Nancy Pelosi, Maxine Waters, and the petty autocrats in Alameda County and around America can decide what’s best for us and for our families?

Pelosi and company are motivated by the desire to win power no matter the cost. Too much is on the line for us and future generations to allow that to happen. I pray we won’t.