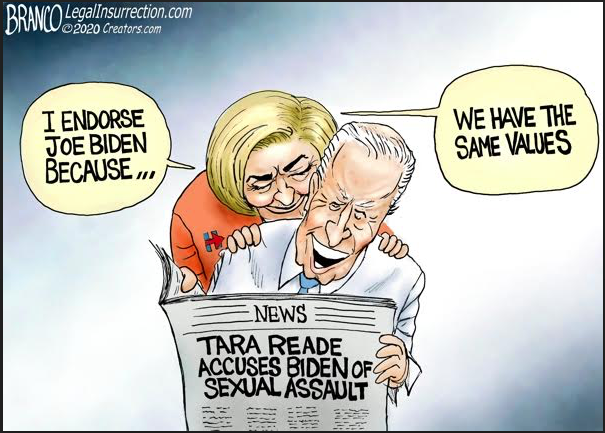 Some people find themselves in difficult circumstances and ask what can I do to change the situation I’m in? Another group tends, instead, to ask, who put me in this situation and how can they be made to change it?

If Joe Biden parroted John Kennedy’s line,“Ask not what your country can do for you, but rather, what you can do for your country,” he’d be strung up by his own party’s left wing base. But then, Biden’s not the slightest bit inclined to suggest the country should come before self interest; unless that is, the self he’s talking about is a Republican.

You’d never hear a Democrat today say “the buck stops here,” as President Truman famously did; unless they were talking about President Trump. To most Democrats, personal responsibility means someone else’s responsibility. The Democrat Party is increasingly energized by a malleable perception of what constitutes truth, honesty, and reality.

When Judge Kavanaugh was mired in Senate confirmation hearings before the Judiciary Committee, EVERY female Democrat Senator charged he was unfit based on allegations by Christine Blasey Ford that he’d committed sexual assault when the two were in high school. It didn’t matter that Ford offered no evidence, no corroboration, and a confused and differing account of the acts she’d accused Kavanaugh of committing. It didn’t matter that those who were supposedly present at the scene had no recollection of the events she described. It didn’t matter that evidence suggests she had political motives for making the charges.

But for Warren, Klobuchar, Harris, and Feinstein evidence was never important. What was important was that an allegation had been made against a conservative judge, conservatives are always evil, so the judge must be guilty. CNN ran over 700 stories about the allegations against Justice Kavanaugh. Even the hint of a sordid rumor earned front page coverage at the Washington Post, and L.A. Times. In the end, a Republican majority in the Senate, unable to find a shred of evidence to corroborate Blasey-Ford’s allegations, confirmed Kavanaugh.

Now Democrats are being forced through the mirror. Joe Biden has been accused of sexual assault when he was a Senator. But this time the charges come from a woman who told others of the assault when it happened. She filed police charges. Her mom called Larry King Live and complained about abuse by a powerful man in the Senate. And the alleged victim is a Democrat and doesn’t appear interested in grinding partisan axes.

Is the party blowing up? Are Democrat women crying for justice? Is the #metoo movement gearing up for a massive take down? Nope. Nada. Nothin.

CBS did a 25 minute interview with Joe and not ONE question on the topic of sexual assault. Likewise, those Judiciary Senators who were lining up to send Brett Kavanaugh to the gallows with zero evidence are as quiet as battered spouses.

Maybe most interesting, we haven’t actually heard from Biden himself; or from his new mouthpiece, his more articulate and less demented wife, Jill. To be fair, Biden isn’t likely to remember something that happened 20 years ago, he may not be able to remember breakfast. Is it a double standard? Well, yeah. Is it hypocrisy? Uh, duh.

Hillary Clinton, who all but called for Kavanaugh’s private parts on a hook, said nothing about the charges against Joe when she endorsed him the other day. But then, she also “stood up for her man” when her own husband was repeatedly accused of sexual misconduct. Sadly, the most interesting thing in Clinton’s endorsement was Biden falling asleep during Hillary’s comments. Nancy Pelosi too endorsed Biden the other day. Pelosi had also called for stringing up Kavanaugh back then. But then was then, and this is now; so she said not one word about the charges against Joe in her endorsement.

Do they think we’re idiots and won’t notice their duplicity? Well, sure. When you have a media establishment on your side that buys ink by the barrel, and i’s and o’s by the googleplex, you can pretty much write – or change – history on the fly.

The very same people who are so fast to attack Trump for disregarding the truth anytime he exaggerates, thinks out loud, or expresses a positive perspective; have completely discarded truth as irrelevant to their political machinations.

Remember Joe Biden attacking Trump as xenophobic, racist, and anti-scientific for closing travel with China back on January 31? But then, two months later, Biden reversed his position and supported banning travel as though he’d never opposed it. He even criticized Trump for not acting sooner. To Democrats the truth is never a hard and fast reality fixed irrefutably in space and time. Rather, truth is malleable and should always be alterable as the situation demands.

Reason is the enemy. Passion and emotion are the only acceptable response to any situation. That’s how you divide, excite, recruit, and mobilize. It’s also why can’t believe anything Democrat leaders say.

Unfortunately, we conservatives don’t have the luxury of redefining truth however it suits. Still, if we keep speaking truth into the political marketplace, it must eventually strike cords among the hearts of voters. Right? I think so. At least, that’s the truth I’ll believe until it changes.

Trump Was Right About China All Along

Barak Lurie: The Math Of COVID-19