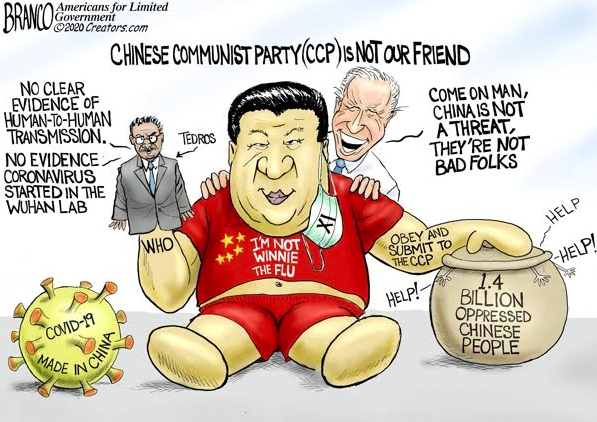 At least since the civil war, it’s likely our country has never faced a greater threat than the one we face now with China. Hyperbole? Not so fast.

The Communist government in China makes no secret or no apology for wanting to be number one in the world both militarily and financially. Their currency is officially the Renminbi, what we more commonly know as the Yuan. They want it to replace the dollar as the world’s dominant reserve currency.

That’s not so scary by itself. What’s scary is they intend to make it happen by whatever means necessary — whether by economic intimidation, bribery, or military force.

Economically, they’ve built the 2nd biggest economy in the world based on cheap labor and foreigners looking to benefit from it.

They’ve used that wealth only partly to provide for their own people. Mostly, they’ve used it to make cheap loans to other countries plunging foreign governments into steep debt and buying off the leaders of those countries with graft and payoffs.

China’s military is also 2nd in the world, but they’re gaining fast with huge spending on news ships, planes, armaments, and training.

Presidents before Trump knew all this. They did nothing about it. Instead China’s had their way, promoting trade policies that allowed the theft of American innovation and domination over supply chains essential to American security.

Unlike his predecessors, President Trump has worked since taking office to fix the problem. It hasn’t been easy. He’s had to take on an establishment that’s spent the last 50 years creating the problem.

The Wuhan Virus has brought home just how dangerous that problem is. Past trade agreements allowed China to dominate the manufacturing of our most critically important pharmaceuticals … technological components … and strategic materials.

And what did we get in return? We got cheap electronics and a nearly unlimited number of Chinese students in our universities learning from our most knowledgeable professors, researching with some of our most sensitive scientific, technological, and medical subjects.

It’s hard to blame the communist Chinese government. They’re doing what communist governments have always done. Imposed their will on others. The real blame lies with our own leaders, especially former President Obama and his Administration. Hillary Clinton, his Secretary of State, promoted Obama’s hands-off China policy. And his Vice President, Joe Biden, was the Obama Administration’s point man for China.

Thank goodness for Trump. While the Trump Administration was working to provide America’s health care system with the medicines we needed to fight the Chinese Virus, China was threatening to cut us off if we didn’t tow their line. We didn’t and they didn’t, but that was only because Trump threatened to kill restore tariffs on Chinese products.

For more than a decade, China has been building military facilities on islands in the South China Sea illegally, and taking illegal possession of large parts of the region in a direct challenge to neighbors like Vietnam, Taiwan, and Indonesia who are taking business away from them.

America’s biggest ally in the region is Australia. They’re very concerned about the new military bases China is building in the South China Sea. Other countries in the neighborhood; Vietnam, The Philippines, Malaysia and Brunei all have competing interests. That’s nothing new, but latelytensions are growing as China militarizes as much of the South China Sea as they can.

China’s neighbors are understandably concerned about China’s role in spreading a global pandemic and bringing the world to its knees without firing a shot. They’re well acquainted with the deceit, treachery, and evil of the Chinese Communist government.  It’s no surprise to them that China lied about the Wuhan Virus – its existence, its source, and its transmissibility. They’re likewise not surprised China would ban domestic travel outside of Wuhan, but allow travelers in Wuhan to go anywhere else in the world they wanted.

What they don’t know, and we don’t know, is whether the Chinese Virus was an accident or whether they intended to use it as a weapon to weaken the rest of the world and extend either their economic influence or establish military control. If it’s the latter, it didn’t work — not yet anyway. Most of the world seems appalled by the harm China’s done.

Sadly, Joe Biden and the leaders of the Democrat Party have not yet learned these lessons. Biden and his allies criticized Trump for banning travel from China. They allege Trump is a racist because he calls the virus, which originated from Wuhan, the Wuhan Virus. And they repeatedly tried to stop Trump’s efforts to prevent China taking unfair advantage of U.S. farmers and U.S. businesses.

Now, Senator Kamala Harris has even introduced a resolution that says anyone calling the novel coronavirus the Wuhan or Chinese Virus is guilty of a hate crime. What she and all the other Democrats don’t want us to understand is that this has nothing to do with the brave people of China who are quickly growing sick of their own leaders, and everything to do with a criminal enterprise known as the Chinese Communist Party.

The truth is the people of China know better than progressives in America who think China is our friend. Like the Obama Administration before them, they’re the real problem. They promise to undo the progress Trump has made in reigning in China’s power and influence, and in encouraging businesses to come home to America.

After China’s possible sneak attack with the Wuhan Virus, much of the rest of the world sees China for the evil they are – including a growing number of their own people. We can only hope most American voters agree–or come November, we’ll find ourselves right back where we started. And China will be on the march again.

Biden Calls Attention to His Own Shortcomings In Criticisms of Trump