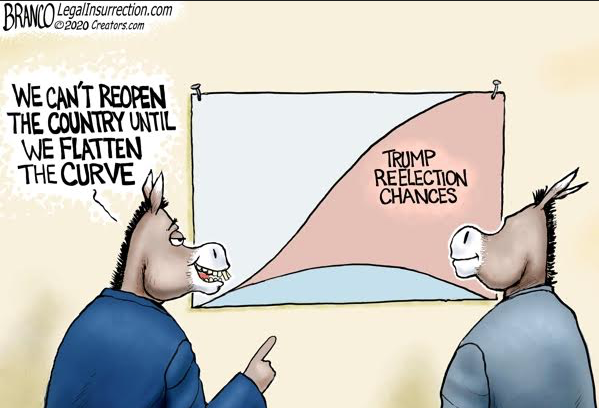 How does it make sense to keep the economy closed while 30 million plus Americans are out of work?  Or pay many of those workers $2,400 more per month in unemployment benefits than they’d make if they were working?  Or extend those enhanced benefits through the rest of 2020?

These are just a few of the many ways the new $3 trillion spending bill by House Democrats breaks the U.S. bank.

There’s only one reason for these policies that make any kind of sense: Democrats don’t want Americans to go back to work. They believe that if they reward unemployment by paying the unemployed not to go back to work, then a very large number of them will stay home, drink beer, and brush up on Mario Kart.

How desperate do you have to be to make millions suffer just to win an election?

How sick do you have to be to enjoy the misery of so many because it means political power for you?

And at first, they were successful. They won control of the House in the mid-term 2018 elections. But then, the Mueller investigation turned up not one wit of collusion and things started falling apart.  It looked like Americans were starting to get wise to their double standards, deceit, and desperation.

But then the Chinese came to their rescue, letting lose the Wuhan Virus that has infected millions around the globe and killed hundreds of thousands.

Of course, Trump took fast action to prevent the virus from coming to the U.S. First, he prohibited travel from China for which Democrats called him a xenophobe and a racist.

Then, he closed much of the economy, put in place multiple travel bans, and marshaled the best and brightest to limit the spread, find treatments and develop a vaccine.

Democrat Governors did their part too. Forbidding people to gather for church, community meetings, or protests. Closing businesses like restaurants, salons, and manufacturing plants. Prohibiting families from going to parks, sitting on the beach, or even gardening in their own yards. Signing executive orders that threaten those who refuse to go along with huge fines or even jail time.

Now that 30 plus million Americans are unemployed, food is getting more scarce, social distancing is the norm, and people face threat of arrest if they go to a park or try to get a haircut; Democrats believe they’ve finally put Biden in a position to win this November.  That’s the plan anyway.

It’s interesting the people local officials consider essential. First, of course, is them. They get to stay in power, collect their taxpayer funded pay checks, and enforce their petty autocracy.

Next, are the liquor stores and pot shops. Got to keep people self-medicated in this time of loneliness, isolation, and stress.

Grocery stores and pharmacies are certainly essential. In some states, the big box stores like Walmart and Target are still open, even though sometimes areas of the store are roped off for fear customers will buy gardening supplies or American flags.

In some states, officials require stores to make aisles one-way to preserve adequate distance between customers. They never considered that now you have to spend twice as long in the store negotiating the aisles. Older people have a hard time walking twice as far. Speaking from personal experience, I can tell you that in Connecticut if the aisles were streets and grocery carts were cars, we’d have dead bodies piling up from the chaos.

I also wonder when it became okay to consider some people essential and others non-essential — as though some people have greater value than others.

The idea, of course, is for us to get really mad at Donald Trump just in time for the general election.  It may be cynical and unethical, but it could be an effective campaign strategy. Kill a couple hundred thousand so we are all a little more nervous and frightened. Kill an economy that was just 90 days ago the greatest in the history of the world — and the biggest reason to re-elect Trump. Make our lives so miserable that we will vote for anyone who promises to return normalcy. (You can bet your last dollar, Joe is practicing those promises day and night.) Forget the pesky details, just trust him to do it.  And trust Alexandria Ocasio-Cortez and Bernie Sanders who he says are now helping to steer his campaign to help.

What Biden and the Democrats pulling his strings won’t tell us is that all the money we’ve spent on fighting the coronavirus and the subsequent economic fall-out will have to be repaid somehow.  It’s now around $6 trillion.  So once they take office, we can be sure the Trump tax cuts will be repealed.  They’ll pass even more tax increases, probably worse than those Warren and Sanders were promising in the primaries. Major regulations will be back because they generate fees and fines. Our power bills will skyrocket as we ditch domestic energy sources like coal, fracking, and oil for more expensive Green New Deal alternatives. We will also rejoin the Paris Climate Accord, adding even higher costs to meet our energy needs. Expect as well additional contributions to the WHO for all the trouble we’ve put them through with Trump’s mentioning their shilling for China. And, of course, Iran will demand a few plane loads of cash to make up for Trump insulting them as well.

My crystal ball doesn’t seem to be working right now so I can’t tell you when it will all be over. But I think it a pretty safe prediction Democrats will try to drag out the pain until the November elections.

I can also tell you absolutely that no one has worked harder or more sincerely for the American people than Donald Trump. Hopefully, he’ll be able to do in a few months what it took him a year or so to accomplish earlier in his term and get our economy roaring back before November.

It wouldn’t hurt if Attorney General Barr continued to expose the corruption in the Obama-Biden Administration, and put some of those crooks in jail.

What we can really hope is that Americans see how Democrats are now trying to profit from the misery of their fellow Americans. If they do, Trump won’t have any trouble getting the time he needs to fix the mess Democrats want so desperately to create.