Silicon Valley was both the epicenter of one of the country’s first Wuhan Virus outbreaks, hosting the 2nd case in California and the 7th in the country, and of the technological tools of the lockdown, from contact tracing and drone tracking, to the virtualization of everything from education to socialization.

The tech industry represents the apex of both globalization and repression. On its massive campuses, foreign workers likely played a role in spreading the virus even as their industry became the public face of fighting the virus by unleashing a new wave of censorship and surveillance against Americans.

Before long, Facebook’s Mark Zuckerberg could be seen warning that the social media giant would delete any protests against the lockdown, YouTube’s Susan Wojcicki declaring that any videos that contradicted WHO would be deleted, and Microsoft’s Bill Gates speculating about immunity passports. 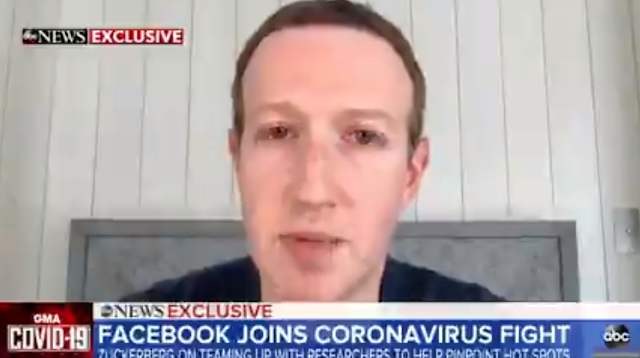 And Google and Apple came together to build a contact tracing system that would track everyone.

Silicon Valley’s titans and monopolies want to be the heroes of this pandemic, but the only things they have to offer are the totalitarian tools of surveillance that have destroyed public trust in the industry.

Santa Clara County has, as of this writing, experienced nearly 100 deaths. A Stanford study last month speculated that there were 48,000 infected. Even as Silicon Valley has helped spread the Wuhan Virus, it has its own form of immunity. Barbers can’t work online, but interface designers can. Tech industry stocks may have taken a beating, but unlike countless small businesses, they will bounce back.

And the virus culture of lockdowns and social distancing, wholesale civil rights violations and the elimination of privacy is trending the tech industry’s way. The massive databases of the huge monopolies are making it a lot easier for the authorities to track lockdown scofflaws. The creepy visions of an automated posthuman society have become the default response to the virus across America.

Social distancing is completing Silicon Valley’s vision of a world of isolated people who can only connect to each other through the mediation of their services. The brave new world in which Facebook is family, Twitter is politics, and Google is reality is a lot closer than ever before in the new Safer at Home society.

While the tech giants have much to say about what people can and can’t do, they have little to say about the origins of the Wuhan Virus and how Santa Clara County ended up with its own pandemic.

“China did a lot of things right at the beginning, like any country where a virus first shows up,” Bill Gates told CNN. In a Washington Post editorial, he described Microsoft China as a model of whose “roughly 6,200 employees”, “about half are now coming in to work.”

China is more than the tech industry’s partner: it’s the future. The social credit system and surveillance society, the skyscrapers and robotics, the high-speed rail and the massive factories are more than just TED talks, they’re a grim chrome-plated reality. The censorship, surveillance, and propaganda deployed by Silicon Valley in response to the pandemic was a Chinese solution privatized in an American fashion.

Gates, like other Silicon Valley technocrats, has to keep spreading the myth of Chinese expertise in battling the Wuhan Virus, not just because Microsoft needs the approval of the Communists, but because the Peeps are to tech industry technocrats what the Soviet Union with its collective farms and planned economy was to the New York and Chicago academics of nine decades ago. The future.

That’s why Democrats have spent the last generation mumbling that we should be more like China. Perhaps not the forced abortions, organ trafficking, or camps, but they do make the trains run on time. And California can’t even manage to build a train. It’s no wonder that Silicon Valley looks westward even as it uses the pandemic to unleash technodystopian solutions worthy of three William Gibson novels.

The one thing that China’s Xi and Gates’ corporate culture in Redmond could agree on is that people are stupid and need to be told what to do. Most will never do what they’re supposed to unless they’re manipulated, prodded, and even bullied into doing what the masters of the universe think they should.

That’s exactly why the tech industry’s monopolies have created a toxic culture that has infected our culture, poisoned our politics, and is depriving us of our civil rights. Its number dot zero web divides and conquers, fragmenting our society along algorithmic lines, creating crises for its own profit, and then brutally stamping on the consequent conflicts with its unseen machinery of surveillance and censorship.

Silicon Valley isn’t fixing the pandemic with its control freak responses, instead it’s worsening it. The tech industry might have learned from its Chinese cohorts that censorship doesn’t inspire confidence, it creates distrust, manufacturing a consensus by silencing everyone who disagrees spreads paranoia.

In a dissentless culture, everyone echoes the propaganda, but no one really trusts or believes anything.

Control, surveillance, and suppression don’t solve problems. They just convince members of the elite that the problem is under control. That’s what the Communist elite accomplished in China. Their lies, intimidation, and likely killings aren’t fooling the people in the affected areas, just their bosses.

That’s also how Silicon Valley works. Instead of proverbs from Mao’s Little Red Book, there are buzzwords. But they all serve the same function, ghost cities and vaporware, phantom industries and fake economics, entire Potemkin realities built on lies that fall apart when you pull back the curtain.

Who really needs this level of control and deceit? Thieves and liars. The bigger the con, the harder you have to grip the tiger so it doesn’t eat you. That’s as true in China as it is in California.

Communist China’s dirty little secret is that it doesn’t work. Its fake economy is built on massive thievery and fraud. If the United States ever stopped buying its own stolen property back from the Commies, along with the rest of the world, the whole thing would collapse as badly as Mao’s sparrow hunt.

American technocrats who insist that we imitate China are falling for a fraud. And every time the Democrats try to sincerely imitate a fraud, the whole thing fails miserably on them like all their high-speed rail projects that never get off the ground and only do one thing at high speed, spend money.

High-speed rail, like an internet run by a handful of monopolies, seems very appealing to control freaks. But the American model is two cars in every garage and a decentralized web that has room for everyone. The pandemic solution championed by American technocrats envisions one lockdown for everyone and one token ring to bind them all. People, both Commies and dot commies often assume, are interchangeable. What holds true in New York will be just as true in South Carolina or Wyoming.

The Wuhan Virus is a wake-up call about globalization and centralization. America isn’t just a gear in a global machine, and states aren’t interchangeable parts in a national puzzle. Americans are as individualistic as their communities. We’re not glowing dots to be herded by drones, barked at by public safety announcements, and lied to for our own good by dot com and gov public-private partnerships.

The tech industry’s monopolies have built a dystopian culture that has divided neighbors, families and a nation. It’s time to break up the dystopia, end the monopolies, and rebuild the American community.