On Monday, April 21st, members of National Nurses United (NNU), a radical union that advocates for socialized medicine, gathered outside the White House to protest against President Trump. 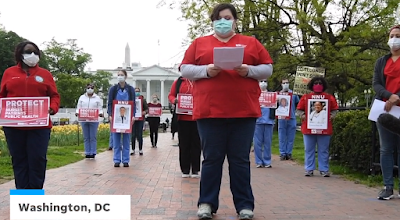 Video of the protest was carried on Facebook Live by the same dot com monopoly which had banned ‘Reopen’ protests as being harmful. After the rally, protesters clumped together with reporters, and there was no social distancing in sight. Despite that Facebook did not take down the NUN page.

There wasn’t even a hint of a suggestion that a protest was inappropriate under lockdown. Especially by a group that is at far more risk of spreading the virus than any of the shuttered small businesses.

The White House protest was one of multiple NNU protests around the country, some thinly disguised as ‘vigils’ or concerns over PPE, but ultimately a larger push for a socialized medicine takeover.

But it wasn’t just protests by health care workers that benefited from a political double standard.

In the same weeks as the ‘Reopen’ protests against state lockdowns and for reopening businesses were taking place, a parallel series of protests against President Trump were also happening across America.

Police cracked down on the ‘reopen’ protests, arresting an organizer in New Jersey, while the media condemned them, spun conspiracy theories trying to tie them to members of the Trump administration, and falsely accused protesters of causing an increase in coronavirus in Kentucky.

Blue state governments, dot com overlords, and the media all warned that protesting in the age of the coronavirus was dangerous and illegal. Even if the protesters were in cars or maintaining social distance.

But meanwhile Refuse Fascism, a radical leftist organization created by members of the Revolutionary Communist Party, was holding its own anti-Trump protests with no interference from the authorities.

And no negative coverage from the media.

While New Jersey State cops had arrested the organizer of the ‘Reopen’ protest in Trenton, the Philadelphia Inquirer described members of Refuse Fascism Philly, at least one of them outfitted in ‘Handmaid’ garb, driving to dump fake body bags at the Trump National Golf Club in New Jersey while “police officers wearing respirators monitored the peaceful demonstration” and made no arrests.

The paper, which has blasted the “reopen’ protests, offered positive coverage of the anti-Trump protest.

The Communist organization’s Facebook site, including links to its protest and photos from the event, is still standing. The social media giant has refused to take it down the way it has ‘Reopen’ sites.

While Facebook has claimed that it views protests during the coronavirus lockdown era as illegal, it is treating protests against the lockdown where conservatives wave American flags very differently than it does protests against President Trump by Communist activists. The patriots are banned from Facebook while the Communists are welcome. The political bias is unmistakable and the agenda is all too clear.

The local CBS affiliate in Chicago covered a protest by Refuse Fascism on April 18th and offered no criticism of the irresponsible behavior of going out to dump body bags outside a Trump building at a time when everyone is being told to stay home to avoid spreading the virus.

SFBay covered both the reopen protests and a Refuse Fascism protest in front of the San Francisco Federal Building, condemning the former, while writing positively about the latter. Bloomberg whitewashed the Communists protesters as “critics of Trump’s slow response to the crisis”.

There was no media condemnation of the Refuse Fascism protests, even when they took place at Trump Tower or in Times Square in New York City, the city hardest hit by the pandemic. Or, as the Communist organization put it, “In the midst of the #Covid-19 virus, Refuse Fascism did this action in Times Square.”

The sight of protesters dumping body bags outside Trump properties and federal buildings was an effective piece of street theater. What is curious is how only a handful of media outlets covered it.

Much of the country has been locked down. Countless Americans have lost their jobs and their hope.

The media is well aware that the sight of resistance hipsters parading around with body bags and protest signs might be infuriating at a time when the country is going through a national trauma. And so the media has made a selective choice not to cover protests that it knows quite well are taking place.

This coverup has been conducted at the same time as it has hatefully covered the Reopen rallies.

The smears of the Reopen rallies serve the media’s political agenda, while covering the Refuse Fascism rallies would not. The media doesn’t oppose the Communist rallies, it just understands that even the people who repeat back everything the media tells them might pick up on the hypocrisy of accusing Reopen protesters of spreading coronavirus and endangering their states while cheering the Commies.

While the media has played down lefty protests in this country, it has been more enthusiastic abroad.

Israel’s Netanyahu is a longtime media hate object and the media supports the protests against him. And it’s safe to promote protests in Israel that won’t affect or infuriate Americans under lockdown.

The double standard on anti-Trump and anti-lockdown protests by the media, by Facebook, and by state authorities is evidence of bias, of discrimination, and of selectively censoring political speech.

New Jersey arrested a Reopen protest organizer while letting Communists protest as they liked. Her real crime was ‘protesting while conservative’ under Governor Murphy’s post-Bill of Rights regime.

The pandemic is being used as a pretext by blue governments and by Facebook to silence conservatives.

If leaving the house to go to church or to play catch is a public health hazard, why have the authorities allowed the National Nurses United and Refuse Fascism protests to continue without tickets or fines?

If a protesting is a public health threat, as Facebook boss Mark Zuckerberg insists, why is his platform continuing to host videos of Refuse Fascism and National Nurses United protesting in public?

The wholesale suppression of the First Amendment by governments and dot com monopolies would be bad enough. But the suppression is selective. As it always has been long before the pandemic arrived.

If you’re protesting against President Trump, the authorities won’t touch you. But if you gather to demand the right to reopen your small business, they will fine you and even arrest you.

And Facebook will delete any attempt to organize peaceful protests by small business owners waving American flags, while hosting protest content from Communists who want to destroy America.

These are not pandemic precautions. The crackdown on the Reopen rallies is political persecution.

It is up to Attorney General Barr and the DOJ to stand up for the civil rights of the people being arrested, fined, threatened, and censored, not because of the coronavirus, but because they are conservatives.

Georgia is Open For Business: Thank You, Governor Brian Kemp!