Early on Easter morning on Clifford Ave, 3 people were shot. 2 of them recovered, but 1 did not.

The triple shooting in Rochester was one of a series of brutal gangland assaults in the upstate New York metropolitan area. Justin ‘Tookie’ McMillan’s shooting by Dvontea Alexander marked the eighth murder in Rochester. Tookie’s social media photos showed him flashing stacks of hundred-dollar bills and gang signals. Dvontea Alexander, his alleged shooter, appeared to have a previous criminal record.

Dvontea was quickly arrested and charged. As with the aftermath of any gang-related shooting, social media quickly filled up with local comments alternately mourning or celebrating Tookie’s death.

After Tookie’s murder, a large crowd gathered on Clifford Ave to pay tribute to the dead man. Candles were lit, balloons were inflated, and empty bottles of Remy Martin cognac lined the sidewalk outside the corner convenience store. 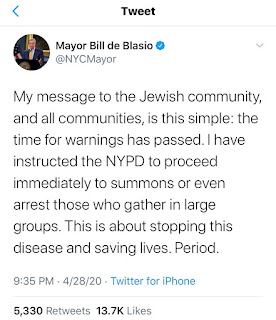 Vigils after shootings in Rochester aren’t unusual. And even in the age of the Wuhan Virus, the vigils were going on. But the Tookie vigil drew over 200 people and attracted the attention of the authorities.

Mayor Lovely Warren said that she drove by the vigil and decided to allow it to continue.

“Knowing our community and knowing the passion and the need to mourn we decided that we were going to allow the community to come together yesterday to mourn the life that was lost,” she opined. “Yesterday that’s what this community needed and that is what we allowed to happen because it was done in a peaceful way and it was safe and we were able to keep eyes on it.”

Police Chief La’Ron Singletary argued that, “Force could’ve been used to remove the crowd. Officers would’ve certainly liked to use force and increase the likelihood of an officer contracting COVID, if someone was a carrier of COVID in that crowd.”

Both Lovely and La’Ron were essentially arguing that people needed an outlet for their grief, and that trying to break up the vigil would have led to violence. Meanwhile, Lovely’s administration had been closing down playgrounds and removing basketball rims to keep people from gathering outside.

Monroe County Executive Adam Bello, a Democrat, condemned “incendiary” rhetoric about the vigil. Meanwhile he had been telling local residents to wear masks, threatening to close public parks, and complaining that too many people were going shopping. “We need to think about why we’re going to those stores, and how many people from each household is going to those stores,” he scolded.

At the end of that same month, Rabbi Chaim Mertz passed away in Brooklyn from the Wuhan Virus at the age of 73. Rabbi Mertz was the leader of the Tola’as Yaakov Chassidic movement which took its name, “Worm of Jacob”, from Isaiah 41:14, which reads, ‘Fear not, O worm of Jacob, the numberer of Israel; “I have helped you,” says the Lord, and your redeemer, the Holy One of Israel.'”

Rabbi Mertz’s father had survived the Holocaust, losing a wife and 5 children. After remarrying, he fled Communist tyranny in Hungary in the fifties, and came to this country where he founded a small obscure synagogue in the Williamsburg area of Brooklyn. True to the name of their movement, both father and son were known as pious and humble religious leaders who would try to blend into crowds.

While the Tola’as Yaakov movement was tiny and Rabbi Mertz’s synagogue rarely had more than two dozen congregants, the Mertz family was loved by its fellow Hungarian Chassidic Satmar dynasty which is also based out of Williamsburg. While the Mertz family had been humbly expecting a small turnout and had arranged with the NYPD to allow well-wishers to pay their respects, a large number of Satmar Chassidim also arrived to pay tribute to a man whom their religious leader had greatly respected.

The Mertz family had planned for a socially distanced procession with people wearing masks and walking down a closed street at the proper lengths from each other. Community groups tried to maintain order, handing out masks to new arrivals, and urging them to keep their distance. The larger than expected crowd led the NYPD to order everyone to disperse, but without a proper sense of direction, people didn’t know where to go and began to mill around up against the police barricades.

That was when Mayor Bill de Blasio arrived on the scene, later claiming that he needed to be there personally to break up the event. “I went there myself to ensure the crowd was dispersed,” he tweeted.

De Blasio’s claim was false. The NYPD and the funeral organizers had already made the decision to shut down the event. If the funeral was a potential infection site that was risking lives, as Bill de Blasio claimed, why did he need to go there in person and expose his police security detail to the virus?

What Mayor Bill de Blasio actually wanted was to show up for a photo op. Some have theorized that the entire arrangement had been a bait and switch in which the Mayor’s Office had approved a funeral only as a platform for the politician to arrive in a huff and declare that it was shut down.

Even otherwise friendly media outlets had been critical of Bill de Blasio’s failures to prepare, warn, and take action against the virus.

The De Blasio administration had dismissed the idea that the virus was contagious on public transportation and had urged New Yorkers to go and participate in a parade in Chinatown. It had made no preparations to deal with the pandemic until it was too late. Bill de Blasio had made a point of casually violating safety guidelines while endangering the health of his own police detail.

And, like many traditional bigots, he had now found Orthodox Jews to be a convenient minority to scapegoat for his own failures while butching up and playing the tough guy.

It was classic anti-Semitism.

What happened next only reinforced that theory as the Democrat, who had badly failed at fighting the virus, took to social media to threaten the “Jewish community” that the “the time for warnings has passed”. “I have instructed the NYPD to proceed immediately to summons or even arrest those who gather in large groups,” he claimed. And the summons blitz he threatened did indeed follow.

There had been only a minimal police presence in Orthodox Jewish neighborhoods in Brooklyn when a rash of anti-Semitic hate crimes was taking place, but now an army of cops descended on Williamsburg, broke into a synagogue where religious scholars were studying their sacred texts, more than 6 feet apart, and began issuing summonses to anyone who was walking down the street while Chassidic.

Even though New York City’s mask rule only requires wearing one when you’re unable to be more than 6 feet from another person, summonses were being handed out to people just walking down the street at a reasonable distance. The only obvious distinguishing mark of those being ticketed was their religious identity.

The crackdown was underway.

It might have once been unthinkable that the mayor of a major American city could publicly threaten a religious minority and then lead an obvious discriminatory campaign targeting that group, while using them as scapegoats for his own incompetence, but the past few months have ushered in formerly unthinkable violations of the Bill of Rights as a new norm.

In a political environment where people can be arrested for leaving the house, for playing catch, or pushing their kids on a swing, where governors and law enforcement officers can casually dismiss the Bill of Rights as irrelevant to their jobs, a radical politico with a history in an anti-Semitic Marxist movement can act out his worst ideological impulses to boost his future political prospects.

Crack down on enough Jews and maybe Bill de Blasio will do better in the Dem primaries in 2024.

Anti-Semitism, like so many other social ills, is a byproduct of a totalitarian society whose fears and hatreds are stronger than its principles and convictions. It is no accident that those who want us to be most afraid are targeting churches and synagogues to take away that which gives us hope and faith.

The tale of two funerals reveals the fallacies of lockdown culture. We are not all in this together. That was always a lie. The governors whose families are in their vacation homes in different states are not in this with us. Different communities are treated differently in the lockdown as in daily life.

The differences between Mayor Lovely Warren’s tolerant response to the vigil in Rochester and Mayor Bill de Blasio’s crackdown on a Chassidic funeral in Brooklyn is unfair and it’s also human nature.

The alternative to everyone possessing the same set of objective rights is to be ruled by the subjective biases of everyone more powerful than us. But that is exactly what happens when an emergency is used to override our rights and that covers a multitude of abuses from corruption to religious persecution.

People of all races and religions should be able to mourn their dead. There is no culture so savage that it has uprooted this fundamental human norm. Even elephants bury their dead. How can humans do less? Is it possible for people to pray, to mourn their dead, and earn a living in a sensible manner?

It is. And we ourselves can best decide what that is right for our communities and ourselves.

A handful of politicians have chosen to treat their entire states as untrustworthy non-essential people who ought to be locked up in their homes and scolded daily for not cowering far enough under their tables and beds. That’s as un-American as Bill de Blasio’s misconduct.

If we don’t, the final funeral will be for our freedoms.

Corona and the Serpent's Lie to Eve