When the Alliance Defending Freedom helped a local church sue Chattanooga for banning its drive-in prayer service, the article in the Chattanooga Times Free Press repeated the Southern Poverty Law Center’s smear of the religious civil rights organization as a hate group. But the reporter who wrote the article was no ordinary employee. Wyatt Massey was one of the 225 members of Report for America’s ‘corps’ who are planted in local newsrooms to promote the radical agendas of the left-wing group.

“Will Trump’s new public charge rule close door on immigrants’ hope of the American dream?” Manuel Obed asked at The Dallas News. Obed has been with the RFA ‘corps’ pushing out pro-illegal stories.

In 1976, William Garrison, along with two other thugs, broke into a home in Detroit, killed a man, and shot two other people. When Garrison recently died of coronavirus, the Detroit Free Press article treating him like a victim was written by Angie Jackson, another ‘corps’ member. Jackson’s beat, according to Report for America, is “formerly incarcerated citizens re-entering the community.” 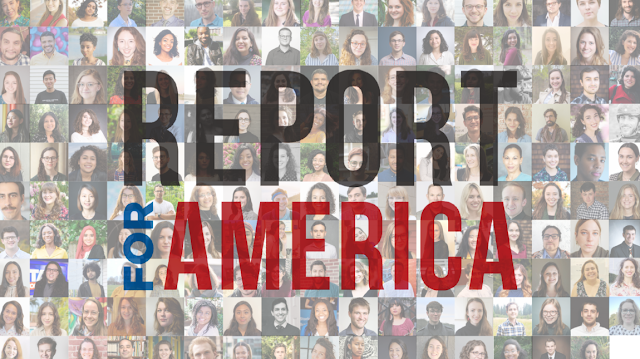 While Report for America claims that it’s funding local journalism, what it’s actually doing is embedding social justice activists in local papers who are often targeted at pursuing a narrow political agenda.

Leah Willingham was placed at the Associated Press to focus on the “Mississippi state legislature” and its “actions affecting the poor”, Kyeland Jackson was planted in Twin Cities Public Television to cover the “causes, effects and solutions to racial disparities in Minnesota”, Shivani Patel was dispatched to the Ventura County Star to write about “equity in education in the county”, and Devna Bose was shoved into The Charlotte Observer to report on “poor and minority communities in prosperous Charlotte”.

The agenda is often built into the very description of what Report for America’s activists are doing. Or at least it is to Report for America’s donors who are told what the activists they fund are doing. But ordinary readers of local publications and stations are often not told that what they’re reading isn’t real local reporting: it’s the work of activists funded by a national organization and its wealthy backers.

The lack of transparency is dishonest, unethical, and a new low even in the era of fake news.

The left-wing foundations and donors aren’t funding journalism, they’re buying coverage that fits their agenda. And local newspapers are renting out their newsrooms to wealthy left-wing organizations. Beyond the usual radical foundations like the Ford Foundation, the MacArthur Foundation, and the Knight Foundation, the Facebook Journalism Project has poured millions of dollars into RFA.

“Local journalists are providing us with an extraordinary public service 24 hours a day,” Facebook’s Campbell Brown, falsely claimed. “We all need to understand how the virus is impacting the communities where we live—it’s vital information that’s helping keep our friends and families safe, and we’re proud to support Report for America in this effort.”

Report for America’s focus on identity politics and its base of white lefties parachuting in to produce agitprop sometimes results ludicrous pairings like Samuel Bojarski, a Jewish freelance writer from Pittsburgh, being dumped into The Haitian Times to cover the Haitian community. But mostly its activists are young women, some have worked for lefty organizations, and their politics are predictable.

Facebook has often been accused of spreading fake news. Here it, along with the Google News Initiative, which kicked in $400,000, is literally financing a fake news project which pays half the salaries of the reporters it embeds in local newsrooms, while its own funding comes from wealthy left-wing groups.

Most newspapers are happy with the arrangement: it’s the readers who are cheated.

Facebook has claimed that its Journalism Project will fight fake news, instead it’s funding it. If the social media monopoly giant wanted to support journalism, it could do so in any number of ways. By financing Report for America’s activism, it’s helping fund papers on the condition that they run propaganda.

Not only is Facebook financing a political agenda, its funding of RFA represents an even deeper conflict of interest when the embedded activists from the left-wing group start functioning as fact checkers. The social media monopoly has used media fact checkers in an on and off way to censor conservatives.

The current RFA ‘corps’ class embedded Clara Hendrickson, of the left-wing Brookings Institute think tank, into the Detroit Free Press, where she’s tasked with ‘fact checking’ Michigan politicians for the paper and for the PolitiFact site.

The conflicts of interest here are so convoluted that they require their own flow chart.

A research analyst for a partisan think tank is funded by a left-wing organization to ‘fact check’ political candidates for a major newspaper which has already accepted two other embedded RFA activists. PolitiFact then intends to treat her attacks on Republicans as ‘facts’, and Facebook, which is funding the whole shebang, will censor conservatives on social media based on her partisan hit pieces.

Fact checking already consists of partisan attacks by the media under the guise of objectivity. RFA is helping the media shelve even the thinnest pretenses of objectivity and ethics in pursuit of its goals.

Or, as Hendrickson tweeted, “I’m thrilled to say I’ll be joining @freep in partnership with @PolitiFact as a @report4america corps member, fact-checking federal, state and local candidates in a key swing state ahead of the 2020 election.” Is ‘fact checking’ federal candidates any more important in a swing state? It is if your goal isn’t searching for the truth, but helping Joe Biden win the White House.

Like its activist, RFA zeroed in on the ‘key swing state’ element to justify Hendrickson’s role, explaining that, “Michigan’s need for fact-checking is particularly critical because it has been identified as one of only four true “swing” states in the 2020 presidential election… additionally, there is a Senate race in Michigan in 2020 that is widely considered a toss-up.” This isn’t journalism, it’s an election strategy.

Or, as PolitiFact Editor Angie Drobnic Holan noted in her gushing statement about the ‘fact checking’ site’s partnership with a left-wing group, “We intend to fact-check the messaging of the presidential election, as well as the race for U.S. Senate.” Actual journalists check their own facts. Activists redefine activism, partisan messaging, and hit pieces as fact checking because it still fools some people.

Here’s a sample of Clara’s commitment to truth and facts, “Spoiler: Trump’s racist rhetoric has encouraged violence in America.”

The only thing the PolitiFact partnership demonstrates is that ‘fact checkers’ are just as eager to rent out their coverage to wealthy donors as newspapers as long as it’s for the same left-wing causes.

Brokering complicated entanglements between wealthy lefty donors, lefty non-profits, and newspapers into unethical conflicts of interest is one of the few things that Report for America does well.

The Kansas City Star accepted three of RFA’s activists who will all be tasked with finding solutions to gun violence. These solutions will not involve locking up the shooters and throwing away the key. One of the RFA activists at the Kansas City Star is Humera Lodhi, a Muslim blogger at the Huffington Post, with a fellowship at the Marshall Project, a left-wing pro-crime think tank that blames gun violence on guns.

The Star not only managed to bring in an activist who is funded by one left-wing organization, but two left-wing organizations, while having her cover the very area of advocacy that is a major focus of the second organization. It’s hard to imagine how this arrangement could be any more biased and unethical. But there’s little doubt that Report for America will find a way.

Report for America is an initiative of the Ground Truth Project, a non-profit, which is partnering with for-profit papers, and the Project was born out GlobalPost, a for-profit organization. GlobalPost was going to use GTP to produce reporting for it. This conflict of interest went national when GTP was spun off into its own non-profit and RFA is used to seed content into for-profit publications.

Despite its peans to journalism, dumping a few activists into local papers and then paying half their salaries won’t keep local news alive. If anything, it will help alienate more of the remaining subscribers. RFA is just another venture by former journalists to monetize the last remains of journalism by turning it into a political weapon. There’s not much money in journalism, but lots of cash flowing into politics.

Corrupting, prostituting, and weaponizing journalism is helping destroy what little integrity it has.

RFA is eliminating what little difference there is between the media and political activism. It’s not alone in the field, but it’s the most successful organization and has the best financed of any of its rivals. Its founders have seen the bright future where journalism is a vestigial limb of political non-profits who instead of buying election ads, buy the whole paper without having to manage it or pay taxes on it.

And the whole thing is funded by the dot com monopolies who helped destroy journalism.

You Might Not See It, But Joe Biden's Ego Is Massively Bigger Than Trump's