But the real question is what sort of people want an answer to that question? 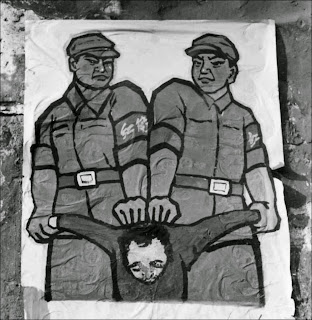 Informing on your friends and neighbors used to be something that the socialists on the other side of the Iron Curtain used to do. What kind of people, we used to wonder, do things like that?

Wonder no more. Cities and states across the country have made it the hour of the aspiring informant. If you always longed to live in Cuba, North Korea, or the USSR, all you have to do is dial 1-800-INFORM.

The smiling Los Angeles boss who, despite the order to close barbershops and hair salons is neatly coiffed, warns that “business ambassadors”, an Orwellian euphemism for enforcement agents who shut down businesses, will visit non-compliant businesses, followed by personnel from the Crisis Response Team, followed by law enforcement showing up, and then the barbers will be tossed into prison.

In New York City, on the other side of the country, informing on anybody violating social distancing is as easy as taking a photo with your app.

“Now it’s easier than ever,” Mayor Bill de Blasio, whose hair is also suspiciously styled, informs gestapo gothamites. “When you see a crowd, when you see a line that’s not distanced, when you see a supermarket that’s too crowded, anything, you can report it right away. All you’ve got to do is take a photo, put the location with it, send it, and bang, we will make sure that enforcement comes right away.”

If only Stalin had smartphones.

Governor Andrew Cuomo announced a PAUSE Enforcement Assistance Task Force taking down denunciations from informers by phone and online. And the Empire State Stasi also welcome, “photos and video of illegal gatherings.” Perhaps they might be interested in Cuomo’s endless conferences.

“We want local governments to enforce social distancing rules. I want to be more aggressive with enforcement because the evidence shows that people are violating it now more than ever before,” the New York boss barked.

CNN’s Chris Cuomo was caught out of quarantine in the Hamptons with his family despite his coronavirus infection. Even as his brother had announced $1,000 fines, Chris Cuomo traveled to his Hamptons place and was allegedly out and about. “Your brother is the coronavirus czar, and you’re not even following his rules — unnecessary travel,” someone asked him.

But there’s no point in reporting the members of the nomenklatura. Every single mayor and governor who has shut down barbershops and hair salons is boasting obvious haircuts. Some, like Chicago’s Mayor Lightfoot, got caught getting their hair done. But all you have to do is look at the others.

Lightfoot’s administration wants reports of non-essential businesses staying open so she can levy $10,000 fines. Just don’t bother reporting whoever it was cut and styled the mayor’s hair.

“Investigators have been responding to complaints,” Mayor Lightfoot declared. Just not about her.

It’s not just New York, Chicago, and Los Angeles. Informing on your friends and neighbors is a nationwide trend where smartphone technology meets classic commissarism.

Chula Vista, CA advertises that its official app can be used to report “groups not-adhering to the COVID-19 stay-at-home directive” in both English and Spanish. Santa Clara, CA has set up a public health referral email address at the DA’s office and is urging rats to call or email.

In Hays County, TX, Judge Ruben Becerra was asked how he plans to keep “non essential customers out of Lowe’s , Home Depot and other stores”. He replied, “Call the police in the city the store is located. My order comes with a fine. Take pics. Get proof.”

Becerra is a Democrat who had wanted a grant to protect illegal aliens.

Mayor Lauren Poe of Gainsville, FL has urged residents to report gatherings. Kansas City cops have deployed a hotline. The Houston Mayor’s Office is asking citizens to “report non-essential entities violating current #StayHomeWorkSafe orders.” Harris County, TX has its own number for reporting “non-essential entities”. A potential difference between non-essential businesses and entities is that the latter can refer not just to stores and companies, but to any kind of organization.

The wave of cities unveiling snitching hotlines, websites, and apps isn’t the most depressing thing.

Many of these are a response to 911 and city numbers being overloaded with calls from informers eager to rat out their friends, neighbors, and anyone else they’re not happy with.

The true tragedy is not that government bureaucrats want people to inform on their neighbors, it’s that so many people are eager to do the informing. Totalitarian systems are a lot easier to defeat than the internalized totalitarian mindset that we have seen in socialist countries around the world.

It takes very little searching to find countless social media queries by people seeking to inform on others. They eagerly include photos and video in their denunciations to the authorities.

By early April, 500 complaints about non-essential businesses had come into Chicago. The authorities didn’t have to intimidate anyone into filing these complaints. As in Vegas, people were eager to do it.

People eagerly reported bars and hair salons staying open, along with businesses deemed essential, like auto shops. We have met the enemy and he was living on our block and in our neighborhood all along.

The socialist isn’t an alien from another planet. He has a foul corner office in the human soul.

Americans are not fundamentally different than East Germans, North Koreans, or Russians because our values are in our DNA. It takes a crisis to quickly find out that they’re not in our blood, but in our souls.

We are different to the extent that we cherish the values of individuality and independence.

While it’s easy to spot the difference between the American and the un-American responses to the pandemic, it’s become hard to find an American baseline to measure the anti-Americanism against.

One place to find it may be in Tennessee.

The “response of Tennesseans has been powerful. The need for enforcement in our cities hasn’t been there,” Governor Lee replied.

People of goodwill can disagree about coronavirus policy, what the scale of the lockdowns should be, when they should end, and whether the lockdowns were ever a good idea to begin with. But every American ought to be able to agree that most people will voluntarily act in the best interests of their loved ones, their friends, their neighbors, and their communities. And that the answer to disagreement is not to roll out apps and hotlines for informing on our neighbors who are just trying to earn a living.

The blue state response to the coronavirus has been ugly, dystopian and un-American. Elected officials have dismissed the Bill of Rights as an irrelevancy, forcibly closed down houses of worship, harassed and threatened worshipers, arrested political protesters, and declared that protests are non-essential.

That is not America.

In East Germany, the Communists built a collective of informants. In the Soviet Union, informing on your neighbors and even your parents proved your loyalty to the state. This behavior has no place here.

It is no coincidence that the 1-800-INFORM phenomenon has taken root in the blue parts of the country.

The culture of informants values the collective and suppresses the individual. To the socialist, governments never fail. The experts are always wise and the public officials all-knowing. Government only fails because individuals subvert, sabotage, and undermine its well-meaning efforts. The informant helps the authorities redirect the blame for their failures by locating individual scapegoats.

A nation of informants can only arise in a socialist system where people put the state first. They scowl and plot against their neighbors, spying and informing on them for the freedom they feel in their souls.

The pandemic is a threat to the body of the nation, but 1-800-INFORM threatens the soul.

Ann-Marie Murrell: How Fast-Spreading Viruses Almost Killed Me in 2018 (and How I Survived)