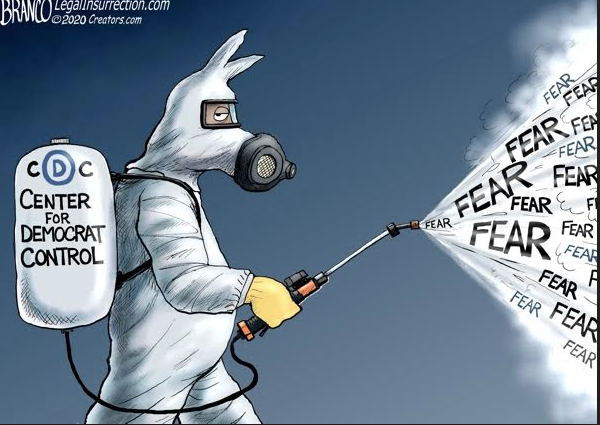 There is a rather lengthy article at Politico.com discussing Climate Change and the opportunities presented by the Covid-19 pandemic to exploit its effects to further the cause of climate alarmism.

Throughout the article author Michael Grunwald lamented the fact that many within the alarmist community were de-emphasizing personal sacrifices in support of climate change mitigation and shifting the narrative to one that suggests that individual effort having insignificant impact on emissions and therefore were a waste of time and effort. What is needed, they say, is greater effort to bring corporate polluters and politicians to heel regarding policies, incentives, subsidies, and technology improvements that resulted in systemic changes to our society. You know, things like the Green New Deal!

Grunwald also suggested that this shift of emphasis was ill-advised and maintains that personal commitment being ignored allows hypocrisy to prevail and that would have a detrimental impact on the movement’s credibility. What they fail to do is provide one single verifiably scientific fact to support the entire issue that the earth is in danger from CO2 or that climate change (as they define it) has anything to do with hurricanes, brush fires, major storms, or seismic activity that might have occurred in the past 50 years or more.

The entire essay makes repeated references to the dangers and threats from climate change that we are faced with and makes a point of stating that the Covid-19 pandemic produced such a reduction in emissions that the Himalayas could be seen from India again, and Los Angeles air was clearer than it had been in a long time. The fact is India’s emissions problem go far beyond CO2 concentrations as it is one of the most polluted countries in the world because of concentrated use of coal as a fuel for power generation. The fact is many millions of people in India could not afford to heat their homes without power being generated by either coal or nuclear energy.

Obviously, nuclear energy is the only existing, consistent source of pollution-free, affordable energy that exists at this time. Yet rarely does nuclear energy get so much as a nod from the climate alarmist. Could it be that there is an underlying agenda that drives climate alarmists other than the “good of Mother Earth?”

Apparently, eating meat has become a major part of the evils of climate change, too. The writers expressed concerns over the need to eliminate the use of beef in favor of vegetable-based “meat substitutes” (yuck!) in order to reduce methane emissions from cattle. Never do they mention how they would eliminate millions of cattle from the earth because that is the only way they will stop producing methane (whether eaten or not). In the next sentence, they point out that chicken has become more popular causing a near thirty percent reduction in beef sales over recent years. One would think that such a drastic drop in beef consumption would prove adequate that people are contributing to the cause, but they always want more…and more…and more. Besides, if chicken is becoming increasingly in demand as a food, wouldn’t raising far more chickens produce far more animal waste than they have produced in the past? Seems like trading arsenic for strychnine. Not to mention the fact that chicken is O.K. but a thick steak still has no equal.

Covid-19 has, in fact, taken society back a ways from where we were last Christmas, but only a willful effort to force a mandatory shift down in our standard of living to support the fictitious belief that our planet will somehow die because there is a miniscule shift in the overall temperature will prevent a full recovery.  The commonality between Covid-19 and climate alarmism is – in my humble opinion – the fact that both have been co-opted by the same ideology as an opportunistic effort to destroy our economy and re-distribute our country’s wealth to the far corners of the earth (with a little off the top for the elite who pull the levers of power behind the curtain, of course). Why else would Speaker Pelosi include elements of the climate agenda in a relief bill intended to counteract the detrimental impacts of the virus pandemic on our national economy?  “Never let a good crisis go to waste” comes to mind frequently these days.

In spite of all the handwringing about tactics, the bottom line of climate alarmism is the fundamental alteration of our societal standards.  The desire is to move society back about a century and a half to horseback travel and an agricultural economy…you know, like a third world country of today.  But to the left, that is a good thing.  Facts don’t matter if it gets them to the point where everyone bows down to the god that is government.

I will end this with a challenge…Bring me the scientific evidence that supports the alarmist agenda and the facts that confirm the threat claimed to be presented by so-called climate change being man-caused and I will publicly apologize right here for all to see. So far, all I hear is crickets.

Losing More Than We Gain