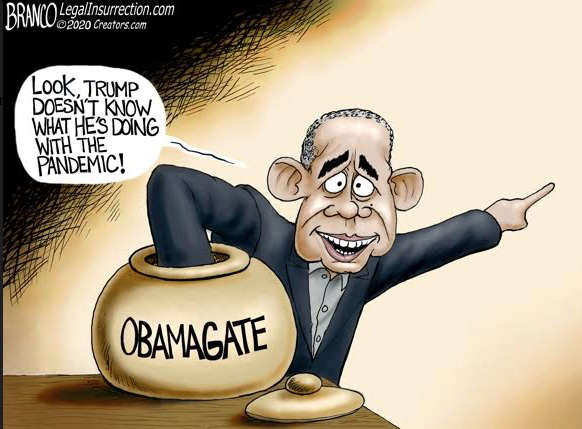 The best defense is a good offense. That’s the playbook used by Barack Obama, Joe Biden, James Comey, and most of the others involved with trying to overturn the 2016 presidential election results – and the Democrats who are helping them cover it up.

At long last, we have an Attorney General who is applying integrity and the rule-of-law to find, investigate, and, hopefully, prosecute rather than playing for political advantage.

But, so far, the Democrat response is that it’s all Donald Trump’s and Bill Barr’s fault. They’re the ones undermining the Constitution, breaking precedent, and using government to persecute their enemies.

House Intel Chair, Adam Schiff, of course, is leading the charge. He’s the same guy who said on no fewer than 50 separate occasions he’d seen evidence that proved Trump was some kind of Russian agent.

Here’s a short version of the real story.

During the 2016 elections, Hillary Clinton’s campaign paid for a phony dossier on Trump which was largely mis-information supplied by Russians. That dossier was repeatedly discredited, but the FBI, even knowing the dossier was false, used it to apply for a FISA wiretapping warrant on Trump campaign staffers.

FBI Director James Comey led the charge, allowed his office to lie to the FISA court, and started down the path of Russian collusion even though not one single person in the FBI believed a single word that was in the phony dossier.

James Comey didn’t stop with lying to the FISA court though.  Following the election, apparently with the full knowledge and approval by Barack Obama and Joe Biden, Comey went after President-elect Trump’s National Security Advisor, Michael Flynn.  In a routine, and perfectly proper phone call consistent with his role as transition director for national security, Flynn talked with Russia’s ambassador to the U.S.

The FBI recorded the phone call as they should have done.  What the Russian Ambassador says could be important to national security. What they should not have done was release Flynn’s identity to the media.  In fact, doing so is a crime punishable by up to 10 years in prison.

We know, now, who asked for Flynn’s unmasking. It’s a long list of Obama Administration officials — some 3 dozen in all.  Some might have had good reason to know.  Most did not. Low level Treasury officials?  Vice President Biden? More to the point though, no one who read the transcript of his conversation with the Russian Ambassador considered anything Michael Flynn said inappropriate including the FBI who listened in.

What we don’t know yet is who released Flynn’s name to the press. We don’t know for sure why the FBI chose to investigate? Or why they threatened Flynn with a Logan Act Crime — which prohibits Americans from speaking with foreign officials — that has never in history been used to charge or prosecute anyone, is unconstitutional, and doesn’t apply to Flynn’s phone call in any event.

What we do know is that the original agents who interviewed Flynn said he wasn’t lying. We know the FBI was planning to drop the investigation. And we know that just days before Obama left office, he met with Comey, Biden, and his Director of National Intelligence, James Clapper. We also know that after that conversation, Comey and his senior FBI henchman set up Flynn illegally and unethically to take a fall.

All indications are that they hoped to intimidate Flynn into testifying against others in the Administration. People who they also had absolutely no evidence had done anything wrong.

The FBI and the Mueller investigators threatened Flynn, destroyed his reputation, and threatened to investigate, prosecute, and jail his son. With that Flynn finally caved and pled guilty to one charge of lying to the FBI.

The Flynn family lost their home, lost 4 years of their lives, and lost all their savings.  All because of corruption at the highest levels of the Democrat Party. They threw truth away, broke the law, and destroyed a 30 year military veteran and his family.

We’ve also learned in the last few days that some 57 high level Obama officials testified under oath in secret hearings before Adam Schiff’s committee that they had no proof Trump has ever spoken with, much less colluded, with the Russians.

And yet, Schiff went on national television to repeatedly declare he’d seen actual evidence of Trump’s treason.  What’s more, a great many of those 57 high level officials also declared publicly they knew Trump was guilty.

Every one of them lied.  Every one of them conspired to overturn the 2016 election. It was always about hobbling the Trump Administration. Ruining the president personally. Driving him out of office.

And when it didn’t work, when the Mueller Investigation exonerated Trump, Nancy Pelosi picked up the fallen baton and pursued impeachment charges. She unleashed her scorpions, Adam Schiff and Gerald Nadler to create phony charges of Ukrainian quid-pro-quos. They bet that even if impeachment didn’t drive Trump from office, it would further ruin Trump’s reputation.

Democrats and their media allies have done everything possible to cover up the Trump-Biden Administration’s attempts to stage a coup against the duly elected resident of the United States.  They’ve also tried everything they can to distract Congressional Republicans and Attorney General Barr from pursuing the truth about the biggest scandal in American history.

So far, it hasn’t worked.  But there’s still a little more than 5 months till the election. You can bet they won’t stop trying.

Barry Shaw: The Battle for the Reputation of Hydroxychloroquine