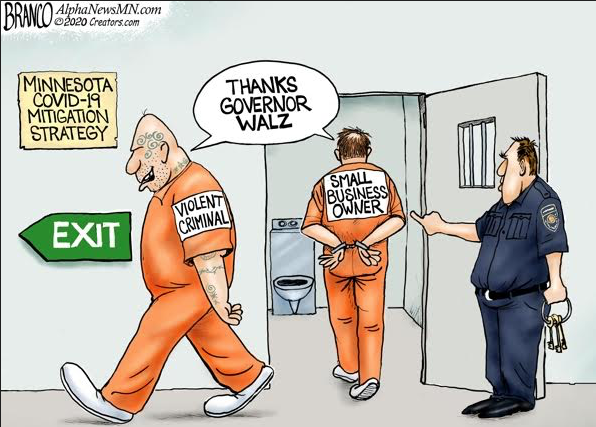 Some states across America are finally starting to reopen.  Others are looking at how to do so. Now that we seem to be ready to return to at least some level of normalcy, it’s a good time to look back and consider how our elected representatives handled themselves.

In many states, churches and synagogues, but mosques were allowed to stay open. In at least one city, Islamic calls to prayer were blasted over loud speakers 5 times per day.  Elective surgeries were mostly canceled, causing many health care centers to face severe financial hardships along with the health care workers they employed. Planned Parenthood abortion centers, however, were allowed to stay open and continue killing unborn babies.

Astonishingly, while hardened criminals were being released to protect them from the virus, moms who took their kids to parks were arrested and put in jail.  A paddle-boarder off the coast of California was cited and arrested even though there wasn’t another human in sight.  One woman was grilled and insulted by police because her young daughter asked her friend next door if she wanted to come out and play.

A woman in Dallas who opened her salon was fined $7,000 and put in jail for a week. The judge, a self-described Democrat activist, scolded the woman calling her selfish, and gave her the chance to avoid jail if she apologized. She refused explaining that it was hardly selfish wanting to feed her children and make sure her employees could feed their children.

What the woman didn’t say, but could have, is that she wasn’t forcing people to come in for a haircut.  Since when is the perfectly legal and voluntary arrangements made between a business owner and a customer considered selfish?

Democrats have been yearning for this kind of America for years. Now that they have the Wuhan virus to blame, they’re downright giddy.

The Governor of Michigan forbid people from buying grass seeds, gardening supplies, or fertilizer.   The sections in most stores where American flags were sold were closed.

Progressives across America ranted that illegal immigrants should receive relief checks form America’s taxpayers despite the fact they made a decision to break the law and cross the border illegally.

Several Democratic governors banned the generic drug hydroxychloriquin. Why? It’s unclear, but it seems mainly because Trump mentioned it favorably at a press conference.

Studies from France indicate it may be an effective treatment in combination with other medicines in up to 91% of cases. Now the Chinese have produced a study that shows Hydroxychloriquine may be more effective than scientists and doctors at first thought. Too bad if you live in a state where the Democrat governor has banned it’s use.

Then there’s the ridiculous efforts by Nancy Pelosi and other Congressional Democrats to load up the coronavirus relief legislation with hundreds of billions to fund a wide array of items off the leftist wish list.  Green New Deal carbon standards. Taxpayer funding for Planned Parenthood. 10’s of millions for the National Endowment of the Arts. 10’s of millions more for National Public Broadcasting. And, of course, the infamous $25 million for the Kennedy Center.

And while Democrats refused for almost two weeks to pass Covid relief for America’s working families and job creators; they were happy to allow themselves a pay-raise, then go on vacation, and ignore the growing needs of the American people.

Despite China lying to the world and allowing the spread of this virus which so far has killed more than 75,000 Americans, many governors and state officials thought it advisable to indulge China’s price gouging and buy masks and other protective equipment from them.

Many cities and states have also imported drones, again from China, to monitor what people might be doing in their backyards and other places inaccessible to police vehicles. Cops in riot gear; armed with automatic weapons, smoke grenades, and armored vehicles, line up along streets to intimidate flag-waving Americans who demonstrate for a return of their freedom.

Most state lockdowns are by executive order of the governor. But when was the Constitution amended to give any politician the right to close businesses without compensation? Deny people their 1st Amendment right to worship and assemble? Close public spaces like parks, beaches, and town centers?

On the one hand, progressives call those who oppose draconian and arbitrary lockdowns Nazis. This was the favored tactic by Governor Whitmer in Michigan.

Other leftists complain that Americans are overly obsessed with freedom. The New York Times recently editorialized against excessive freedom. Facebook, Instagram, and other social media platforms have started deleting posts by those who express concern we’re losing our freedom.

One gets the sense the left is actually miserable that many states are starting to open up. They’re autocrats.  They love control, and can’t get enough of it. For them, freedom can ring all day long, but they aren’t answering.

Let this be our wake up call. I advise two approaches. First, stay safe and use common sense.  Second, vote these petty autocrats out of office before the new normal in America looks any more like China and Cuba than it does the old normal where personal dignity was paramount, individual responsibility counted more than government dictate, and freedom was valued.