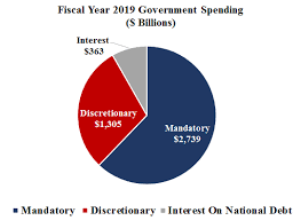 A recent article appearing on The Epoch Times (here) speaks in laudatory terms about an “effort” by two fiscal watchdog groups (one conservative and one progressive) to come up with some “substantial budget cuts” that would begin to address the enormous monster lurking in the Washington Swamp but more commonly known as the federal debt and continuing budget deficits.

To suggest that the proposed cuts are “substantial” is certainly gratuitous. In fact, when you examine the terminology, the time-frames covered by the cuts, and the total federal budget for one year (2019) you begin to see how the shell game works.

When discussing the spending habits of the federal government, it is common to speak in terms of fiscal year total spending – ONE YEAR. However, some clever bureaucrat somewhere in the swamp eventually came up with some slick camouflage to make discussions of budget cuts much more appealing to uninformed members of the citizenry.

Whenever you see proposals for “massive” budget cuts to make the politicians look like they are really trying to do the right thing, it is always couched in terms of budget cuts over the next ten years (not one year). Thus, paltry cuts of $80 Billion per year become $800 Billion (almost $1T), but over a ten year period.

This coalition proposing bi-partisan efforts to reduce the deficits has chosen to adopt this approach to make their effort look like they are worth considering. They are barely a blip on the screen of the federal spending. After all, $800 Billion is not even enough to cut one year’s deficit spending much less take one dime off of the total federal debt of $24 Trillion as it sits today. Tomorrow the goal is that much further away.

So, what’s the answer?

Much of the problems we lament about the federal government can be laid at the feet of 100+ years of judicial activism and abandonment of constitutional limits on the federal government’s reach into our day-to-day life. A recent Supreme Court decision has offered a glimmer of hope to begin reversing that trend line from one of growth to one of declining spending as well as influence. After all, the Tenth Amendment is clear in its intent to limit the national government to specific enumerated responsibilities. Those are clearly stated in Article 1 and 2.

So let’s take a look at some real numbers. 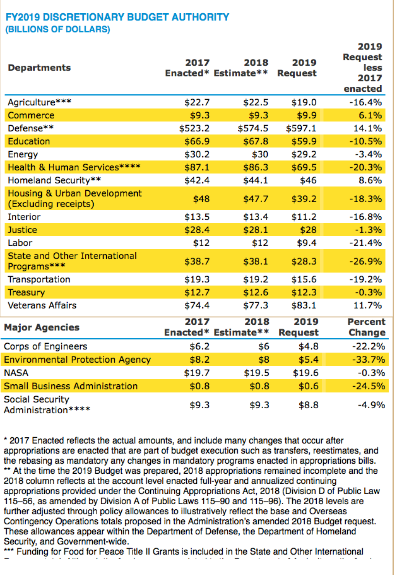 This chart shows the 2019 federal budget by cabinet department. The following departments are either totally or partially outside of the enumerated powers of the federal government and thus are technically illegal. Yes, the only justifications for those departments are improper legislative actions and support for those actions by judges who do not understand their limited power to evaluate the actions taken under Articles 1 and 2 of the constitution and whether those actions follow the constitution’s limitations. Many of these poor rulings were made decades ago and have, until this week been protected by a legal principle that suggests that precedent set by previous decisions of the Supreme Court cannot be over-ridden by another court later on. This has been responsible for the perpetuation of federal growth over the entire 20th Century. The recent decision correctly states that when a previous court makes a decision that does not follow the constitution, then it is the obligation of the present court to overrule that decision and make the right decision that meets constitution muster.

That having been said, follow along as we look at what can/should be removed from the federal budget: Agriculture (not mentioned in the constitution – justified under the “commerce clause” which has been used incessantly to expand the government)

Commerce (only mentioned in the constitution as a means to maintain balance between the individual states and prevent one state from taking advantage of another. It was never intended to exist just to come up with ways that allow the federal government to take more control of our food, goods, and other necessities). The only legitimate purposes for the Commerce Department are the Patent Office, the Federal Trade Commission (markets), and an office to oversee disputes between the states regarding attempts to gain advantage from one over another. These functions are all related more to Justice Department functions and could easily be absorbed into that Department.

Education (There is nothing, other than the whim of President Carter, that expanded the feds into the education realm. Nowhere is it mentioned in the constitution).

Energy (Another department justified by a transient concern that has never actually done anything connected to its intended function – to make the United States energy-independent. That was recently achieved solely by market and private innovations).

HHS & HUD (both of these departments are completely justified by the erroneous interpretation of the so-called “General Welfare” clause in the constitution which was clearly intended to mean the welfare of the several states, not the people within those states.

Labor (another bureaucracy justified only through the general welfare clause. Any regulation of labor should be either market driven or at the discretion of each individual state).

Transportation (only justified within the limited scope of the Interstate Highway System, the FAA, and military requirements). The excursions into vehicle safety requirements, emissions equipment requirements, and similar issues have done more damage to our free enterprise system than they ever should have been allowed to do. That’s not to mention how much it has added to the cost of your car.

EPA (while not a cabinet department, it is far reaching in its influence, all of which is duplicated by each of the states’ Environmental Protection Departments. There is no justification for it under the federal constitution).

Now, how does that compare with the $80 Billion proposed by the bi-partisan group? Multiply that by ten years and you are looking at a cut in actual dollars that is worth $2.571 Trillion. Because much of the problem with federal debt is caused by Social Security and Medicare/Medicaid, even these proposed cuts (eliminations) to federal departments would be insufficient to fix the problem. Add to this the looming problem of inflation that could well be ignited by the ridiculous spending justified by the current pandemic and you have a prescription for disaster.

But as long as groups that claim to support responsibility in federal spending actually only proffer token lip service without addressing the systemic malady that plagues Washington, we need to buckle up and prepare for a seriously scary ride in the coming decade.

As a footnote, there are other savings to be achieved through judicious re-alignment of several other departments such as Homeland Security (not needed if it were all placed under the Justice Department and run by the Director of National Security), SBA (could easily be turned over to the private sector), and elimination of the Federal Reserve System, returning control of our fiscal and monetary decisions to the Treasury Department (where they belong) could also offer much potential benefit by forcing restraint on federal spending. I could go on, but the beauty of cutting out the un-constitutional functions not only saves money, it offers something else to the American citizen…MORE FREEDOM.