The Stars and Stripes Forever PAC has spent almost 5 years now carrying conservative messages to the black community. We started with the successful movement to draft Ben Carson for president. When he dropped out, we shifted to support Trump.

Joe Biden’s recent comment about who’s black and who’s not based on their political preference shows exactly what we’ve been saying all that time. 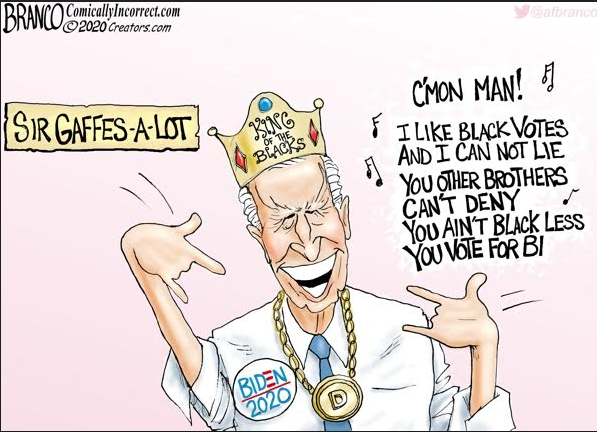 “You’ve got more questions?” Biden asked in a recent radio interview. “Well, I tell you what, if you have a problem figuring out whether you’re for me or Trump, then you ain’t black.”

With his comments, Biden admits what we all know: Democrats think they own black voters.

Even those who defended Biden’s remarks mostly do so by claiming Democrats deserve black votes because they’ve spent trillions of tax dollars providing handouts.

Biden’s campaign spokesperson said, “…let’s be clear about what the VP was saying: he was making the distinction that he would put his record with the African American community up against Trump’s any day. Period.”

Jemele Hill, a staff writer for the Atlantic, said, “I don’t have a problem with the statement because he was clearly referring to this from a policy and track record standpoint.”

Democrats think they own black votes because they’ve bought them plain and simple, albeit with other people’s money.

If you were being honest, you would call it what it is: electoral slavery.

At Stars and Stripes, we’ve been saying blacks are right to be disappointed and angry. Democrat efforts to buy off black voters with more government programs has only worked to make blacks worse off.

Democrats have been in charge of most of America’s largest cities for decades, and everywhere that’s true, blacks live in poorer neighborhoods, receive worse healthcare, attend underperforming schools, and are more impoverished.

At the national level, black incomes still lag behind whites even though that started changing for the first time in 5 decades during Trump’s first 3 years as president. Likewise with the disparities between home ownership, new business start-ups, and access to investment capital.

The truth is Democrats pay only lip service to these and other issues because it’s all they can do.  Their coalition prevents them from making structural reforms to address the real issues underlying these problems because their base is situated in such a way to cause cross pressure against meaningful action.

Look at education. Ideas like vouchers and charter schools give black students the real opportunity for a better education. But Democrats can’t support those ideas. Charters and private schools aren’t unionized so the public teacher unions won’t let them.

Teacher unions give 90% of their political donations to Democrat candidates. Democrats aren’t about to support charters or vouchers if it means crossing one of their biggest contributors — even though Democrat leaders send their own kids to charter and private schools.

Democrat leaders generally support a path to citizenship for illegal immigrants and looser border controls. They must do so because they believe it helps them get Hispanic votes. But for blacks and Hispanics both, it means more gang activity in minority neighborhoods and fewer job opportunities for young blacks just starting on the economic ladder.

Democrat leaders wouldn’t dream of bucking the abortion lobby which is nearly 100% Democrat even though a third of abortions in America kill black babies.

Key elements of their coalition also require Democrats mostly oppose business tax reform that creates jobs, and incentives that encourage businesses to locate in black communities. They can’t do so because leftist local Democrat politicians won’t let them. Neither will public employees who thrive by increasing regulatory pressure and far-left progressives who resist even the mention of lower taxes on job creators and investors.

And forget about their supporting policies that encourage marriage and stable family formation. Other than encouraging young women to get abortions, Democrat policies subsidize moms who stay single and have kids. They’re too beholden to the poverty industry to do otherwise.

As Joe Biden’s “you ain’t black” comment shows, his party has spent so much effort buying off groups of voters, they can’t really get anything meaningful done to improve those voters’ lives other than give them tax money.

As a result of all the money they’ve doled out, they think they own black voters. But they also think they own teacher voters, union voters, public employee voters, Hispanic voters, gay voters, #metoo voters, pro-choice voters, college-debt voters, Obamacare voters, and an endless list of others.

Biden’s comment was a terrible and shameful slur. But at it’s core it was really a slur against himself and the other leaders of his party who have worked so cynically to get control they’ve made it impossible to use their power to truly benefit those that helped them gain it.

Blacks are waking up to this fact thanks to the obvious arrogance of people like Joe Biden and groups like Stars and Stripes who are delivering conservative messages of growth, opportunity, and prosperity. It’s time the rest of us saw Democrat political cynicism for what it is: a blatant disregard for America’s people and a naked grab for political power for nothing more than power’s sake.